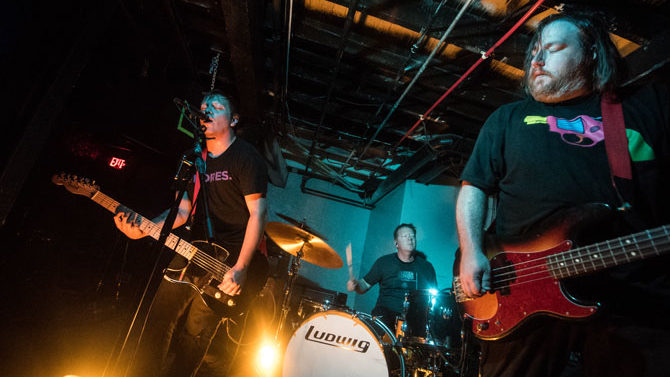 For more than 20 years, there have been discordant, guitar-driven bands scattered among Athens’ more ballyhooed indie-pop acts. The post-Nevermind ‘90s was a goldmine, with the city churning out criminally underrated math-rockers The Martians and sludge-rock legends Harvey Milk, just to name two.

Noise-rock never went away completely after that halcyon era, though at times it has been shoved to the fringes of the local underground. In the past year, a small but dedicated crew of Athens noise-rockers has scratched and clawed its way to prominence, on the home front and beyond.

Vincas, The Powder Room and Motherfucker are at the forefront of this revival. All three bands are culled from a pool of musicians who, for the most part, cut their teeth playing intricate math-rock, providing these skilled players with a less dissonant yet harsher form of expression.

When Chris McNeal (bass, vocals), Scott Kviklys (guitar, vocals) and Joe McMullen (drums) formed psych-rock trio Vincas in 2009, they lacked a support system of like-minded locals. “We were around before these other bands existed, so we at first were the super oddballs who played with weird pop bands,” McNeal says. “Now, we can all play together in Athens on a Friday night and pack the Caledonia.”

The Powder Room provided Vincas some much-welcome company in 2012. The band’s sonic homages to Chicago’s “pigfuck” scene—Scratch Acid, The Jesus Lizard, Big Black, et al.—had new drummer Patrick Ferguson clamoring to join forces with Gene Woolfolk (guitar, vocals) and Bubba McDonald (bass) earlier this year. “I think we fit with a lot of those bands,” Ferguson says. “But I don’t want to tell my dad that the music I play is ‘pigfuck,’ so I think I’ll go with noise-rock.”

Motherfucker formed from the ashes of Incendiaries as an excuse to play SlopFest 2013. That supposed one-off was too much fun and netted too many show offers for Erica Strout (vocals, guitar), Mandy Branch (bass) and Erika Rickson (drums) to abandon ship. Within two years, the band’s high-octane, riff-laden assault made it a go-to act for Atlanta promoters seeking opening support for the likes of Obits, Melt-Banana and even Mastodon.

“All the ladies from Motherfucker have been in bands for many years,” McNeal said. “It’s cool to see them hit their stride now, and it seems like this is the band they’ve had the most fun with. Not that their other bands weren’t good, but you could tell early on this was something special.”

Though the digital age has homogenized scenes far and wide, it was Athens’ college-town charm and bevy of subcultural capital that allowed these bands to swiftly cultivate a mutually beneficial support system. “Because it’s a small town, a lot of the people that are into the same things are around each other often and into each other’s bands,” Rickson says.

Spreading their sound beyond Clarke County has brought each band validation outside of their shared group of friends. “It’s cool to see your buds kicking ass out of town,” McNeal says. “Everyone is making strides to get out of the city, even if it’s just playing Atlanta more often.”

The fruits of playing out-of-town shows include promising label deals. Motherfucker’s 2015 debut album, Confetti, was issued by Chicago-based Sick Room, while both Vincas and The Powder Room will have albums released next year by Minneapolis’ Learning Curve—a deal facilitated for Vincas by Atlanta pals Hawks’ lead singer, Mike Keenan.

Outside interest helps at home, too, as it lets fellow touring acts in on a local secret. “Locally, we’ve played with Destruction Unit and bands like that, where in previous years they might have skipped over Athens,” McNeal says.

With each band working on new material as 2015 ends, don’t expect the noise-rock surge to come to a screeching halt anytime soon. “We do what we do because we have to,” Ferguson says. “I tried to stop playing music for about two years, and I was miserable. It’s my blood-pressure release valve. It’s like malaria—you’re still a little sick, even when you are playing.”