Trombone Shorty is All Over the Map 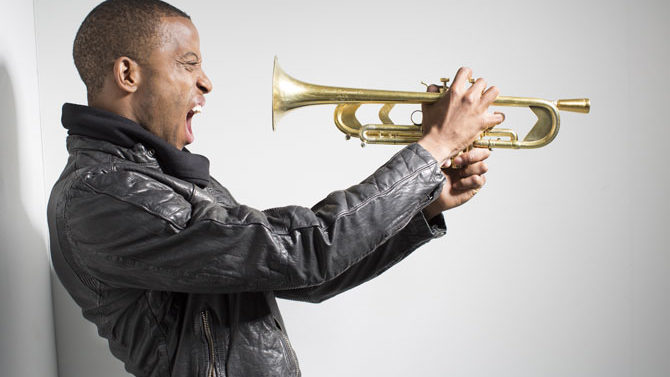 Few musicians possess the versatility of Troy Andrews. The New Orleans musician, better known as Trombone Shorty, embodies the vibrant pastiche of NOLA jazz in a way that bears little resemblance to the bustling second-line marches associated with the genre. His career arc zigzags between Lenny Kravitz and Bone Thugs-N-Harmony, Green Day and Galactic, Eric Clapton and Rod Stewart, giving the world an entry point into New Orleans through any number of styles.

As a child growing up in the Tremé neighborhood famous for its brass bands, Andrews wanted his music to resonate past the physical and stylistic boundaries of his hometown. “When I was a kid, I wanted to my music to have some kind of impact like Michael Jackson had,” Andrews says. “Everyone loved his music, so that was always a goal of mine.”

His current band, Trombone Shorty & Orleans Avenue, uses that desire for mass appeal as its defining ethos. His set lists defy any classification, finding more common ground with the modern jam-band circuit than traditional New Orleans sounds. Green Day’s alt-anthem “Brain Stew” has become a staple of Andrews’ live performances, and covers ranging from Lil’ Kim’s “Magic Stick” to The Meters’ “It Ain’t No Use” flow seamlessly with his original material.

The flurry of disparate genres and styles makes sense to Andrews. “I have New Orleans music at heart, but I also play things I grew up listening to,” he says. “My music is a representation of where my life has been.”

Despite his band’s geographically specific name, Andrews says his style comes from a fascination with music from all over. “There’s no burden [to represent New Orleans], because I’m doing my interpretation of what I’ve learned in this great city,” he says.

Andrews started playing music at an age when most kids are still working their way around a toy glockenspiel. At 6, Andrews was leading his own brass bands, and by 8, a club in Tremé was renamed “Trombone Shorts” in his honor. Before he could buy alcohol, Andrews shared the stage with Kravitz, touring the world and following his pursuit of musical perfection.

Performing with heavyweights from a variety of backgrounds provided a challenge for Andrews. He struggled to form his own distinct voice as a sideman, where his technical prowess served as a way to highlight someone else’s vision. Even with Orleans Avenue, Andrews labors to find cohesion with a band that can excel in any genre.

At the same time, Andrews’ flexibility charges his music with a sense of spontaneity, giving a distinct energy to his live performances. Keeping that energy alive and fluid is crucial considering his band’s lengthy tour schedules. In 2014, Orleans Avenue performed nearly 100 shows, traveling as far as Brazil and hitting up the festival circuit along the way.

“Even though we have tight arrangements, we still leave a certain amount of space for anything to happen,” he says. “When we improvise, we have no idea what we’re going to do, and it makes it fun and it keeps us on our toes.”

Andrews’ original work re-imagines long-form jazz improvisation in a variety of contexts, drawing on the rhythmic complexity of jazz soloists with songwriting steeped in the repetition of pop music. “Hurricane Season,” one of his most popular singles, hinges on two bluesy melodies, propped up by a head-banging backbeat straight out of ‘80s stadium rock. The juxtaposition of his dazzling solo with his drummer’s familiar rock and roll crunch gives the song a rare crossover appeal—technical enough for jazz heads, yet simple enough for average listeners.

At 29, Andrews’ career has hit enough milestones to satiate the goals of even the most ambitious musicians. But childhood memories watching Michael Jackson light up audiences keep his aims humble.

“When we we play music, it’s beautiful to see the people come out, from 5-year-old kids to 80-year-old grandparents,” he says. “ I want to reach as many people as I can, and have my music be open to anybody.”