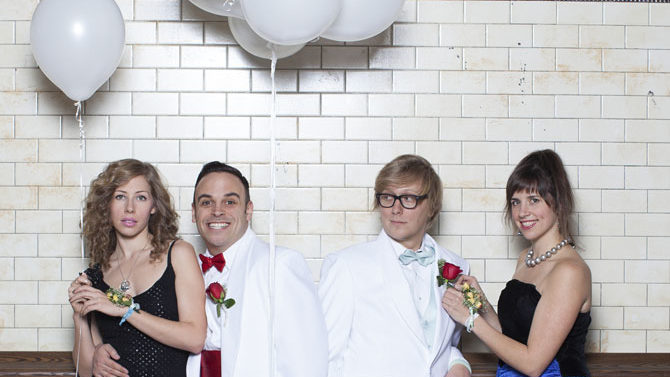 Lake Street Dive was playing tiny bars long before Carnegie Hall seemed possible. Over the last two years, the soul-rock quartet has graduated from that small-time life, blazing through the late-night television circuit and headlining sold-out shows. The group’s near-overnight success is due in part to the spread of a YouTube video, but Lake Street Dive’s greatest asset is its ability to breathe new life into well-worn influences.

Lake Street Dive’s grassroots following had been growing steadily since singer Rachael Price, bassist Bridget Kearney, trumpeter Mike Olson and drummer Mike Calabrese linked up at the New England Conservatory of Music in 2004. The band’s fanbase multiplied in 2012 after its stripped-down cover of the Jackson 5’s “I Want You Back” picked up steam on YouTube. The momentum carried Lake Street Dive’s third studio album, the lush Bad Self Portraits, to a level of fame its members never expected.

“We would gasp every time we were on stage and there were people shouting out what songs they wanted to hear,” Kearney says. “It was crazy after nine years of not having that happen.”

Like the rest of the band, Kearney came to the New England Conservatory to study jazz and ended up making a living by crafting accessible pop tunes. Even though heady conservatory training isn’t what shines through on tracks like the Bad Self Portraits standout “You Go Down Smooth,” the band’s knack for synthesizing technical prowess into catchy melodies is the heart of its appeal.

“We never wanted to dumb music down,” she says. “We wanted to use [our training] when it’s really tasty and paints the picture more vividly, but not for the sake of doing something cool and technical.”

“Tasty” may be the perfect description for the group’s music. The resonant croon of Price’s harmonies, Kearney’s slinking bass lines and Calabrese’s tasteful rhythm chops create a soothing cocktail of rootsy pop that’s easy to enjoy. As a whole, Bad Self Portraits benefits from the fact that it was written by a group unaware of its impending success. Its songs were written at various points in the band’s career, reflecting its modest, street-corner roots.

“We definitely went into the studio with no outside pressure for that record,” Kearney says. “We were making music for no one else but ourselves, which is the ideal way to make a record.”

Like any jazz band worth its salt, each member of Lake Street Dive carefully accompanies one another, contributing individual expertise without hogging the spotlight. Price’s commanding vocals could easily cast her as a star shooting for the same status as Adele or Amy Winehouse, but every stylistic choice is given its own breathing room.

“It took us a little while to create the language we wanted to speak with,” Kearney says. ”I think a lot of what making a band is involves coming up with an arsenal of tools you use.”

Another measure of any great band is its ability to evolve that stylistic arsenal over time. While Kearney wouldn’t say much about Lake Street Dive’s recently-recorded fourth album, she divulged one crucial detail. A month before the band went on tour promoting Bad Self Portraits, each member traveled to a different country, soaking up its music in the process.

Price visited Israel, and Calabrese went to Brazil, but Kearney took it a step further by turning her visit to Ghana into a separate project. Along with collaborator Benjamin Lazar Davis, she spent three weeks in the capital city of Accra, where the pair studied under the Ghanaian musician Aaron Bebe, who specializes in a xylophone-like instrument known as the gyil. The experience produced a five-song EP titled Bawa, which features the duo exploring a tricky web of polyrhythms unlike anything in Lake Street Dive’s repertoire.

“That part of our musicianship doesn’t make it overtly into Lake Street Dive, but the fact that we’re interested in styles of other parts of the world is always back there,” she says.

Despite the secrecy shrouding the new album, Kearney revealed an instance of her time in Ghana affecting its sound. On one track, a guitar echoes a rhythmic pattern common in Ghanaian drum ensembles. In typical Lake Street Dive fashion, the West African rhythm gets thrown into a Motown-inspired jam. Eleven years into its career, Lake Street Dive continues to experiment and combine styles, in an ongoing attempt to enrich its members’ shared musical soul.