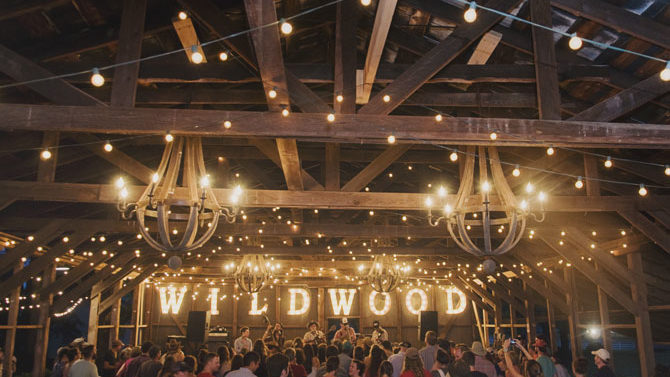 Over the last two decades, the exponential rise in the number of music festivals following in the footsteps of giants like Bonnaroo, Coachella and Lollapalooza has coincided with a divergence from the spirit festivals are supposed to embody. Fans clamor for a kind of post-Woodstock communal experience, yet the idea is propped up by corporate sponsors, massive amounts of waste and the illusion of infinite growth.

On a sleepy piece of pastoral paradise 20 minutes outside of Athens, the contradictions of the music festival boom are being reconciled. Libby Rose, a videographer and festival veteran, saw the perfect opportunity to revive an environmental, community-focused ethos when her family acquired the 30-acre Cloverleaf Farm, located on the outskirts of Arnoldsville.

“I had gone to so many festivals across the country, and saw so much that was missing, and so much I wanted to leave behind,” Rose says, pointing to overpriced, greasy food, long lines and exorbitant water prices as festival staples she wanted to avoid with her new event, Wildwood Revival.

The tiny festival celebrated its inaugural year last July, attracting roughly 300 attendees through social media and word of mouth. The small but fervent crowd enjoyed a display of modern country and folk amidst the sort of backdrop where those genres were born. Established groups like The Whigs and The Whiskey Gentry played in the farm’s open-air barn, providing an intimate experience without sacrificing the luxuries of professional sound.

Wildwood’s first installment was successful enough that a two-day edition was organized last November. As the event enjoyed modest growth over only a few months, Rose’s vision of an environmentally focused festival was put to the test. Sure, she could provide free water, Mason jars, compostable plates and a plastic-free environment, but would attendees care enough after drinking all day and night to clean up after themselves?

Amazingly, Rose’s lofty ideals proved to be successful. “When we went to clean up the campsites when everyone left, we literally found two Mason jars,” Rose says. “I think people respect the land and the farm because it’s just a different setting in general.”

Rose’s experience working at the small-scale Pickathon festival in Happy Valley, OR provided a template for her current endeavor. Pickathon is notable in that it still features some staples of larger festivals, like internationally acclaimed artists and crowds reaching a few thousand, but also an air of sustainability and community support, with a volunteer team devoted to composting, local food vendors and solar panels on top of the main stage.

Rose incorporated many of those ideas into Wildwood Revival. Even more so than the artists, the festival’s non-music amenities make the experience unique. This year, Wildwood boasts an extensive artisan market, featuring everything from local printmakers to butter makers; Sunday morning yoga; and food sourced from farms less than a mile away. Subtleties like a wiffle ball game and the opportunity to get a 19th Century-era tintype portrait create a communal atmosphere absent from larger festivals.

“We wanted it to be like we’re inviting 500 friends over to do what what we’re doing any weekend,” Rose says. “It was about creating that community aspect on a larger scale.”

“It doesn’t feel like a festival as much as it feels like a Southern music party,” Fletcher says. “The origin of the music my band and other acts on the bill play comes from porches, like the house at Wildwood Revival.”

As the festival’s popularity continues to grow (this weekend’s event is sold out), Rose faces the same dilemma confronting so many other festivals: how to square the dueling goals of growth and sustainability. In the future, she hopes to be able to afford bigger name acts like Shakey Graves and Jason Isbell, include multiple stages and add more acreage to the festival grounds. All of these goals seem difficult to achieve without at least some environmental concession. But Rose remains optimistic.

“We’ll never be a Bonnaroo, because that’s just not what we’re after,” she says. “ I know the demand and prices for tickets will be higher as time goes on, but every year we want this to feel like a family reunion.”

WHAT: Wildwood Revival
WHERE: Cloverleaf Farm
WHEN: Saturday, Aug. 29 & Sunday, Aug. 30
HOW MUCH: SOLD OUT!