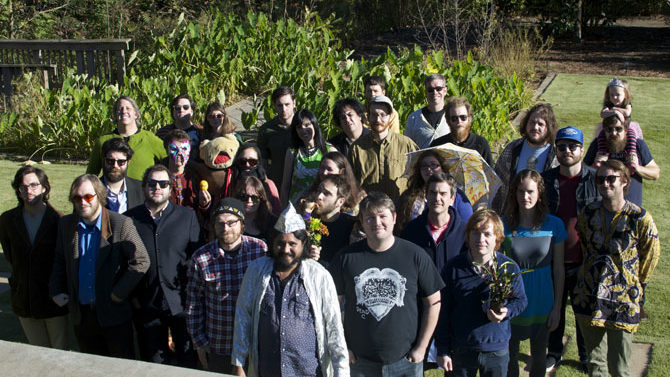 For the third year in a row, local musician, label owner, Wuxtry clerk, tastemaker and all-around lovable dude John Fernandes is set to take over the Caledonia Lounge with his Cloud Recordings Festival. The four-day celebration is designed to showcase Fernandes’ self-owned and operated Cloud Recordings imprint, as well as highlight some of his favorite non-label local acts.

Fernandes started Cloud Recordings in 2001 “in the spirit of of artist-run record labels like Sun Ra’s Saturn imprint,” he says. Initially created as a way to self-release Circulatory System’s debut LP, Cloud would eventually become home to a variety of great Athens bands, including Cult of Riggonia, The New Sound of Numbers, Supercluster and others. After building such a stacked roster over 14 years, the idea of a festival showcasing these acts seemed like a foregone conclusion.

After two successful runs, Fernandes isn’t looking to rock the boat with any major changes or expansions in 2015. “Not much has changed in three years,” he says. “I don’t want to mess with a good thing. The festival has gone smoothly every year. I attribute it to working with very good people.”

This year, there are approximately 30 bands on the bill with no overlap, something that Fernandes believes, along with its jubilant and creative atmosphere, makes CRF one of the more unique experiences in the increasingly crowded Athens festival market.

More so than larger events like AthFest or Slingshot, CRF puts a heavy emphasis on the interconnectivity of the Athens music scene. Many of the bands playing the festival share members, even if their sounds vary wildly. Fernandes, who comes from the notoriously communal Elephant 6 collective, seems to want to emphasize acts that live by the same code.

Like he does year-round, Fernandes will appear on stage with several performers this week, providing his distinguished experimental touch. “The bands are all very supportive of each other,” says Fernandes. “I’m really excited about every band playing.”

Nonetheless, Flagpole asked Fernandes to highlight a few acts he is particularly pumped to see. We took his suggestions and added a few of our own picks to craft an enticing preview of this year’s CRF.

French Exit is a psych-pop project led by Circulatory System and Olivia Tremor Control member AJ Griffin. The group’s sound is in line with the experimental tendencies of Griffin’s past projects, but with a strong accessibility that makes it easy for anyone with even a passing interest in psychedelic music to jump in. The band’s debut album, Jerk Store, released in early October, is one of the most notable local releases of 2015. French Exit’s small amount of material has led to a tight and consistent live set that should be a highlight of the week.

Spillane, of The Gerbils and Neutral Milk Hotel, was added to the bill at the last minute, but for anyone familiar with E6, his set is a must-see. Spillane has been playing shows under the EXP name for at least six years, and his sets are dependably excellent, if a bit understated. You can expect to hear some Gerbils material, but Spillane has plenty of material under the EXP branding that remains underrated—and, unfortunately, unrecorded.

Improvisational cellist Alec Livaditis has become a fixture of the Athens music landscape. Known for his engrossing, textured solo work, Livaditis also frequently plays collaborative sets with other artists to small but passionate audiences. In many ways, Livaditis and Fernandes mirror each other in terms of both artistry and passion for local music. The only difference is that you can find Livaditis working the counter over at Low Yo Yo Stuff instead of at Wuxtry. Friday, Livaditis will perform a solo set as well as a collaborative set with (of course) Fernandes. His debut album is due for release in early 2016.

Indie rock act Summer Hymns garnered critical acclaim in the early 2000s for their relaxing, breezy tunes, which were very much in fashion at the time. The band’s debut, Voice Brother & Sister, is one of the best local releases you’ll find from that time period, though it gets less love than it should. The Hymns haven’t released an album since 2006, and a live appearance from the band is extremely rare, so it would be a shame to miss their set.

WANDA has only been around for a little over a year but has already gained a lot of attention. Just as influenced by the surf-rock of The Beach Boys as by power-pop bands like Apples in Stereo, this pet project of lead singer Avery Draught has been a coming-out party for one of the greater creative minds in Athens. They only have a demo currently posted online, so seeing the group live is your only option if you want to get in on the ground floor of this exciting, E6-style throwback.

WHAT: Cloud Recordings Festival
WHERE: Caledonia Lounge
WHEN: Wednesday, Nov. 4–Saturday, Nov. 7
HOW MUCH: $25 (wristband), $5–7 (per night)