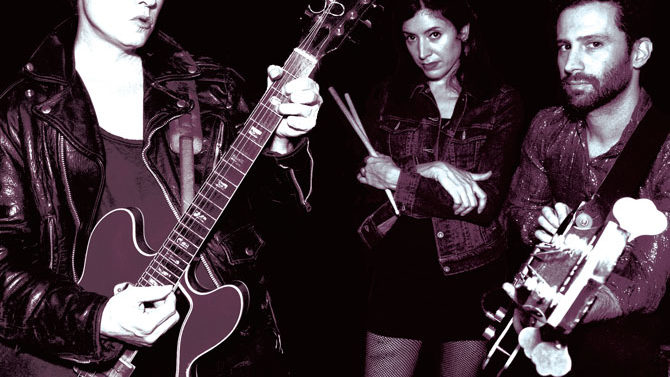 UPDATE: Subsonics have canceled due to a family emergency, according to promoter Nate Mitchell. The show will go on with The Lonely Teardrops from Norfolk, VA as the new headliner, and it is now free. Ticket-buyers will receive a refund. Subsonics have promised to reschedule, Mitchell said.

It doesn’t take much time for Subsonics to get their point across. The Atlanta band’s songs clock in at one minute, maybe two. These are mid-tempo tunes, sometimes laconic, sometimes lurching—good for nursing a hangover or a third drink. Each track is a compact sonic package tied together by Clay Reed’s wry lyrics and the subtle inventiveness of his melodies.

While the songs themselves are quick to deliver, they’re longer in the making. Subsonics formed in May 1992, releasing their first record in July of that year. Subsequent albums have appeared less frequently—2012’s In the Black Spot, the band’s latest, came seven years after its predecessor, Die Bobby Die.

Not that the band doesn’t keep busy. After In the Black Spot’s release, Subsonics spent time on tour with Black Lips, who have gone on record praising them as the best band in Atlanta. Reed recounts playing shows in 12 countries on four different continents. Bassist Rob Del Bueno—who joined the band in 2002—does extra duty in rockabilly mainstay Man or Astro-man?, while drummer Buffi Aguero has another project, Tiger! Tiger!

The band doesn’t overwhelm with volume; Its style is more subtle. As Reed puts it: “We play loud more physically than just making it sound like… that phony kind of loud.”

Listening to In the Black Spot, you can tell what he means. The album has a low-key, muted vibe, like it was recorded through the door of the band’s practice space; the individual elements are all audible but bleeding into one another just the right amount. It’s a warm, muddled mix; an organic sound. Reed says, “The drums are really important, and they don’t have a volume knob.”

Subsonics’ brand of rock and roll is uncluttered and unadorned, proving the enduring appeal of tube amps and spring reverb. Up front, you have Reed’s electric guitar cycling through a few chords, clean save for maybe a hint of distortion. A slight twist on the guitar’s tone knob produces a massive shift. Add Aguero’s straightforward playing—she’s firmly in the Mo Tucker school of drumming, toms and a snare, with minimal cymbals—and Del Bueno’s bass to keep things grounded, and you have music that begs to be heard in a small club.

Speaking of the Velvet Underground, Reed’s songwriting has drawn comparisons to the late Lou Reed, and not without reason. Subsonics’ songs, like much of Lou’s material, tend to feature enigmatic, marginal characters. Tracks like “Dubious Charms” and “High Priest of Nothing” draw their titles from their shadowy protagonists. The figures are sketched lightly with just a few well-turned lines, but it’s enough to fix them in the mind of the listener.

“Headlights” is an In the Black Spot standout, containing not just a memorable character but a compelling hint at a narrative. Reed moves through different perspectives to tell a story centered on a hitchhiker: “You just exist a second at a time/ In the headlights as the cars go by.”

The fleeting image is fitting. Saturday’s show offers a chance for a brief glimpse of a band whose appearance in Athens comes almost two years after its last. Reed notes, patiently, “A couple of years isn’t very long.” Still, sometimes a couple of minutes is all you need.