Why the Melvins Will Outlive Us All 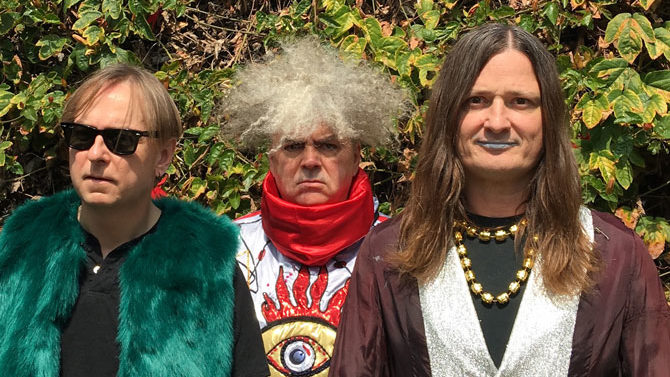 September is here. The leaves are starting to turn, UGA’s football team has already started to temper fans’ expectations, and around the country, Major League Baseball teams have expanded their rosters. The so-called September call-ups raise the cap on eligible players from 25 to 40, and give managers eyeing a playoff run the chance to bring in new talent. These players won’t take on major roles, but will instead try to help the team any way they can. September is the month of the pinch hitter and the utility infielder, the spot starter and the lefty specialist.

How appropriate, then, that it should bring the Melvins to town. The band, now in its fourth decade, has gotten creative with the lineup card of late. Basses Loaded, the group’s latest record, features a total of six different bassists across 12 tracks. If you’re keeping score at home, the players are Steve McDonald, Jared Warren, Dale Crover (who also plays drums), J.D. Pinkus, Trevor Dunn and Krist Novoselic.

Singer and guitarist Buzz Osborne calls the band’s turn to free agency a “happy accident.” “We were recording as usual and then we realized as we were into it that we were going to end up with six different bass players,” he explains in a phone interview. “We decided to call it Basses Loaded, but we weren’t really writing it in terms of all bass-oriented songs.

“We’ve taken some criticism from people that have said, ‘Well it doesn’t sound focused enough, because there’s so many bass players,’” Osborne continues. “Which is a total crock of shit,” he adds in disbelief. “That means if we’d had one bass player do all the songs on the record, it would be more cohesive? That’s insane.”

Opening track “The Decay of Lying” kicks off a trio of bruisers, with Osborne’s ponderous guitar riffs taking the fore. Then comes a changeup: a rough-edged cover of the Beatles’ “I Want to Tell You.” It’s back to the heat after that, Crover’s drums supporting Osborne’s assault, but by the time we get to the closer, a twisted rendition of “Take Me Out to the Ballgame,” the band has snuck in a few curveballs.

One of these is “Maybe I Am Amused,” featuring former Nirvana member Novoselic on both bass and accordion. The track’s lively bounce makes for a nice respite from the rest of the record’s hard gallop, but it’s Novoselic’s only appearance on the record, and Osborne isn’t shy in saying why he isn’t the best fit for the Melvins. Contrasting Novoselic with another player on the album—Steve McDonald of Off!, who is touring with the band—Osborne says, “Steve McDonald’s a real working bass player. Krist Novoselic just kinda does it now as basically a slight hobby.”

Aside from Osborne’s feelings about Novoselic personally, this speaks more to his determination to keep the core Melvins unit to himself and Crover, which goes back to the 2005 departure of bassist Kevin Rutmanis. “When we lost our bass player at that point,” Osborne explains, “we said we were never going to be put in the position where we had to rely on any one person ever again.”

It’s a practical matter as much as anything else. According to Osborne, the Melvins will play about 100 shows this year. And while McDonald is a good fit for now, he says, “I’m way too gun shy to think that there’s some all-encompassing guy for us at this point.” As he puts it, “We’re an actual working band.” For Osborne, it’s most important that things stay that way.

That mentality keeps Osborne from dwelling on the past. He’s quick to put this year’s vinyl reissue of the band’s ’90s output for Atlantic Records in perspective: “That was just one little tiny phase of our career.” He’s happier talking about Three Men and a Baby, a late-’90s collaboration with Mike Kunka that was thought lost but resurrected and released this year. Still, it had been “a record that I’d completely put out of my mind.” He had moved on.

For the Melvins, the main thing is resiliency. “If there’s one thing you can tell about a band like us,” Osborne says, “it’s that we’re survivors.” If frequent lineup changes are what it takes to keep the band going late in the season, so be it. “We will outlive almost anything that happens.”