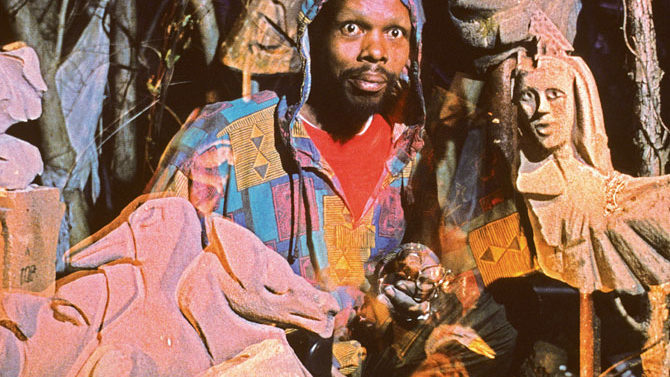 Folk music in the U.S. tends to be understood in the past tense. First there were Alan Lomax’s field recordings, then Harry Smith’s Anthology of American Folk Music and, finally, Greenwich Village in the 1960s. At each step along the way, the range of what got to be called folk narrowed to form a particular genre and market segment with a distinctly backwards-looking aesthetic.

Lonnie Holley makes music that is folk in the old sense—that is, broadly, of the people. His music is a mixture of personal expression and cultural and historical record-keeping. Holley isn’t overtly polemical, however. As one song title, “From the Other Side of the Pulpit,” suggests, he is more listener than preacher; one voice among the crowd, not a leader set above it.

The video for “Pulpit” shows Holley in the studio with Bradford Cox of Deerhunter and Cole Alexander of Black Lips. In describing recording the song, Holley says, “We found all types of sounds. We turned all kinds of things into instruments.” Indeed, in the video, Holley is shown beating on old metal and throwing hand weights into a wheelbarrow. He explains, “I was trying to show that there is so much more on the other side of the pulpit that we can use to help humanity.”

Holley, who was born in Birmingham, AL in 1950, first became known for his visual art, which he began exhibiting in the ‘80s. Around this time, he says, “I bought a Casio keyboard at a thrift store. I looked at it and believed that it was something I could play. My way.”

He continues, “A few years after I bought the keyboard, I saw a karaoke machine on sale at the Goodwill store. I always went to Goodwill with my grandmother. And there was this karaoke machine with a tape recorder on it. It was just what I wanted and needed.”

Holley began making cassettes for friends. Among those who heard the tapes was Matt Arnett, Holley’s friend and road manager. Arnett’s father, William Arnett, whom Holley calls “a big supporter of my art,” is the founder of the Souls Grown Deep Foundation, an organization “dedicated to documenting, researching, preserving, and exhibiting the work of self-taught African-American artists of the American South,” according to its website.

On a visit to Atlanta several years ago, Holley performed to a gathering of friends in Matt Arnett’s home. In attendance were Lance and April Ledbetter, who run the Dust to Digital label, which puts out collections of archival and field recordings from around the world. Lance liked what he heard and signed Holley up.

On his two Dust to Digital releases, Holley still uses a keyboard as his principal instrument but also takes full advantage of the range of sounds available to him in the studio. The instrumentation is all secondary to Holley’s voice—sometimes gruff and guttural, sometimes sweet and keening—and to what that voice is saying. “The lyrics tie it together,” says Black Lips’ Alexander, speaking to Flagpole by phone.

The lyrics can range from abstract to surreal. 2013’s Keeping a Record of It begins with “Six Space Shuttles and 144,000 Elephants.” The song, recorded in Gee’s Bend, AL, tells a story that in its eschatological arc recalls Neil Young’s “After the Gold Rush.” Holley sings of six space shuttles “as big as the Hindenburg and the Titanic all put together” that leave “for the expiration of the planet Earth” and then return, able to “heal the air and fix the water, too.”

It’s strange to think that a man who began by recording cassettes on a thrift store karaoke machine is making perhaps the most technologically advanced folk music you’re likely to encounter today, and it’s stranger still that he is doing so as one of the only active artists on his record label. Unlike much contemporary folk music, there are no markers of antiquity in Holley’s music—no jugs or washboards. Holley’s debut, Just Before Music, includes references to “American Idol” and Oprah Winfrey; one song, “The End of the Film Era,” discusses Hollywood’s switch from film to digital.

Paradoxically, the quotidian touches only contribute to the music’s timeless feel, making it, in Alexander’s words, “hyper-sophisticated without being pretentious.” On “Looking for All (All Rendered Truth),” Holley speaks of “an internal place that I call myself,” and it’s clear this is where the music comes from. As he explains, “I can only tell [people] of this place in me and hope that they can find that place in themselves.”