Protomartyr is Detroit’s Next Big Band (Whatever That Means) 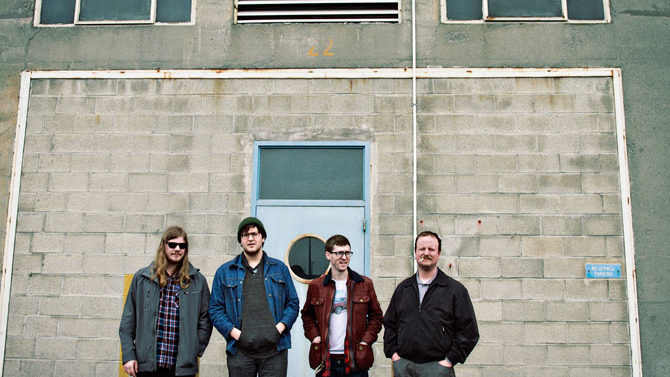 But frontman Joe Casey remains unconvinced. “Sadly, critical praise doesn’t pay the bills,” he says, adding that the members of the band, which adeptly blends post-punk austerity and garage-rock vigor, all still have day jobs.

Often heralded as a poster band for a city that’s fallen on tough times—following the past decade’s economic recession, Detroit’s population shrank to less than 700,000, nearly its lowest since the city’s automotive boom in the early 20th Century—Protomartyr’s music features certain traits outsiders might associate with Michigan’s fallen metropolis. The band’s blend of angular guitar lines, minimalist punk rhythms and Casey’s off-kilter lyrics and dry vocal delivery seem to suggest dimly lit streets and abandoned buildings like the freezing warehouse the band has used as a rehearsal space.

Yet Protomartyr has managed to carve out an identity all its own—one of vibrancy and complexity, and one that continues to evolve. As they make their trek south, the quartet will be debuting new material from studio album No. 3, which the band finished recording in February and hopes to release in the fall.

“We don’t necessarily want to bore people with a bunch of new stuff [live], but that might be the plan,” Casey says. “If I could guess, I’d say the shows will be two-thirds old stuff, with a solid chunk of new songs jammed in the middle to allow people to go to the bar or take a nice, leisurely bathroom break.”

Casey’s sense of humor often peeks through the corners of Under Color of Official Right. “What the Wall Said” centers around a person, well, having a conversation with a wall, while lyrics of disassociated despair and longing ring out over a steady two-note bassline: “Not feeling great/ Twenty percent,” Casey sing-speaks.

On the following track, “Tarpeian Rock,” Casey reads off a laundry list of entities that, with varying degrees of seriousness, Casey would like to send over a cliff: “greedy bastards,” “internet personas,” “adults dressed as children,” even “alt-weekly types.”

These lyrical absurdities contrast with Casey’s indifferent vocal intonation and subdued onstage persona. One might surmise the juxtaposition stems from his daily life in Detroit, where he works the door at a comedy club and resides in his childhood home, left empty after his father passed away and his mother, who suffers from Alzheimer’s, moved out to the suburbs.

In both personal and political ways, Protomartyr’s hometown informs its music. Under Color of Official Right was named after a legal term for a public official’s taking of assets; the theme is developed further on “Bad Advice,” a song addressed to former Detroit mayor Kwame Kilpatrick and other corrupt aides and bureaucrats.

While Casey’s lyrical themes, along with his penchant for dark humor and insistence that Protomartyr is a long way from “making it” paint a bleak picture of life as an independent musician in 2015, he says there have been signs of improvement. For instance, Casey admits, the band recently upgraded to a real-deal tour van.

The revelation comes with a deadpan afterword. “That’s got to be some measure of success, right?”