The Cassette Craze is in Full Swing, But Don’t Call it a Comeback 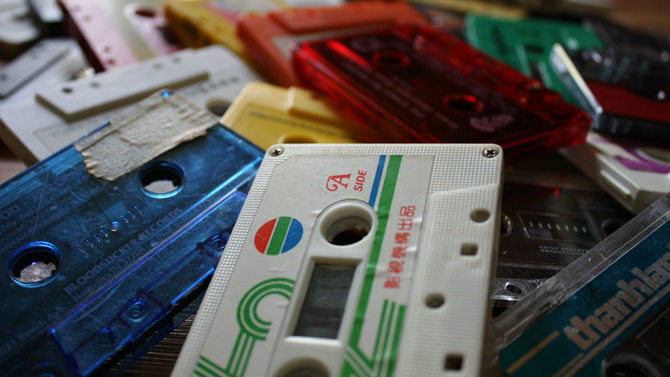 Long disregarded by the general public, thought to be an outdated medium for recording and listening to music, cassette tapes have gained a more watchful and interested audience in recent years. Influential independent labels like Captured Tracks, Drag City and Polyvinyl are now releasing their artists’ music on cassette alongside today’s other standards: digital download or stream, CD and vinyl. Joyful Noise Recordings even reissued Athens indie-pop outfit of Montreal’s discography on tape in 2011, limited to 500 hand-numbered copies, each in a screen-printed, custom-built wooden box.

More recently, the cassette has picked up often-surreal mainstream nods. Following its stellar performance at the box office and on the Billboard charts (a $330 million domestic gross, according to Box Office Mojo, and a No. 1 spot on the 200 chart), Disney subsidiary Hollywood Records announced that the Guardians of the Galaxy soundtrack would be released on tape. (The limited-edition release will be made available exclusively to independent retailers participating in Record Store Day through Dec. 31.)

In Athens, tape sales have been strong, no doubt a reflection of the musical community putting them out—a growing list of labels, including Southern Vision, Moeke and Cohosh, have released cassettes from bands like Pinecones, Nurture and Shade this year—and to the small but consistent consumer base frequenting Athens’ handful of record stores.

“Lots of locally released stuff is selling pretty consistently, and people from the Sidecar are picking up a lot of used cassettes of classic titles, as well,” says Wuxtry Records employee John Fernandes, whose own bands, Circulatory System and, soon, Old Smokey, boast cassette releases.

Rather than haphazardly attempt to place markers on a movement many are reluctant to say for sure is even occurring, it is more important to examine the process and benefit of putting music to tape, and how this highly involved labor reflects the ever-changing values of today’s music listener.

After all, it’s not like tapes disappeared. They’ve just been hiding out in thrift shops, gathering dust in parents’ garages and quietly occupying an ever-growing space in the local record store. 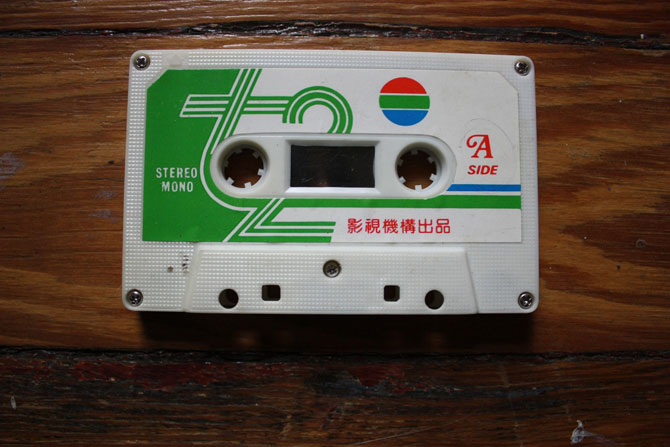 Cassettes have always had a home underground, among collectors and audiophiles with that DIY ethos that transcends the common cool, anchored instead in pragmatism, necessity and passion. Sonically, genres like noise, ambient, punk and acoustic music make the best fit for the medium, their thin, washed-out qualities affected little by reducing the sound to a roll of tape not 4 millimeters wide. (The Elephant 6 collective, with its fuzzed-out folk sounds, represents just one example of Athens’ rich tape-trading history.)

For many musicians a self-reliant spirit is enough to inspire tape creation. But there are also specific advantages to recording and releasing on cassette that go beyond cutting out the man.

For starters, they are inexpensive to make. Overlooking the costs of recording and mastering, which can be completed in any number of different ways, with any number of different budgets, an artist or band can produce 100 professional tapes for about $84, a number that includes the actual tapes, Norelco boxes, paper inserts (or “J-cards”) and labels, courtesy of National Audio Company.

Digital music is so easy to acquire. Tapes are an actual, exciting physical medium.

Compare that to $246 for a run of 100 CDs in jewel cases or $1,918 for 200 copies of vinyl from leading industry manufacturer Disc Makers (200 is the minimum order for vinyl), and it’s easy to see why bands on a budget might opt to put their faith in a four-inch piece of plastic.

Athens musician Patrick Brick has been putting out music on tape for a few years, most recently releasing Dog Dreams, the latest album from his confessional bedroom-pop project, Futo, on his own fledgling label, Teen Sleuth. Brick attests to the medium’s affordability and ease of production.

“It was more of just an availability type thing,” he says. “I could make my own CDs, but it just doesn’t look as good as a handmade cassette. I wanted physical merch without dealing with CDs. It was just the quickest, easiest DIY way to get my shit out there.”

Indeed, a well designed tape can differentiate a band from the pack at the merch table, but cassettes also allow a heightened level of personalization and an ability to connect artist to listener.

“If you’re just doing single little tapes, I think it’s much better, artist-to-consumer,” says Brick. “I used to write little notes in mine. You can’t write on a CD. CDs are the worst.”

On top of being economical and intimate, there is another obvious reason for the renewed interest in tapes among a younger generation: nostalgia.

In terms of music, fashion and other cultural signifiers, society has a knack for looking back to generations past and borrowing to create anew, a reclamation and reworking of trends, themselves likely inspired by other past innovators. Think of the post-punk revival of the early- and mid-aughts, heralded by Brooklyn’s vintage cool, or the influence of the ‘90s on today’s music and fashion.

“It’s kind of a fetishization thing—and I don’t mean that in a bad way, because I do the same thing. It’s just a cool physical medium,” says J.J. Posway, whose formerly Athens-based noise-pop trio, Scooterbabe, and ambient solo project, Aprotag, have released recordings on cassette via local labels Pizza Tomb and Posway’s own Slouch Tapes, respectively.

Posway’s sentiment rings true with many young people. Cassettes are a bridge of sorts between generations entrenched in physical media and millennials raised to stream and download, though the regard seems less for quality or creator and more for simplicity and availability. “Digital music is so easy to acquire,” Posway says. “Tapes are an actual, exciting physical medium.” 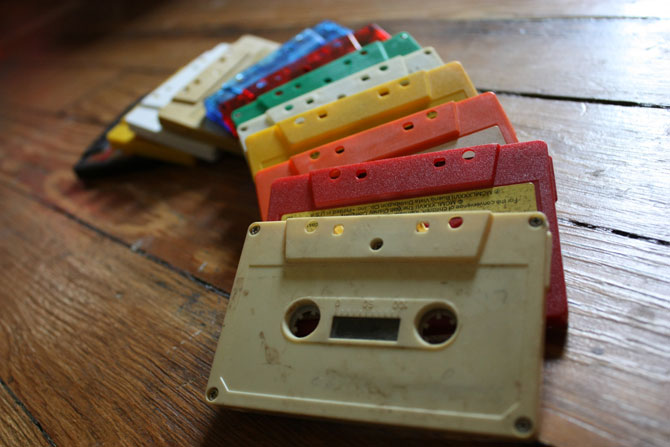 The question remains whether the cassette can transcend its niche status and, like vinyl several years ago, experience a full-blown revival. Tapes have an an undeniable appeal for many, but do its most fervent proponents have what it takes to compete for the attention of a consumer base so shifting in taste and preference?

“They may be putting up a stronger fight for shelf space than, say, 10 years ago,” he says, “but there’s always been a fervent cassette culture.”

Geographic North, spearheaded by Power (an occasional Flagpole contributor) and three friends, didn’t initially release its artists’ music on cassette, beginning instead with vinyl and turning to tapes later, when budgets only provided for small, quick runs.

They may be putting up a stronger fight for shelf space than 10 years ago, but there’s always been a fervent cassette culture.

“As a label, tapes allow us to take more chances and release stuff we’re super excited about—but don’t have as much money to spend on as a 7-inch or 12-inch release,” says Power, whose label boasts releases from A Sunny Day In Glasgow and Deerhunter offshoot Lotus Plaza.

Like many labels, Geographic North posts music from its releases online, hoping it will encourage curious listeners to buy the physical product. “If anything, we probably cater to the needs of a non-tape-buying audience,” Power says. “First and foremost, we just want this music we care about served up to the folks that would dig it, which is why we decided to put up each tape for free stream and download as soon as the tape is available.”

This attitude reflects the wide array of formatting available to consumers, with cassettes representing just a tiny percentage of the music market. Even if their resurgence can be qualified as a “revival,” it seems highly unlikely tape will once again become the preferred method of release on a larger scale.

So where, then, is the cassette’s place in today’s music economy, if digital streaming leads the race, vinyl has hit the mainstream and CDs occupy the nexus of “not very interesting” but “too convenient to forget”?

Locally, tapes may be selling well, but Captured Tracks owner Mike Sniper says the numbers are “very low” for his company, which boasts a roster of indie powerhouses like DIIV, Wild Nothing and Beach Fossils.

“On a bigger release, like Mac DeMarco, the cassette version will do about 3–4 percent of the sales, if even,” says Sniper.

In addition, there is a conspicuous practical barrier for many would-be buyers: Few people actually own the necessary equipment in 2014. “Listening has become relative to what is in our cars, our home stereo equipment, etc. Most newer vehicles don’t even have tape players,” says Gabrielle Bischoff, whose family owns and operates The Pope On Prince, a thrift store located above the Daily Groceries Co-Op.

Still, that’s slowly but surely changing, Bischoff says: “Our cassette players and tape recorders seem to disappear just as soon as they arrive.” In one particular instance, a woman arrived with an old Nakamichi tape player, assuming it was worthless and thinking the store was a Catholic donation center.

“The lady who brought it to us said it was her husband’s, and he used it for some sort of psychology dictation. She wasn’t disappointed when I offered her money for it,” Bischoff says. “I believe that it sold the following day.”