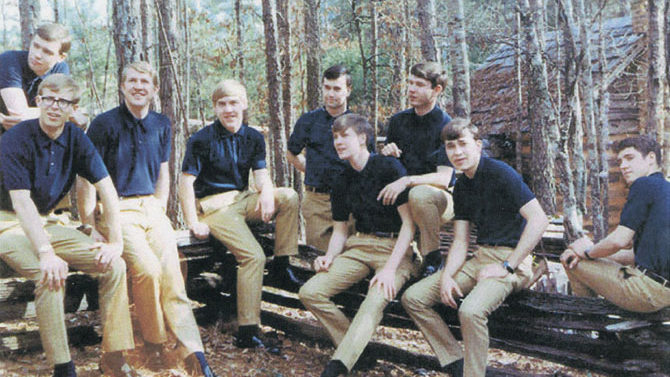 Since forming in Athens in 1964, The Jesters have been cranking out smooth-grooving dance beats and swingin’ soul tunes for party-minded crowds in and around Georgia. Over the last five decades, the band has survived various lineup changes and degrees of activity, but it has never stopped delivering its lush, classy mix of vintage soul, early-era rock and roll and shag-friendly R&B. Until now. The group will play its final show Friday, May 30 at the Georgia Theatre.

“We’ve really always been an R&B-slash-soul band,” says baritone sax player and co-founding member Donny Whitehead. “We have done some hardcore beach music here and there… but we were a soul band at heart. We were fortunate to be booked into some of the big shag clubs at Myrtle Beach and around the Carolinas in the late ’60s, but we had a five-piece horn section with a big sound.”

As high schoolers about to enter their college days, The Jesters first started gigging around northeast Georgia when there were hardly any proper music venues in Athens. Most of the band’s early shows took place in fraternity houses on campus or in rented halls and lounges, like the party spots at the old Georgian Hotel downtown, at Charlie Williams’ Pinecrest Lodge out at Whitehall or the Army-Navy Club on Timothy Road.

Imagining these performances now, it’s hard not to think of Otis Day and the Knights playing the basement party in the film Animal House.

“That’s totally the way it was,” laughs Whitehead. “In the late ’60s, it was really cool for big fraternities around the South to hire big show-bands from out of state, so we’d end up with shows at [University of South Carolina] and all around. We’d pass bands like The Swingin’ Medallions or The Embers on the highways when were all hauling our trailers to shows. It was a great time, but it was totally different from the way the Athens music scene is today.”

During their busiest times in the late ’60s and later on in the ‘80s, The Jesters developed and capitalized on their love for the big swagger rhythms of the Stax Records artists and high-energy Motown hits. Like many show bands on the circuit at the time, the group emphasized continuous rhythms and heavy dance beats, an approach it has maintained through the years.

“We developed dance steps and choreography for every set we played,” Whitehead says. “When we did a 45-minute set, the music never stopped. We’d go directly from one number into another, like a 45-minute medley. That kept the crows dancing. At the end of each night, we’d be wringin’ wet, not a dry thread on us.

“We had a great chemistry, and we all knew what was coming next, instinctively,” he adds. “Still today, someone might play a lick or give a visual cue and that [will] lead us into something new, right on the spot. It’s fun and exciting to have that on stage.”

Last fall, Athens accountant and longtime Jesters sax man Harold Williams suffered paralyzing injuries after a severe fall. He has battled kidney infections and other ailments during his recovery. Friends and musicians have organized various fundraisers for Williams in recent months.

Billed as “A Concert for Harold Williams,” The Jesters will welcome more than a dozen special guests to the stage during their farewell performance. (A catered reception and silent auction will precede the show early in the afternoon.)

Whitehead says that all of the proceeds from the show will benefit the effort to purchase a special-needs van for Williams and his family.

“Harold really wanted us to do this 50th anniversary gig,” Whitehead says. “We were going to call it at the last show, in September, but then he had his accident. Now, we’re honored to [play] a final show for him. It’s bittersweet. We’ll be better rehearsed and organized than usual, and we look forward to making it a positive and joyful experience for everyone.”

Though it has finally come to an end, Whitehead reflects on The Jesters’ history with awe. “It’s odd to think about how so many individuals with different personalities could get along and keep a band like this together, from high school through today. It’s pretty amazing.”