Conscious Craftsmen Blackalicious are Back with a Vengeance 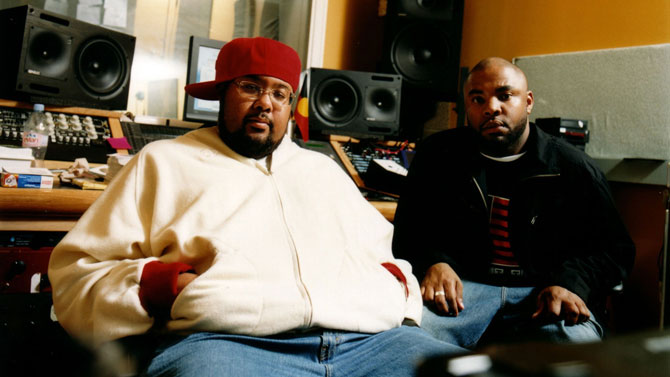 The smartest craftsmen don’t just use their tools—they learn from them. Veteran hip hop duo Blackalicious exemplifies this lifelong act of self-education. Chief Xcel isn’t just a beatmaker; he’s a vinyl obsessive whose diabolical crate-digging has allowed him to amass several storage spaces of wax in the group’s Bay Area headquarters. And rapper Gift of Gab has developed a vocabulary that, according to a recent infographic that hit the Internet only a few weeks ago, surpasses even that of William Shakespeare’s.

“Yeah, I got that email last week,” says Gab from his home on the West Coast. “If you’re an emcee, you’re a wordsmith. So I think it’s very important to have a wide vocabulary for your arsenal.

“I started rhyming when I was 12,” he continues. “As soon as I heard ‘Rapper’s Delight’ and Kurtis Blow’s ‘The Breaks,’ I was pretty much hooked.”

Gab met Xcel not too long after he’d penned his first verses—the two shared an economics class in high school. “It was a rival thing at first. He was from Northern California; I was from Southern California,” says Gab. “So, we used to argue over who was better—Ice-T or Too $hort.” An alliance was reached after the two were able to agree on their mutual appreciation of Audio Two’s “Top Billin.'”

In 1994, Blackalicious released the first in a series of EPs, the recently re-released Melodica. The group’s aesthetic was established early on: a potent juxtaposition of Gab’s commanding, loquacious lyricism with Xcel’s soul-flecked, Golden Age beats. The duo stood as a traditionalist bulwark in the Bay Area rap scene, which has produced strong but highly idiosyncratic artists ranging from Del the Funky Homosapien to Keak da Sneak. The group had hit a certain stride by the time it issued its now-classic second LP, 2002’s Blazing Arrow.

It was on Blazing Arrow that the members of Blackalicious reached an uncanny ability to match one another in terms of thematic content. On “First in Flight,” a defiantly uplifting beat is bolstered further by Gab’s seemingly unending verbal excursion through the idea of freedom. He doesn’t explore the meaning of the word “free”—he gets inside it.

Elsewhere on that same album, the group gives a real gift in “Make You Feel That Way,” which would be a perfect song in any genre. Writing about one’s troubles is easy; writing about the joy of life without slipping into goopy sentimentality is much harder.

These songs simultaneously sum up the duo’s commitment to the work and its refusal to be quicksanded in negativity. Today, Blackalicious is synonymous with the uplifting movement of so-called “conscious” rap. Which isn’t to say that Gab hasn’t consistently prioritized keeping his lyrical sword sharp.

“More than anything, it was a competitive thing,” says Gab, speaking of his salad days in hip hop. “I started out as a battle emcee. Not in the sense of today—back then, whoever had the freshest rhyme won. It wasn’t about insulting your competitor and all of that. It was just about who had the freshest rhyme.”

Gab is blessed with a distinctive voice, capable of warm empathy and ferocious dexterity, but he’s also a student of style.

Blackalicious followed up Blazing Arrow in 2005 with the aptly named The Craft. Following that, Gab and Xcel took some time to focus on solo material and to work with other members of their expansive Quannum crew, which includes Lateef the Truthspeaker and DJ Shadow.

Now, nine years later, the group is poised to finally release what Gab calls “some of my favorite work that we’ve ever done”—a new album, Emoni, a Swahili word meaning “faith.” The time spent apart in the studio allowed the pair to return with the renewed vigor it needed.

“It’s definitely one of the most focused records that we’ve ever done,” says Gab, his voice displaying palpable enthusiasm. “A lot of times, we’ll make a record and it’ll take a minute before everything can come together. But this time we just went in, and it was really focused. You’ve just gotta hear it, man. I’m really proud of it.”