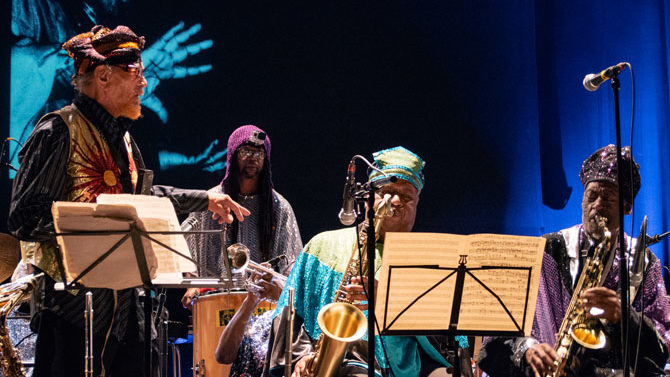 In 1952, a decade before the first Apollo missions and 25 years before our introduction to the Rebel Alliance, Herman “Sonny” Poole Blount legally changed his name to Le Sony’r Ra. The pianist, composer and arranger was born in Birmingham, AL in 1914 and was living in Chicago at the time. The name change followed an epiphany wherein Blount realized his actual birthplace was the planet of Saturn, and that he had been brought to Earth in order to help mankind through his music.

In order to accomplish this goal, the man known today as Sun Ra formed the Sun Ra Arkestra. Wearing their signature quasi-Egyptian space uniforms, this sci-fi big band embarked on one of the most consistent and committed musical journeys ever to begin on American soil, even if their roots originate beyond our planet’s atmosphere.

While Sun Ra faced accusations of gimmickry, his catalog of more than 100 albums (many of which were self-released) stands today as one of the most important discographies in jazz. His wholeheartedly-believed interplanetary narrative is a precursor to the Afrofuturism movement that birthed the careers of musicians (George Clinton), novelists (Octavia Butler) and beyond. Sun Ra left the planet in 1993 at the age of 79, but his group has followed in his stead, still working in the same Philadelphia house where their bandleader worked and lived with many of his musicians since the 1970s.

Today, the group is led by alto saxophonist Marshall Allen, who anchors the ensemble to their earliest years. Allen joined the Arkestra in 1958 and became the group’s leader in 1995. He is 91, sports a fiery orange beard and an equally incendiary instrumental scream. When not producing his signature peals of shrieking sax, he uses an EVI (electronic valve instrument) to create theremin-like arcs of tone. Fellow saxophonist Knoel Scott acts as a lieutenant to Maestro Allen, leading many of the group’s call-and-response chants.

Allen is one of several elder statesman of the Arkestra. Saxophonist Charles Davis joined the group in the late 1950s after playing in bands supporting Billie Holiday, Ben Webster and Dinah Washington. As a senior member of the group, Davis has apparently earned the right to skip out on donning the space regalia at his discretion. Other members of the group date their membership back to the 60s and 70s.

Injecting a respectful studiousness and youthful energy to the group, more recent members include drummer Wayne Anthony Smith Jr., vocalist and violinist Tara Middleton and party-starting trombonist Dave Davis. The younger Davis is perhaps the only active Arkestra member with a Twitter account, providing a window into the life of the Arkestra, which might mirror that of any number of Athens bands. A recent photograph from a practice session at the group’s Philadelphia headquarters is accompanied by the caption: “Why are drums and a bike in the kitchen?”

It’s easy to see how the Arkestra has retained an enduring roster. Its very existence has always been anomalous for a number of reasons, but today it stands away from the jazz mainstream as a total outlier: a working group that has real fun. A performance by the Arkestra is not a mild affair meant to elicit a museum-like respect for a dead craft; it’s a continuation of jazz’s origins as social music. Despite the group’s well-earned reputation for experimental excursions, each performance is an honest-to-god party, for those onstage as well as the audience.

While the group has acted as a magnet for talented and adventurous performers, Sun Ra’s musical vision also emphasized omnivorous inclusion across the spectrum of black sounds, absorbing funk, R&B, free improvisation, gospel and African music into the group’s origins in straight-ahead swing. Because of the group’s decades-old history as an active ensemble, they can perform freaked-out ‘70s psychedelic funk and Ellingtonian big band arrangements with equal authenticity.

Over the last few decades, university music programs, critics and other institutional forces have historicized and professionalized jazz. On the scholastic front, this has engendered petty arguments over what can and cannot be considered jazz. In practice, it’s resulted in technically virtuosic but aesthetically conservative albums and performances that are meant to be consumed by the artists’ peers—other jazz musicians. Overall, it’s earned jazz a place alongside abstract art or Joycean prose, something that someone has to try to “get.”

The Sun Ra Arkestra has nothing to do with either of these pursuits. Like another legendary bandleader and composer, Charles Mingus, the Arkestra represents the chaotic truth of the music. Their wild, noisy presentation feels like a more genuine representation of what big bands might have been like when jazz was truly popular music, before it became “America’s classical music.” In addition to “[traveling] the space-ways,” the Arkestra spans time with equal effortlessness, tethering the 20th and 21st centuries together through sheer experience. Their music illustrates the sublime cohesion that can be achieved through dogged unity, urged on in spirit by their leader in absentia.

The highly anticipated Athens performance is being presented by Ideas for Creative Exploration (ICE), an interdisciplinary initiative for advanced research in the arts at the University of Georgia, led by Mark Callahan. In collaboration with cellist and composer Heather McIntosh, Callahan has previously worked to organize the AUX Festival, an experimental music event that echoes the Arkestra’s populist vision for the performing arts.

Opening the show will be the Flicker Orchestra, a cross-section of Athens musicians with a rich history of performing alongside silent films. The group’s overlap with the Elephant 6 Recording Company should come as no surprise, as Athens’ longtime homegrown psychedelic collective is highly inspired by the work of the former Herman Blount and his musical followers.