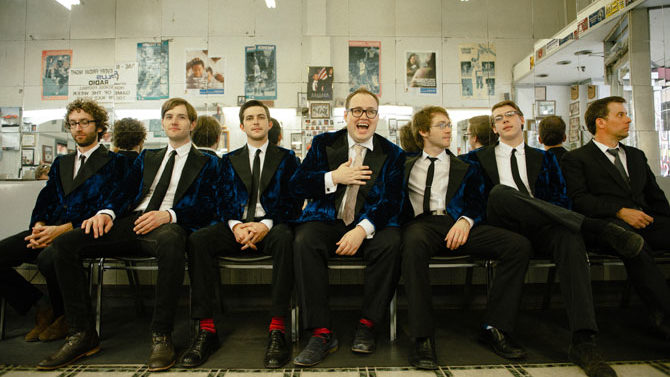 “I got really fascinated with Mark Rothko and his paintings,” the group’s singer, Paul Janeway, begins by way of explanation. A product of Chelsea, AL, Janeway grew up with designs on being a pastor. But as a member of the Broken Bones, he became the saint in question, as well as the group’s frontman and reason for being.

“I didn’t grow up knowing much about art or seeing much art in person, so I got obsessed with it later in life,” he continues. “Rothko is my favorite, for some reason. I think it has to do with the fact that his paintings look so simple in a book but in person they are almost a religious experience.”

While Janeway’s voice works dutifully in a Southern tradition, there’s a hugeness, not to mention a spirituality, inherent there, too. Comfort goes a long way in times such as these, and the Broken Bones’ music serves that purpose. Like a warm, well-worn coat or a trusty rust-bucket sedan that won’t die, the Birmingham, AL-based soul outfit is imbued with a feeling that cannot be provided by something brand new.

Janeway could potentially be confused at a distance for actor Jonah Hill, but when he opens his mouth to sing, the only names one might mention are Otis Redding, Wilson Pickett or Sam Cooke. Janeway’s backing band, a group of reasonable-looking young men with a small horn section in tow, play music that is nothing if not suited to his voice. This is straight-up traditional soul music—much of it heart-wrenching balladry, but a lot of dance, too. Gospel’s influence plays heavily into the delivery, though the groove keeps things nice and secular.

Through his teen years, the drive to bear witness gave the frontman his passionate bent, but while he always sang in his family’s Pentacostal-leaning church, he never attempted to sing solo.

“It wasn’t actually until I was about 19,” he says, that he tried to step up. “I decided I was going to do an open-mic night at a bar in Birmingham. I wasn’t a very good guitar player at the time, but I went on stage with some songs I wrote on guitar and sang them. The reaction was pretty good. People said nothing about my guitar playing, but said I had a pretty good voice.”

Once Janeway assembled his band, the Broken Bones quickly came to the attention of Ben Tanner of Alabama Shakes, the wildly popular rock ‘n’ soul outfit. Tanner did the Broken Bones right, bringing Janeway and company to Muscle Shoals, AL to document their music properly. The production on the band’s debut album, Half the City, is one of the few hints that we’re hearing a new group: Unlike the retro-soul cottage industry of the DapTone label (Sharon Jones, Charles Bradley, etc.), Half the City makes no attempts to mask its 2014 release date.

“We recorded the album at the Nuthouse in the Shoals,” says Janeway. “We mixed the record at FAME, which was still an incredible experience.” The latter studio (Florence Alabama Music Enterprises) has been a Southern music institution since 1959 and has hosted a for-real who’s-who of R&B royalty, including Aretha Franklin, Otis Redding and Joe Tex.

“The place is just so rich with history,” Janeway says. “I was told they haven’t changed much from when they first built it, because they are afraid it might lose some of the magic. It was like going back in time. [It was] just cool seeing all the pictures on the wall of folks who recorded there.”

As for the pantheon in which the Broken Bones are working, where one might feel intimidated walking the same path as so many giants, Janeway instead feels inspired. “I think we are just making music we love making,” he says. “From a personal standpoint, there is a motivation… to be just as good as they were. Obviously, I don’t know if that is even possible, but that is what keeps me going as a singer.”