The Shondes on Fighting the Good Fight 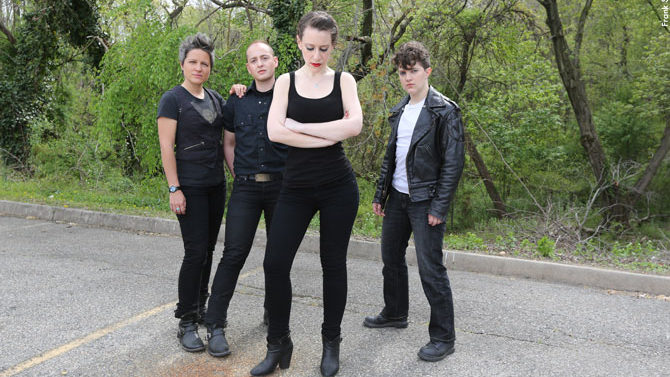 “Bruce Springsteen’s for the working man,” comedian Colin Quinn once riffed. “If you were really for the working man, would you do a four-and-a-half-hour concert on a Tuesday night?” That is, if the Boss is willing to profit from his Everyman image, shouldn’t he be responsible to his audience? The “Springsteen feeling” is undeniable in its Americanness—the halfway point between lonesome and hopeful, weary and indefatigable, Elvis Presley and Aaron Copland. But if Springsteen’s music represents an ideal, do his fans have equal access? (Let’s not even discuss ticket prices.)

Brooklyn-based indie-punks The Shondes represent a real and personalized response to the call for a kind of music that speaks to the diversity of America well into the 21st Century. Formed by bassist and vocalist Louisa Solomon and violinist Elijah Oberman in 2006, the group immediately established itself as a radicalized personal entity. (Members first met original drummer Temim Fruchter through activism in opposition to the Republican National Convention in 2004.)

The band’s music is solidly catchy, driving rock and roll, which acts as a vessel for Solomon’s personal-as-political missives. That the lyrics veer towards hopeful positivity is of significance when considering The Shondes’ political alignment with the LGBT community; the inclusion of tremulous violin leads is a nod to their connection to Jewish culture. (In Yiddish, a “shonde” is translated as “a shame,” a sly nod to the group’s connections to both Semitic and queer communities.)

This winter sees the group touring with Against Me!, a band that morphed from a paragon of D.I.Y. intimacy to a major-label powerhouse over the past decade. That band’s vocalist, Laura Jane Grace (formerly Tom Gabel), came out as transgender in 2012; even within the typically open-minded punk community, there was some deplorable commentary from the cowardly Internet sinkhole.

“There’s no doubt that we still live in a culture that’s deeply racist, sexist, homophobic and certainly transphobic,” says Solomon, speaking to Flagpole from Buffalo, NY, the tour already in progress. “And there’s a special kind of vitriol that people sometimes have for trans women. [But] in my observation, audiences on this tour are so excited to support Laura. The audience seems, to me, to be quite mixed—there are fans that have been following [Against Me!] for a decade, and then maybe some new fans.

“I’ve noticed queer people or trans people in the audience, as well as people who appear to me to be their longtime fans,” Solomon continues. “And everybody’s just chanting: ‘Laura Jane Grace, Laura Jane Grace, Laura Jane Grace.’ It makes me almost moved to tears—the support seems to be so palpable in these audiences. [There are] transphobic losers on the Internet who are going to say whatever they say, but so far at the shows, it’s a real culture of support.”

Following the September 2013 release of their fourth full-length, The Garden, The Shondes are continuing to tour their asses off, even breaking a longstanding agreement to not travel during winter in order to join Against Me! on the road. And while Solomon concurs that the cultural climate of LGBT acceptance at large has changed radically in the past five years, within the circuit the band came up through, the change hasn’t been so significant.

“We’ve never really had any problems with the way we’ve been treated by fans or by venues,” she says. “I’ve toured all over the country, and a lot of times New Yorkers will be skeptical about how we’ll be received. I’ve found that even where there’s a less-liberal surface culture, within the music scene you will always find people who are progressive and interested in supporting your work and having conversations about political issues… People often ask us if we’re scared to play in Birmingham or whatever, and I always sort of laugh at them: ‘Have you ever actually traveled to these places?’ There are people trying to change the world everywhere. There are people who are committed to justice everywhere, and interested in art everywhere. It might look a little different, but it’s there.”

In spite of some recent lineup changes, Solomon and Oberman voice a determination to continue to commit to The Shondes in a full-time effort to connect with those people. “Eli and I—we drive the band,” Solomon says. “I’m the bandleader, and he’s kind of my Clarence Clemons. But playing violin.”