High Hat Alumni Reunite for a Cause 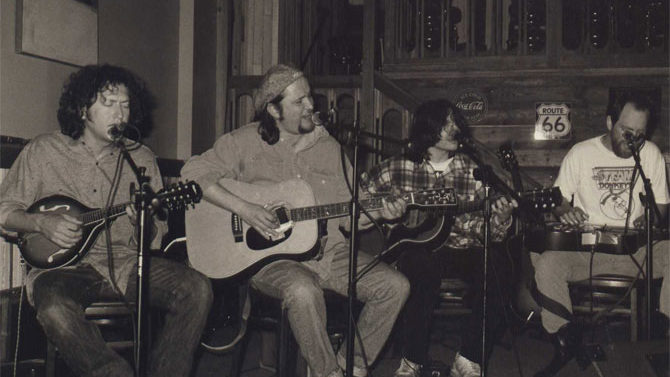 It’s not unusual to see groups of Athens musicians collaborate on benefit shows for their colleagues, but it’s rare when the gigs they organize morph into musical family reunions. Organized by Athens musician William Tonks, “High Hat Revisited” will bring some of the Classic City’s most prominent and acclaimed music scene statesmen back together in the name of goodwill. Designed as a fundraiser for longtime Athens singer and guitarist Barry Sell and his wife Carolyn Vaughan Sell, who was recently diagnosed with an aggressive form of multiple sclerosis, the roster for Thursday’s show includes several acts who performed regularly through the late 1990s at the old High Hat Music Club, a bustling hotspot located at 321 E. Clayton St., where The Bury is now.

Tonks and Sell have a long history in Athens, as bandmates and colleagues. As many Athens musicians remember, Sell was one of the busiest guitarists in the local scene in the late 1980s and ’90s. Switching between mandolin, electric bass and acoustic and electric guitars, he could handle anything from old-school mountain music to cranked-up garage-rock and honky-tonk.

An original member of long-running local rock band Bloodkin, Sell and drummer Aaron Phillips stepped aside in 1987 to form a rowdy duo called the Skinpops. (Sell went on to play in numerous Athens groups, including the first version of the Drive-By Truckers.)

Meanwhile, Tonks’ lengthy musical career in began with a quirky Athens groove-rock band called the Gravity Creeps. He taught himself the dobro in the late ’80s and started veering toward more country and blues with such projects as the Sunspots, Barbara Cue and Redneck GReece Deluxe and the Hot Burritos—two projects that also featured Sell.

The High Hat was an integral part of all this music, and its presence lingers in the minds of the musicians who were there. Drive-By Truckers frontman Patterson Hood, a High Hat alumnus who remembers Sell as “a very talented musician… a natural,” was working at Gautreau’s restaurant in Watkinsville when he first connected with the High Hat’s owners during his first opening gigs at the club. He soon landed a regular job as one of the club’s main sound engineers.

“I remember that I called [co-owner] Drew [Alston] as a follow-up about trying to book another show,” Hood says. “I know now what bad timing that [was], but didn’t then. He didn’t have time to talk, as the sound man was sick, and he was trying to soundcheck a band. I lied and told him I was a sound man and offered to come in and help out.”

Co-owner Tony Eubanks was impressed with Hood’s mix and technique, and he invited him to work the weekly Tuesday night shows with the Hot Burritos. Hood continued to work sound at the High Hat for the next three and a half years. Oftentimes, when a band or solo act cancelled at the last minute, Hood would take the stage to fill in with a set of new originals.

The High Hat first established itself as a loungy, mid-sized watering hole featuring wooden decor throughout its long, narrow main room. An L-shaped bar stood to one side, and a triangular stage was angled along a back staircase to a cozy balcony. The old “Tyrone’s O.C.” sign (from the classic music venue at Foundry and Broad streets) hung over the stage.

For a short time, the room served as home base for the blues. Northeast Georgia singer Neal Pattman, local electric combo the Healers and skillful Atlanta guitar man Tinsley Ellis all performed regularly. But despite support from local blues fans, turnout for shows was usually slim. Shortly after Eubanks signed on as co-owner (replacing Galen Cordura in 1995), the High Hat changed its name to the High Hat Music Club and diversified its bookings to include local Americana, punk, pop and garage bands and songwriters. By mid-’95, the club had become one of the top spots for underground and original music in Athens.

“It was a busy place, and there was about a three-year run where it was pretty much the center of my universe,” Tonks says.

“Before the High Hat, there wasn’t really anywhere for that Americana genre to play in town,” Hood recalls. “Nowhere for acoustic acts, either, so it filled a much-needed gap and provided a place for bands like the Continentals, the Possibilities, Gregory Dean and the Bubbamatics and others. It was a perfect place for my solo shows and the earliest Drive-By Truckers shows.”

The “Tuesdays with Tony” series allowed Tonks and Sell to welcome an eclectic rotation of songwriters and bandleaders, including Jack Logan, Kelly Hogan, Greg Reece, Anne Richmond Boston, Todd McBride and Vic Chesnutt, among many others.

“We used to do an opening set by ourselves, and then we’d be the backing band for a cavalcade of local stars,” Sell says. “I believe one of the very first show was with Jack Logan as our guest in February of 1995. That night totally sold out, with more than 200 people in the room.”

The vibe was undeniable. “I felt like we had this great, tremendous run for more than a year and a half on those ‘Tuesdays with Tony’ shows,” Sell adds. “I saw so many kinds of bands—and configurations of bands—at the High Hat. The club didn’t quite have the big sound system it needed for a super-loud, rockin’ band, so some of the best-sounding shows I remember were by the more stripped-down acts.”

But the club welcomed its share of stars, too. “One of my favorite Athens gigs ever was in 1995,” Sell says, “when a bunch of musicians came together for an Athens Humane Society Benefit, including R.E.M. bassist Mike Mills. We all paid tribute to the music of Big Star and Alex Chilton, and former Big Star drummer Jody Stephens even sat in on some songs.”

For the Sells, who now live in Austin, TX, the past year has been tough.

“Austin is a great music town, and it’s a great town for other things, too,” Sell says. “It’s been great for me and Carolyn to be out here. But it’s been a rough ride this year, especially for Carolyn… We’re swimming in medical bills. It’s overwhelming on all levels. Her type of multiple sclerosis, primary-progressive MS, is the really bad kind that just keeps going and going.”

Tonks knew he wanted to help—and the High Hat connection was an obvious starting point. “Barry called me in June, and he’d already done a Kickstarter campaign to fund some experimental treatment for Carolyn, but [the treatment] didn’t work too well,” he says. “Now, they’re at wit’s end. I knew a benefit show would help. I brainstormed and thought of the classic High Hat bands. Tony Eubanks had recently compiled a bunch of live recordings of local bands playing at the club, so that inspired me.”

“High Hat Revisited” will feature plenty of High Hat staples: Five Eight and Jack Logan, Bloodkin, Greg Reece (a.k.a. Redneck GReece) and members of the soulful, twangy Workhorses of the Entertainment/Recreational Industry (featuring Ben Reynolds of the Chickasaw Mudd Puppies).  There will reportedly be several special guests, too.

Tonks is particularly excited by how easily the lineup came together. “Jack Logan signed on, and he requested that Five Eight back him up, which is a slam dunk,” he says. “The Workhorses of the Entertainment/Recreational Industry never actually played at the High Hat, but Ben and I started the idea of the band there after the Hot Burritos fell apart.”

Tonks also raves about the venue that will host the tribute concert. “Hendershot’s is ideal, because it’s the closest vibe to the High Hat that I’ve seen since the actual High Hat,” he says. “It’s a long, skinny room. The bar is at an angle kind of like the stage at the High Hat used to be angled. Barry can’t make it to show himself, but he will definitely be there in spirit.”

Both Tonks and Sell say they feel fortunate to have experienced and participated in the camaraderie between High Hat bands back in the day. That spirit of mutual support is at the heart of this week’s event.

“From what I can tell, Barry has done about as well as a man can do,” Tonks says. “Life slapped him down, and he’s trying to stand up. But, really, this is not about Barry. It’s about his wife, who’s sweet as pie. The funds we raise will be sent directly to Carolyn’s family, who are underwriting the extra medical bills.”

For his part, Sell sends his gratitude.

“This whole thing is fantastic,” Sell says. “We really needed it, and we really appreciate it. It’s lifted Carolyn’s spirits. I hope they sell the damn thing out and have a great rock show.”