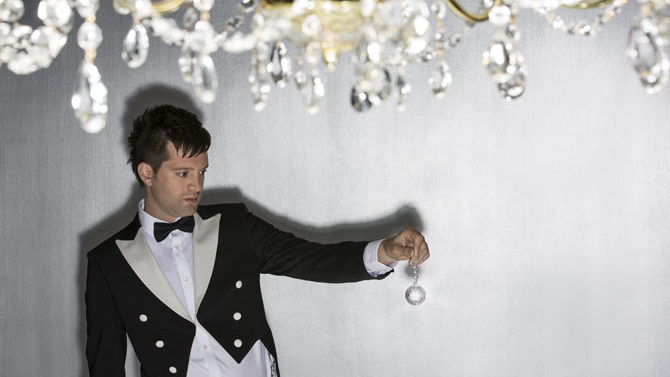 The club DJ embodies an odd combination of dorkiness and cool. Unsexily sifting through stacks of records by day, at night he emerges as the leader of the party. Ann Arbor, MI native Mayer Hawthorne worked as a DJ for years before embarking on a career as a singer in his own right. Over the course of three records, Hawthorne has crafted a persona that retains that earlier contradiction, equal parts nerdy and slick. But where his earlier efforts seemed to shuttle between the two poles, the singer seems determined to aim for cohesion on his latest, Where Does This Door Go.

The new record was a departure for Hawthorne in many ways. He ceded his usual micro-managerial production duties to a group that includes Pharrell Williams, Greg Wells and Oak. This is Hawthorne’s major label debut, and it seems possible that the label had a hand in bringing those big names into the studio. Whatever the case, Hawthorne saw it as a welcome opportunity.

“It was just time to do something new,” he says. “It felt like these guys would push me outside of my comfort zone.”

The production team focused Hawthorne’s sound, shading away from Motown and more towards Steely Dan-flavored jazz-rock, a transition that didn’t always go smoothly. “It was tough—it was really tough—there were a lot of heated arguments in the studio,” Hawthorne says. Still, the challenges were worth it. Not tied up at the mixing board, Hawthorne was free to focus more on songwriting. “Sometimes you get so wrapped up in getting the best snare sound in the world and you forget about the song,” he says.

Hawthorne’s ability to turn out a well-crafted pop-song is evidenced throughout Where Does This Door Go, but the production crew was helpful in that regard, as well.

“Pharrell and I are both really big Steely Dan fans… and one of the things that Pharrell really pushed me to do was just to tell the story in the most vivid detail possible,” Hawthorne says. “That’s part of what makes [Steely Dan’s] Donald Fagen so great, I think—he really just focuses on the details.”

The Steely Dan influence is apparent from the first notes of opener “Back Seat Lover,” its smooth synth chords dopplering between the left and right stereo channels. Elsewhere on the record, Hawthorne seems to have taken Pharrell’s advice in terms of lyrics. The album features Fagen-esque lines like, “Her boots are made from souls of stronger nights,” from “The Innocent”; or the opening lines of “Corsican Rosé,” pegged to the detail in the title: “Ooh girl, don’t lie/ I know that Corsican Rosé stays on your mind.”

Hawthorne made sure to distance himself from his signal influence in one key respect. “Steely Dan is very calculated, very nerdy music,” he says. “It’s not really very sexy music. We kinda took that Steely Dan formula but, you know, ‘Make it Mayer Hawthorne, make it sexy.’”

There’s no mistaking the differences in approach. While Fagen and co. had a penchant for lyrical subterfuge, sneaking trenchant commentary into otherwise smooth-sounding music, Hawthorne’s words stick closer to the surface. This quality fits his persona, most apparent in the skits on the record, which cast him in the role of goofy yet magnetic playboy.

Indeed, beneath it all, Hawthorne is yet another iteration of an increasingly common type: the genial white soul singer. The singer in question embodies a specific kind of cool, the most essential component of which is modesty, if not downright self-mockery. (Think of Justin Timberlake showing his sense of humor with “Dick in a Box.”) The pose seems an attempt to preempt criticism, especially as more and more white singers cross over into hip hop and soul territory that, typically, has been the realm of black artists.

Not that Hawthorne sees it that way. “I don’t ever feel self-conscious about it,” he says. “I mean, I love it too much.” For Hawthorne, what he is doing hinges, on one hand, on an attitude of respect for the music, and a commitment to keeping things light on the other. “I take the music very seriously. I definitely don’t take myself so seriously as a person that I can’t have fun with it. Fun is number one, you know?”

Where Does This Door Go has plenty of fun to offer. The album cover depicts Hawthorne in a burgundy turtleneck with an owl perched on his shoulder, looking like a yacht-rock Mister Rogers.  There’s a jovial atmosphere throughout, an atmosphere that Hawthorne strives to recreate in concert.

“We take it very seriously,” he says. “The goal is to make sure that nobody ever wants their money back when they come to see Mayer Hawthorne.”