The Authoritative Groove of The New Orleans Suspects 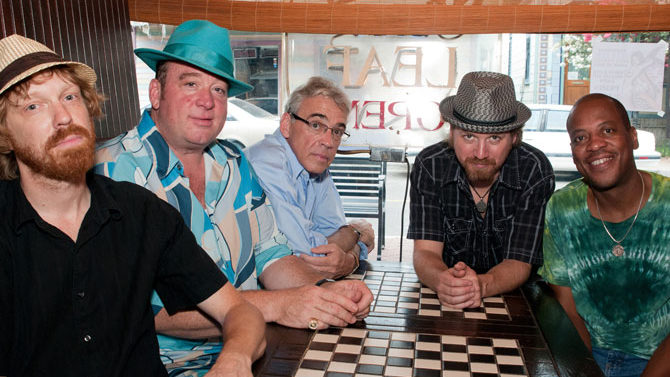 The New Orleans Suspects have the distinction of being one of the latest Crescent City funk acts on the American jam band circuit, and the band boasts a genuine all-star roster. Comprised of veterans from legendary New Orleans groups like the Radiators, Dirty Dozen Brass Band and the Neville Brothers, the Suspects groove with genuine authority and authenticity.

“We all have a bunch of different influences, and we value that, because that’s where we come from, but we’re not trying to slavishly recreate anything,” says bassist Reggie Scanlan. “Everybody’s got their own style of playing, so it’s one of those things where we’re just trying to get all the gear going together. It eventually becomes an individual sound.”

Scanlan, who performed with James Booker and Professor Longhair before going on a 33-year run with the R&B and blues-tinged Radiators from the late 1970s through the 2000s, helped form the New Orleans Suspects in 2011 after a series of jam sessions at the legendary Maple Leaf club in New Orleans’ Uptown neighborhood. The band’s initial roster featured drummer “Mean” Willie Green, of the Neville Brothers, pianist C.R. Gruver of Outformation, and guitarist Jake Eckert and sax player Kevin Harris, both of the Dirty Dozen Brass Band. Saxophonist Jeff Watkins (who played with both James Brown and Joss Stone’s bands) replaced Harris last summer, solidifying the lineup as it now exists.

“We were all basically veteran sidemen,” Scanlan laughs. “We’ve backed up some big-time acts and musicians over the years, but none of us are accustomed to VIP star treatment.”

During their first year on the road and in the studio, the Suspects’ ever-evolving setlist became a healthy mix of old school blues, funk standards and obscurities, as well as a slew of soul-based originals with plenty of authentic New Orleans flavor.

“New Orleans music carries a cachet with it wherever you go,” Scanlan says. “People love it. It’s fun, upbeat and unique. You don’t find it in every place in the country. The music really travels well, you know? We find a lot of audiences just dive into it.”

They could render classic New Orleans tunes like Earl King’s “Big Chief” or Professor Longhair’s “Tipitina.” They could jam on deep cuts by Little Feat, Taj Mahal, Dr. John or other curiosities from their record collections. Everyone in the band knows the same music and speaks the same musical language.

“We might do a Radiators song, but because of the way Willie plays drums or the way Jake plays guitar, it doesn’t sound the way it did when the Radiators did it,” Scanlan says. “It has a whole new treatment to it. The same goes for a Neville Brothers [song] or something like that.

“We play together so much these days, on the road and in the studio, that we’re constantly fine-tuning things and getting tighter,” he adds. “We’ve all had to learn new tricks and techniques with the new material. For example, I’ve had to learn how to play bass within a brass-band type of song. We’re all constantly challenging ourselves. With all of the components together, it’s a really natural fit with great chemistry.”

The band recorded and released a self-titled, nine-song debut in the summer of 2012. It followed later in the year with a live album titled Caught Live at the Maple Leaf. Scanlan and his bandmates are currently in the middle of sessions for their second studio album—a collection comprised entirely of new originals.

“We always cut the bass, drums and guitars live in a room, so we can maintain a live feel on the recordings,” Scanlan says. “We’re all there at one time, so it makes the music more cohesive. You know, one thing I learned from the late [producer] Jim Dickinson in the studio was to simply go for the feel. That’s how we try to approach it. Everybody is considered a songwriter, and every idea gets looked at and listened to. We’re all free to bring in material and critique material—and we critique each other like crazy.”

Fans and critics have been wildly enthusiastic about the group’s bona fide funk. And for such a well-seasoned veteran, Scanlan, too, sounds genuinely giddy about the groovy blues, rock and soul music he and his new bandmates are composing and reworking these days.

“These guys in the Suspects are the most killer, positive musicians, and I can’t say enough good stuff about them,” Scanlan says. “They totally challenge me every time, and I’m thrilled for that. For me, it’s been a reinvigorating experience. The time and circumstances meshed so well when we first got together, and I was particularly excited to do new things with a new band.”