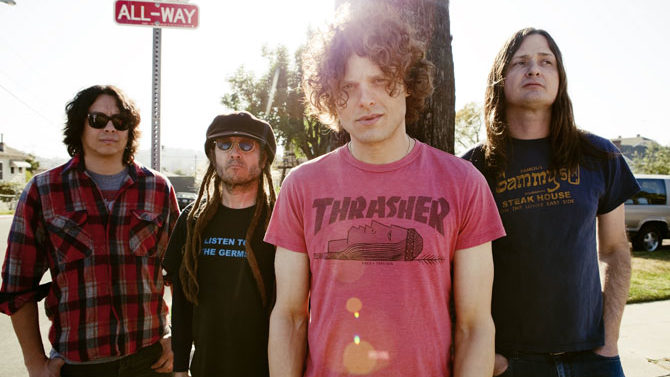 Genres are rarely granted their monikers by the original practitioners. Like most good artists, the most innovative of any given lot usually steal from their favorite forebears and, by virtue of being just fucked up enough to do it terrifically wrong, create something unique and previously un-thought of.

Then, itâ€™s the job of the eggheadsâ€”the ones with the OCD compulsion towards taxonomyâ€”to issue the labels, usually to the embarrassment of those involved. To name one particularly egregious example, this process is how we got the term “grunge.”

Keith Morris is one such innovator who rejects the imposition. â€œWe didnâ€™t come up in a punk rock scenario. We were just the disgruntled youth of America, and we were tired of a lot of the situations that were happening around us,â€ Morris says, speaking to Flagpole from his home in Los Angeles.

With bandmates Steven McDonald, Dimitri Coats and Mario Rubalcaba, Morris formed OFF! in 2009. Many years prior, Morris and McDonald had been confederates in the notorious and epoch-defining Southern California hardcore punk scene of the late 1970s and early 1980sâ€”as members of Black Flag and Redd Kross, respectively.

Morris left Black Flag soon after helping to kick the door down for hardcore music in America. He went on to form the Circle Jerks, a similarly influential band. When asked what it was like to come up in the punk rock scene through the decades, Morris bristles.

â€œWeâ€™re not necessarily punk rock. I know Steven certainly isnâ€™tâ€¦ Iâ€™ve been accused of being punk rock and hardcore and have had that label placed on me. But when [Black Flag] first started playing, we didnâ€™t know where we were going. We didnâ€™t know what was happening. Our thing was just, there was no map. There were no directions to get from point A to point B. There was no punk rock rulebook that stated, â€˜Youâ€™ve got to look like this. Youâ€™ve got to act like this. This is the music youâ€™ve got to listen to. You canâ€™t be a part of this; you canâ€™t be a part of that.â€™

While Morris is more than entitled to be freed from the yoke of confining genre tags, OFF! is a project that begs numerous comparisons to Black Flag, one of Americaâ€™s first hardcore bands. Right off the bat, the bandâ€™s name is, like Black Flag, swiped from a brand of pesticide. The group’s stark, attractive album artwork is provided by Raymond Pettibon, the comic-noir ink illustrator who also created the visual element for innumerable Black Flag releases and flyers (as well as the extremely recognizable cover of Sonic Youthâ€™s Goo).

The music itself, too, harks back to the so-called â€œfirst four yearsâ€ of Black Flagâ€”the riotous period where Morris was the bandâ€™s microphone controller. While guitarist Greg Ginn and company later moved into increasingly grim and intense territories with other vocalists (most notably Henry Rollins), Morris-era Black Flag was frustrated, kick-ass and fun. With OFF!, Morris again leads a band that traffics in blasts of pure energy, with few songs reaching the two-minute mark.

But there are, indeed, a few elements that pull the band out of the nostalgic morass. For starters, Morrisâ€™ assembled band is the cream of modern Los Angeles: guitarist Coats is a wild but controlled axeman, bassist McDonald is unerringly aggressive, and one would be hard pressed to find a more with-it drummer on the West Coast than Rubalcaba, who has bashed it out with Hot Snakes, Rocket from the Crypt, Earthless and others.

While some reports indicate that OFF! was born after a failed Circle Jerks writing session, Morris maintains that his other band is not over yet. Still, for the moment, heâ€™s focused on OFF!.

â€œMy mentality is, just go with it. See what happens. Let this go wherever itâ€™s gonna go. Weâ€™re a new band, [and] people have certain expectations. Thatâ€™s all fine and wonderful. But weâ€™re having fun, and we just do what we do and enjoy what weâ€™re doing. Iâ€™ve never been this excited to be in a band, andâ€”maybe this is a little egotisticalâ€”but Iâ€™ve been in a couple of really cool bands.â€