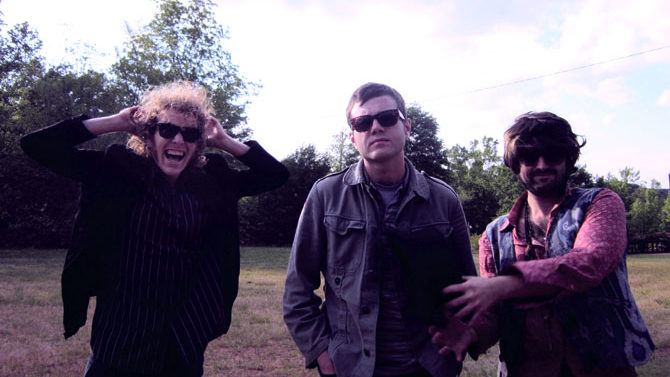 Zeke Sayer is no shady character. He might look like a spiral-eyed madman on a rampage, projecting bleary lasciviousness, but he’s really just a friendly musician with both feet in the blur of the weirdo side of Athens’ band scene. As the lead singer, guitarist and main songwriter in the trashy-but-snappy rock band The Humms, Sayer’s also one of the town’s more distinctive garage-punk champs.

Sayer’s journey with The Humms has been a stop-and-start affair, though. Two years ago, he and his bandmates—drummer ZZ Ryder, bassist Dave Martin and guitarist/organist Matt Garrison—were stompin’ around town armed with a raunchy, self-produced, 18-song collection of reverby rockers, anthems and punkish ditties titled Lemonland. They’d released it on their own label, Gypsy Farm Records, and the townies went wild for it. Flagpole scribe David Fitzgerald called the band’s debut “a mixed Halloween bag, full of a few tricks, a lot of treats, and not one lemon in the bunch.” Others in the indie music press also made a fuss over the band’s creepiest elements: the songs involving zombies, devils, vampires and haunted houses. The ghoulish themes in the lyrics played a major role in the theatrics of their live shows as well.

“A few years ago, we were playing at the Rye Bar, and we were painted up like a bunch of white-faced spooks in dirty black suits,” Sayer remembers. “We arrived out front that night in our black van, an ex-funeral home van I might add. That started all of that, I suppose.”

Their Cramps-esque B-horror flick shtick was noticeable, but there was another side to the band’s music and personality, a side rooted more in vintage psychedelic lo-fi pop (à la The Troggs) and Gothic blues-rock (think Flat Duo Jets) than in greasy ghoulabilly.

“Lemonland is jaggedly weaved with softer numbers like ‘Your Ears’ and ‘When I Wake,’” Sayer says. “We hardly ever play those softer ones unless someone wants to hear them. Things are always changing. Lemonland was mostly myself on all of the selections, but the songs have an obvious sound of their own when played through our trio of scoundrels. It’s a bare-boned approach live, and we dig it.”

After the release of Lemonland, The Humms operated as a quartet for a while before taking a hiatus. In 2011, the death of Sayer’s father, longtime Northeast Georgia bluegrass musician Clem Sayer, put a hold on touring and recording. Sayer reassembled the band with various lineups after that.

“We’ve been from four to three to one to none,” Sayer says. “And now we’re back at three. I think my favorite lineup has been the trio, though.”

Sayer and Ryder recently enlisted Zeb Garrison on bass, or, as Sayer calls the instrument, the “doghouse.” Garrison has swapped his electric four-string for a full-sized upright bass on occasion. Meanwhile, Sayer’s sticking with the reverb knobs and distortion pedal that give his old guitars their fuzzed-up tones.

“I’ve grown to like the drier, piercing tone, currently, anyway,” he says. “Some effects are cool. I used to do the whole pedal board thing, but I realized I was just covering up the fact that I needed to work on my playing more.”

The Humms have fired things up this year, bouncing back into action with a pile of new tunes. Sayer has collaborated with pals in other bands through Gypsy Farm Records, too, including The Rodney Kings, The Ghost Lights, Uncle Skunkle and The Scarecrow Family Band.

“Our main drain at the moment is our third release, a compilation recorded entitled Gypnosis,” Sayer says. “It features a handful of fantastically freaky music from garage-rock, Scooby-pop and poppin’ punk bands that have recorded at the Gypsy Farm studio. We’ve released two new songs this year, not including a Christmas recording we did last year called ‘Santa Claus Is Watching You’ by Ray Stevens. I’ve been up to a bit of writing for other little musical mistakes like The Ice Creams, Shoal Creek Stranglers and, most recently, The GypSINettes, a ’60s ghost-girl group.”

It remains to be seen and heard if The Humms will reach full potential this year or next, but Sayer hints that he has “some ideas creepin’ around.” He seems less interested in developing a new style or a new sense of rawness or refinement and more into the idea of bashing out joyous gonzoid rock ’n’ roll for as long as he and his bandmates can stand it.

Bonnaroo, Day 1: In the Summertime, When the Weather is Hot