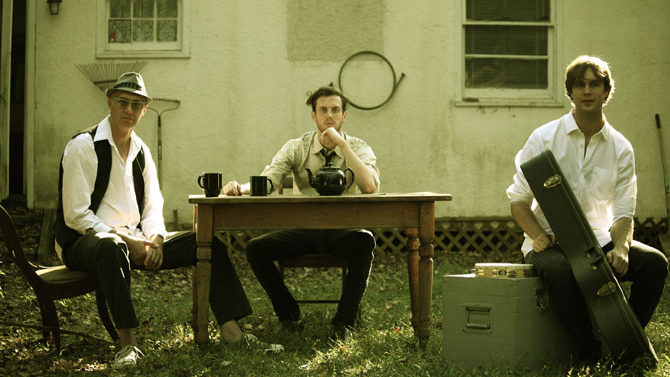 Music runs in the Callaway familyâ€™s blood, and that blood is the color of Georgia clay. England in 1819 consists of brothers Dan and Andrew Callaway, their father Liam and a rotating cast of orchestral musicians. The Callaway familyâ€™s time in Georgia dates back to William Callaway, Jr., an Athens-born traveling salesman and WWII pilot. Callaway played trombone and sang for his group Bill Callaway and the Counts, performing for many dances in the 1950s and cutting several records. William Callaway passed his name and his musical talent to William Callaway III (nÃ© Liam), who played in new wave bands of his own in the 1970s around Athens before moving his family to the English countryside.

According to Andrew, he and his brother â€œvisited Athens in the summers and during Christmas,â€ but by and large grew up in this pastoral environment, immersed in local music scenes and playing music with their father. While there, the brothers subsumed a dominant emotional strain throughout their music which Andrew has labeled â€œEnglish introspection and brooding.â€ That feel lends the kind of gravitas to the England in 1819 sound shared by acts such as The National and Mark Lanegan. England in 1819 takes its name from a dark poem by Percy Bysshe Shelley recounting the woes of a rapidly industrializing nation facing upheaval in many forms.

Andrew and Dan returned to the States to continue their formal training in conservatories in Ohio, with Andrew studying composition and Dan studying French horn. Andrew traveled and pursued classical music as a career before returning to the South and rediscovering his love of indie rock. Though acknowledging the distance between the classical and independent music worlds, Andrew found the similarities in the â€œengaging structure and texture” of both genres and relished “spending that much time with people talking and analyzing [how] music is made.â€

Having returned to the South, Andrew reunited with his brother Dan and his father Liam in Baton Rouge, and began writing songs again. These songs began as piano compositions and grew to include haunting orchestral swells and massive atmospheric climaxes propelled by Andrewâ€™s Thom Yorke-esque tenor.

To successfully execute this dramatic sound, England in 1819 expanded to include opera singer Zuly Inirio and percussionists Jonathon Alcon and Alex Alfortish. With the lineup complete, the group settled in a downtown Baton Rouge living room to record its first album, Three Cheers for Bertie. The debut embodied much of what the group desiredâ€”meticulous composition, thoughtful melodiesâ€”but lacked the necessary studio firepower to propel its histrionics into the stratosphere. Enter producer Mark Bingham. Having worked previously with the explosive emotionality of Florence + the Machine and the simmering resolve of Tom Waits, Bingham possessed the experience necessary to perfect England in 1819â€™s sound. With the assistance of mixer Stuart Sikes of Elmwood Studios (The White Stripes, Cat Power, Modest Mouse, Explosions in the Sky), they have crafted a stellar work, equal parts emotional resonance and craft, constructing a vision born from the widespread locales of its makers.

â€œIt was hard at first, turning over those decisions,” says Dan, “but [Bingham] was great at inhabiting our vision.â€ With that vision realized, England in 1819 is set for a triumphant homecoming that will poise them to carry on their Athenian legacy.