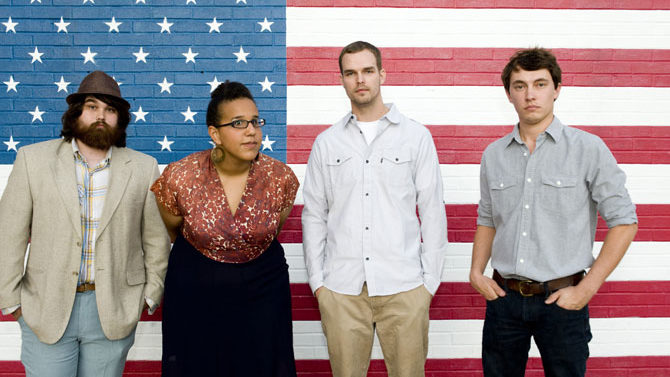 Itâ€™s a familiar story: when two or more musicians love each other very much, they sometimes show it by forming a band. Less common is a story like that of Alabama Shakes; in less than a yearâ€™s time, this band has gone from obscure to enormous. Theyâ€™ve garnered wide-scale notoriety, performing for NPRâ€™s South by Southwest showcase, selling out venues all over the country and even appearing as musical guests on â€œConan.â€ The fact that the bandâ€™s debut full-length studio album, Boys & Girls, isnâ€™t even slated to drop until Apr. 9 makes their dramatic rise to power that much more impressive.

â€œItâ€™s pretty incredible,â€ says drummer Steve Johnson. â€œSummer of last year, we would play to, like, 30 or 40 peopleâ€”if we were lucky. Nobody knew our songs or anything. When we first started doing it, it was cool that we would go to a town and there would just be people thereâ€¦ Now, itâ€™s going bigger faster than we anticipated, I guess. Not that itâ€™s a bad thing; itâ€™s just kind of overwhelming.â€

Alabama Shakes began their epic journey in April of 2009 when guitarist/vocalist Brittany Howard, bassist Zac Cockrell and Johnson joined forces, with guitarist Heath Fogg coming on board soon after. In the summer of 2011, the band took a giant leap forward when writer Justin Gage featured the track â€œYou Ainâ€™t Aloneâ€ on his popular blog Aquarium Drunkard.

â€œRight after that,â€ says Johnson, â€œthe phones pretty much started blowing up. We were getting offers to play in different places, asked about management, booking agenciesâ€¦â€

At this point, Alabama Shakes found themselves in totally new territory. What were they to do with this newfound acclaim? Luckily, as he so often does, Drive-By Trucker frontman Patterson Hood swooped in to save the day and give the band a nudge in the right direction. Hood happened to be nearby when the Shakes were playing a show near their hometown of Athens, AL.

â€œI guess he had heard about us,â€ says Johnson, â€œso he decided to come by and watch us play. Afterwards, he talked to us about meeting with his management, who was also in town for his show. We started talking to them, and they kind of hooked us up with a couple of showcases and got us with a good booking agent.â€

Once the band found itself well equipped to tackle the big-time, its members had to make enormous, life-changing moves. All in their mid-to-late 20s and with families, the Shakes had grown accustomed to normal-paced, small-town life.

Johnson describes the sound of the Shakes’ upcoming record as â€œwishy-washy-garage-rock-soul-revival.â€ Anyone whoâ€™s heard the band knows that Howardâ€™s dirty, soulful vocals combined with the rest of the bandâ€™s passionate and intense playing creates a sound that feels simultaneously novel and retro. Howard, the Shakesâ€™ chief lyricist, has managed not only to move audiences, but also her own band.

â€œFor me, itâ€™s like a roller coaster,” says Johnson. “It can be kind of emotional because I just think about where we were when we were recording it, what we were all going through. Certain songs bring up certain memories. Some of the stuff that Brittany [Howard] saysâ€”we never really knew what she was saying until we got into the studio and could hear back what she was sayingâ€¦ and it was moving. She shares stuff thatâ€™s going on in her life in her songs. It just makes you feel.â€

The emotions of a band at this point in its career must be difficult to sort out; we are, after all, only at the beginning of the Alabama Shakes saga. Now the band has to face the reality of realizing its dream.

â€œItâ€™s all very new,â€ says Johnson, with a slightly nervous laugh. â€œWe never really got outside of our state until we could really afford to. We never had the means to rent a van or book shows in other places made available to usâ€¦ When you live in a small town and work a day job, you kind of adjust to that. You think about doing it for a living or that being your careerâ€”how awesome that would be. But until it happens, you donâ€™t really think about it seriously. You prepare yourself for everyday life, then youâ€™re playing concerts, people are singing your songs, and the shows are sold out. Itâ€™s a good feeling, but it can be scary, too.â€

In case you missed Alabama Shakes’ riotous performance opening for Drive-By Truckers a few months back, Johnson gives us a preview of what to expect. He says an Alabama Shakes show is not unlike the extraordinary climax of John Carpenterâ€™s 1986 masterpiece Big Trouble in Little China. In anticipation of the Shakesâ€™ upcoming visit, let us storm the aisles of all video stores and re-familiarize ourselves with that reference. Amen.