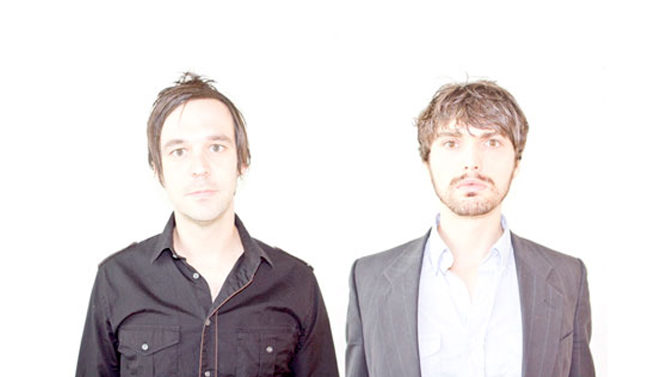 Athens-based duo pacificUVâ€™s work has been drooled over by everyone from Spin to Pitchfork to NPR, even garnering the honor of â€œmasterpieceâ€ from Rolling Stone, but no one could blame you if you still hadnâ€™t heard of them. In these days of Internet-fueled frenzied hype and turn-and-burn releases, the dreampoppersâ€™ pace of three albums in eight years has made them easy to miss. This is not lost on frontman and primary songwriter Clay Jordan.

â€œI think with the first two records, I tended to be more of a slow person,â€ he says. â€œSome people like stimulants and some people like depressants, and Iâ€™m certainly a depressants personâ€”if thatâ€™s an analogy for personality.â€

This sentiment is reflected beautifully on pacificUVâ€™s latest release, Weekends, a fuzzy musing on the end of a relationship filtered through the experience of self-medicating on those lonely Friday and Saturday nights when, as Jordan says, “you have free time and you’re more introspective and you’re more alone.”

What the band lacks in prolific output it consistently makes up for in thoughtfulness and quality. Weekends offers up chewy themes of loss and cognitive dissonance made accessible by a patina of pop sensibility provided by co-writer, bassist and knob-fiddler Suny Lyons.

â€œInitially, my contribution to pacificUV was the studio,â€ Lyons says. â€œClay had a bunch of songs that heâ€™d started writing when he moved back from Portland, and he booked a bunch of studio time to work on them.â€

That collaboration in the studio soon began to grow, with Lyons contributing by playing more and more instruments on the record and soon, doing some of the songwriting as well.

â€œMaybe a really good example is the song thatâ€™s sort of like our single: â€˜Funny Girl,â€™â€ says Lyons. â€œThat was one of the first songs that we really co-wrote, that I ended up singing. Itâ€™s basically about being in love with someone whoâ€™s hopelessly and fatally aloof and blasÃ©, and the state of feeling unable to change the way that youâ€™re in love with that person. Clay and I each had our own experiences with that to bring to the story, so we started writing that song together.â€

Lyons leaves his fingerprint on the record in other ways as wellâ€”such as the existential quandary â€œIâ€™m Here (But Itâ€™s Not Me)â€ and the touches of ’70s and ’80s pop in his ode to My Bloody Valentine: â€œBe My Only Shallow Loveâ€â€”but the bulk of the songwriting and the overarching theme are decidedly Jordanâ€™s.

â€œI do [see this record as a concept album] to a certain degree,” says Jordan. “I like the idea of suggesting a narrative and then having the audience fill in the blanks.”

While Weekends is indeed a mournful record, itâ€™s not so melancholy as to be reserved for sad-day playlists or shelved until you need a good cry after a break-up. This is thanks in part to the vein of warm electropop that runs through it and in part to Jordanâ€™s shift toward a more optimistic perspective.

â€œI think Iâ€™m moving more toward the stimulants side, in terms of more upbeat music,â€ Jordan confides. â€œSo, whatever, if this recordâ€™s average is 80 bpm, the next recordâ€™s like 100 or 120 bpm.â€

Also changing for pacificUV is the slow pace of the bandâ€™s output. Lyons and Jordan are already working on a new album which they hope to release by this time next year, and theyâ€™re planning to tour more extensively to support this record than they have done for any of their previous releases. Theyâ€™re also managing, along with a small group of fellow musicians, a new record label called Mazarine (which released Weekends), a nonprofit they hope will empower musicians to make more money from their projects, rather than frittering it away on middle men.

â€œWe want to have this group of people who are all on the same page about quality of work and quantity of work and trying to create something thatâ€™s special,â€ says Lyons.

With a fresh wave of warm praise for their latest record, a label that supports the interests of its docket of artists, and Jordanâ€™s newfound â€œstimulant personality,â€ pacificUV seems poised at last to reach the level of success and notoriety their work and its attending press have long suggested they deserve.