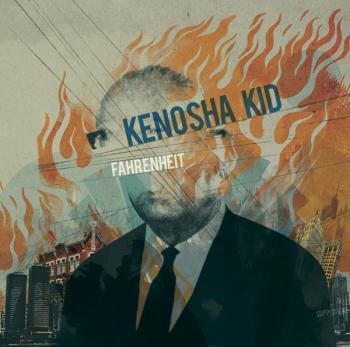 Frigidaire Friday afternoon. The Normaltown neighborhood probably made the overcast October day seem less ominous, with joggers and women-with-children passersby painting a more boring Brueghel scene. It was this quotidian quiet that ionized the whole thing. An artist lives here.

On the phone, calm and kinda funny, in person at his home, calmer and funnier still, Dan Nettles is the type of laid back and unpretentious artistic wiz who typifies most masters of the Athens music scene. Bandmate Neal Fountain lives nearby, too, and we all grab a coffee. We talk while listening to the newest test pressing of their Fahrenheit vinyl, to be produced in 500 copies.

“You Never Did the Kenosha, Kid.”

Taking its name from an obscure Thomas Pynchon reference in Gravity’s Rainbow, Kenosha Kid has been a staple of Athens since 2001. Guitarist Dan Nettles is the gravitational fulcrum of Kenosha Kid, with an orbiting group of contributors who have played with him furiously over the years, sometimes performing as a trio, sometimes a six-piece, or somewhere between. Half improvised and half practiced, the band’s latest composition relies on the near-ESP that bands acquire when the members “get” each other.

“I’m sick of the generic sax player solo and then an anonymous backing band. I’m all about having a great band sound, using a vocabulary that we have developed together after years and years playing with Neal and Marlon [Patton],” Nettles says.

Nettles talks with standing concision, punctuated thoughtfully after each point. Fountain is his complement and counterpoint, a focused rambler if

there ever was such a thing. They seem to always agree. ESP, indeed.

“It Was a Pleasure to Burn.”

The first line of Ray Bradbury’s Fahrenheit 451 may well be the refrain of Nettles’ Kenosha Kid project. Trained in jazz at Berklee College of Music, it seems Nettles would love nothing more than to burn down the entire jazz music enterprise in an act of total annihilation, if only to open the minds of the layman, confound the critics, test the orthodox and delight the informed.

Fahrenheit is at the bleeding parameters of genre, lying somewhere between rock’s primitivism and jazz’s modernity, with sometimes surf-rock riffage, acidic freak-outs, in-joke spoofs of ragtime standards and space-rock pedal-work—all of which can be taken as a big “fuck-you” to so-called “jazz rules” and still be a nod to the aesthetic avant-garde.

“Rules become a burden, and you have to re-evaluate what they’re doing for you. I think that happens in any art form,” Nettles says.

“Ultimately, rules are a way to control or to say ‘Well, I told you so, you should have followed the rules.’ Well, at least I wasn’t boring from just following rules,” says Fountain.

“They should just be tools. It’s a hammer. Sometimes, it’s fun to build a house with duct tape and a penknife. You end up with something more beautiful. [This is to say] the wrong tools,” Nettles adds, laughing.

Rules out of the window, Kenosha Kid is more like post-rock if jazz was still a part of that commentary instead of its vestigial tail.

Fahrenheit is a re-contextualization of the book by the same name, shaping an instrumental narrative with similar themes of postmodern detachment and censorship as the novel. Nettles’ Fahrenheit work began when the Ritz Theatre in Brunswick, GA commissioned him to create a soundtrack for a staged reading of the novel back in September 2007.

“It was about an hour and a half. We had musical cues between scenes of when to play each part,” Nettles says.

Their second staging was a year later and included a two-sided composition, with sheet music on the right and related excerpts from Bradbury’s classic on the left, so the players could read both simultaneously. As the songs were subsumed into Kenosha Kid’s setlist, the guys made the decision to record the whole thing.

“It was easy to make and easy to record. Everything was a maximum of two or three takes for each song,” Fountain starts.

“The music’s gotten way bigger. It’s grown into a huge Goliath of a thing, and it’s still growing… Fahrenheit can be seen as a bleak world of the future where they have lost their connection to roots music. It’s a human yearning for something expressive to happen,” Nettles finishes.

The music is a paradox. While Kenosha Kid’s previous commission work included a more back-to-basics blues score for the well known Buster Keaton silent film Steamboat Bill, Jr., Fahrenheit is as much a metacommentary on the past as a peek into the future.

“Parts of it are pre and post. If you take a couple of tunes and put ’em beside each other, it’s like watching the beginning of 2001: A Space Odyssey. You’re taking apes and they’re fighting each other, but there’s this giant futurist obelisk making the background music. For instance, some of the attitude is caveman-ish—with sophisticated electronic instruments that nobody uses; at the same time, we’re beating the shit out of them,” Fountain says.

Progressive in the philosophical sense, this is the level of the conceptual core that informs the band’s work. And while Kenosha Kid may be iconoclastic, its work touches on one of the fundamentals of “jazzbandism”: innovate by any means necessary.