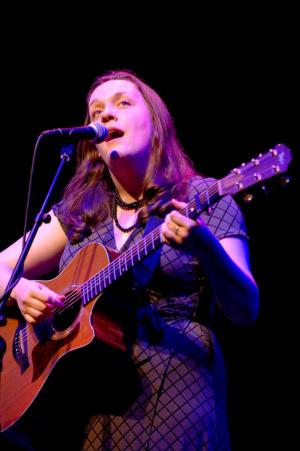 It would be easy to accuse Lucy Wainwright Roche of hitching a ride on the coattails of her famous family members. She is, after all, the daughter of Loudon Wainwright III and The Roches’ Suzzy Roche and half-sister of Rufus and Martha Wainwright, and much of her musical background stems not from performing but from tagging along with her touring parents as a child. With her small, doll-like speaking voice and large, peering eyes, it can be hard to imagine her taking the reigns herself and jumping head first into the messy music industry.

Such an accusation, however, would be a huge mistake. Behind the tiny voice and childlike baby blues lies a unique force, something wholly different from the rest of her clan, a quiet strength that allows the Brooklyn-based Roche to hold her own whether opening for her musically flamboyant brother, providing backing vocals for the mountainous voice of Neko Case, or writing and performing her own songs. It’s something unexpected. In fact, Roche herself never saw it coming.

“I grew up on the road with my mom. We toured a lot when I was a kid, so that was really a big part of my life. But when I went to college, I wasn’t really into pursuing it for myself,” she says. “I ended up getting a master’s degree and going into teaching.

“As a kid, I obsessively listened to music all the time, but I wasn’t writing,” she continues. “I wrote a little bit toward the end of high school and beginning of college, but then I stopped.”

It took a month-long stint on the road with her brother in 2005 to reawaken the urge to tour, after which she started writing again and began composing soft, folkish songs that sound not like someone trying to fit into the scene but rather someone with the scene in her blood. To better put it, she’s as uncomplicated as Rufus is grand, as earthy as he is theatrical. And with a voice that’s crisp, clear and sweetly communicative, it’s strange to think she ever considered doing anything else.

“[Being a musician] is great. Everybody in my family is incredibly supportive and helpful, and Rufus has a really great attitude. He tends to believe the more the merrier,” she says. “There’s no sort of weirdness about me joining the business.”

Her brother has inadvertently provided some help on her way, such as introducing her to Neko Case at an Atlanta show in 2007. Since then, she has provided back-up vocals on Case’s latest record, as well as provide back up for Case on “The Late Show with David Letterman.” She’s also scored opening slots for Over the Rhine, Indigo Girls and Madeleine Peyroux, and she’s living the dream for some of us who wish we were in a position to hang out with and sometimes inspire our favorite songwriters.

“There are a lot of people I listened to when I was younger and now have gotten to work with, like Dar Williams. I feel incredibly lucky to have the resources and to be on the road and be able to meet these people,” she says. “You never really know what’s going to happen.”

While she’s battling the open road with people like Neko Case and Dar Williams, she’s also spending more time getting to know her family on a better level. Touring, she says, has actually made it easier to stay in touch even though it means she’s rarely home.

“It’s great to get to spend some time together on the road with my brother or my dad or my mom, because when a bunch of people are touring all the time no one’s ever home. Rufus and I even live in the same city, but we’re never there at the same time. So, we get to hang out on the road.”

When Roche hits Athens on May 15, she won’t be with family, but she says she hopes to meet some people who enjoy the music, and maybe make more friends while she’s at it.

“Being on the road can be a lonely thing, but every once in a while you meet people you connect with in a big way,” Roche says. “And that sort of makes up for the lonely times.”