Off The Cuff And Up The Sleeve 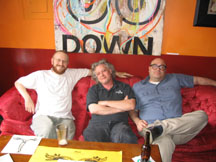 Musicians Erik Hinds, Craig Lieske and Marshall Marrotte are at the forefront of the Athens improvised music scene. Lieske – a member of Garbage Island, Spindle, Ill Lit and a number of other projects – and Marrotte have frequently worked together; along with Tony Evans, they form improv/drone group Desk Pussy. Hinds has spent more time performing solo, but tonight the three unite as a trio of duos, with two musicians improvising together as one sits out: Hinds + Lieske, Lieske + Marrotte, Marrotte + Hinds.

The three suggest that they may close their show with an improvised trio, combining Hinds’ h’arpeggione with Lieske’s guitar and Marrotte’s guitar and electronics. Flagpole sat down at Flicker last week to share some beers and discuss improvisational music with the trio.

Flagpole: Tell us about the structure of the show. It’s going to be the three of you playing as duos?

Erik Hinds: That’s right. I’d known these two guys for a while, and admired them as musicians, and it just sort of came up that we should all play together.

Marshall Marrotte: I’m pretty excited about this show, because it’s coming right when the PopFest starts, so I think it’ll provide a nice alternative for that. Not that, you know, there’s anything wrong with the whole pop thing, it’s just we’ll be totally different.

But yeah, Erik asked [Craig and me].

EH: It just seemed like now was the time.

CL: When I found out that [Erik and Marshall] had talked about playing, I thought this would be the perfect time, so I said “Let’s do it.”

EH: Yeah, I’m kind of a hermit and haven’t branched out much. I had four or five people who I was playing with regularly, but they’ve moved away and now I’m trying to make new friends. [Laughs]

CL: Generally it’s always nice playing with someone you haven’t played with before. There’s always something to learn from anyone, and expanding your performances like this with different people can only be good.

MM: Except when it’s not good.

EH: Well, it doesn’t always work out, but usually if you’re mature enough as a musician you can establish a connection with someone.

FP: How can you facilitate making that connection?

CL: It might take a couple of minutes to click in, but a good improviser can work in any situation.

MM: It really does take years and years to become a good improviser. I think, especially in a pop-centric society like ours, there’s a misunderstanding about what improvisational music entails. Most people, when they hear “improvisational,” they think “jam band” or “jazz.” Not to knock those forms and bands like that that play at the Georgia Theatre, or what have you, and they do improvise, but that’s not what we do. It’s not something you can do right off the gate, and I think all of us have different skills that complement each other.

EH: I’ve been watching both of you perform for a while now, for several years, and I feel like the skill level just keeps going up and up and up. I think we’ve got the beginnings of a world-class, non-idiomatic improvisational music scene here in Athens.

CL: I agree. That’s one thing that I, and I’m sure this is going to sound controversial, but I’m very impressed with the people in this town who are doing improvised music, and not so impressed with people from the rest of the country who are supposed to be the best, and especially Atlanta – I think having this little island in the middle of Georgia helpsâ€¦ it’s a real underground scene, and I see it developing.

FP: Do any of you prefer to play in a group?

CL: A good duo improvisation is like a conversation, really.

MM: Well, I think the duo is the hardest configurationâ€¦

MM:â€¦ no, I think it’s harder than playing solo! You can’t indulge yourself as much as you can when you’re solo.

EH: Do you get nervous beforehand?

CL: If I’ve got to improv solo, my knees are knocking.

EH: That’s the funny thing with a solo. I think solos are harder. I find if you abandon all your concepts, you have to flow and not seem like you’re making mistakes, but as soon as I start with a second person or a third person, then my mind tries to structure a little more rhythmically.

All the roles of melody, harmony and such, they can change within the ensemble. People think of chaotic harmonic structure, or something that has no repetitive rhythm or continuity. I adapt musically and pivot around a focal point-pitch, but I’m not concerned with what key it’s in, or what pitch, but I always have something for the listener to latch on to.

FP: Do you try to make it a completely free experience, or do you have a bag of tricks you can pull from in case you’re in a corner?

CL: Well, everybody has their stock tricks, but the goal is not to fall back except for the most dire of circumstances, otherwise you’re just bankrupt as an improviser.

MM: If you change, and have a plan going in to something, a structure will usually present itself. Everybody in the group knows it and will pick up on it, and you hang on to it until it’s not useful anymore and you pick up on the next idea that comes along. Structure’s not something to avoid.

EH: For myself, I have a vocabulary I draw on, but I’m always surprised with new combinations. You can’t reinvent the wheel; it’s still music, it’s still sound, it’s still silence, and you’ll always have the same range of notes to choose from. It’s just new combinations. Somehow in the moment, though, and you’d never expect it – you guys know what I’m talking about – sometimes a combination of notes will occur, and you’ll go home and write something a little more premeditated based upon a totally new idea.

MM: That happened to me this past weekend playing in Atlanta.

MM: I don’t even know what happened. I played in a totally new way from anything I’d ever done before. I don’t know where it came from.

CL: You should’ve seen the look on my face, man, when he started in, and I had to turn around and see if it was still Marshall, cause I thought maybe someone else had joined in! I think the situation merited it though, him going all aggro, even though it was nothing we planned out.

MM: The thing about all music, be it punk or reggae or rock or whatever, is that all types of music start out as an improvisation. Everything starts out from nothing, and someone’s got to come up with ideas as they go along, and rework them and refine them to get a good soundâ€¦ the fact that we all listen to different types of music is so helpful, because you can pick out a bass idea from Lee “Scratch” Perry’s reggaeâ€¦

EH: There have been two things, really, that have inspired me lately, and I get inspiration from taking walks in the woods and things like that, but musically, there’s a lot of music from Mali – there’s stuff that sounds totally modern and stuff that’s ancient.

That, and death metal. Honestly, I couldn’t care less what they’re singing about, but that raspy voice thing taps into something ancient as well, you know, it’s in the Korean tradition, the Japanese traditionâ€¦ Improvisationally, that’s the kind of thing that’s been squirreling around in my head lately.

FP: Do you feel it’s necessary or helpful when improvising with other people that you share a similar background?

MM: Not at all. I’d rather play with someone who’s totally different from me.

CL: I’ve never had a lesson in my life, and I have huge gaps in my musical education. I can’t relate to notes on a page at all, but Erik’s excellent at that, and so’s Marshall, for that matter.

EH: Yeah, but I don’t like to. It’s a barrier and another step between the music and the musician.

CL: I kind of hate that term. I think it reduces something which is absolutely alchemical and nonscientific to the realm of the scientific.

MM: It’s a little insulting, sometimes, because we’re all coming in to this knowing that something’s going to come and that there will be a certain structure. The only thing that’s experimental about improvisation is when it comes to the accidents, whether they be happy accidents or bad accidents – the things that are left up to chance and how you react to themâ€¦

FP: Talking about all these different influences and approaches and types of improvisation raises the question: Is improvised music accessible to a casual listener?

CL:â€¦ maybe not as much as 40 years ago, but it’s still very alien. Take for instanceâ€¦ a show we played last year at Flicker where me and some other musicians were all blindfolded. My father came to the show, and afterwards he asked how long we had rehearsed, and he just could not understand how it was possible to improvise like that. Finally I told him that it’s like learning a language – it’s meaningless unless you all know the same words, and then you can speak to each other.

The thing is, if you took anybody off the street, someone who’s not a musician, and said, “Improvise something orâ€¦ I’ll kill you,” for instance, they’d be able to. It’s hardwired in our brains.

EH: People are accustomed to a song’s length of being between three and six minutes. They’re accustomed to a certain form for music. A lot of people think it’s people getting together and being clamorous, making a big racket, not knowing what we’re doingâ€¦

MM:â€¦ but it’s simple. It’s making songs up as you go along.

Letter to the Editor