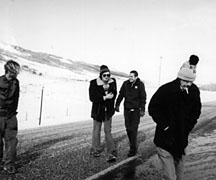 Guitarist Rob Lomax’s band The Good Ship excels at creating songs that sound both intimate and lush at the same time. Like the best guitar-based pop songs, the tracks off of the band’s self-titled debut album would work well as a minimal guitar-and-voice combo.

But the full-band approach allows for a more propulsive, compelling effect. The songs themselves come across as light and airy, but Lomax’s voice anchors them, giving his stories about drive-in movies and Blenheim’s ginger ale weight and universal appeal.

The songs of The Good Ship are also brave enough to vary tempo, instrumentation and tone; while many bands tend to find a suitable effect (creative percussion, an intricate guitar picking, etc.) and focus primarily on exhibiting it, songs like “Dream #4,” “The Maco Light” and album opener “Sunrise Estates” will place brushed cymbals, easygoing whistling or galloping banjo/ guitar combinations in just the right places – and in modest amount, maintaining the whole keep-’em-wanting-more approach.

Lomax recently spoke with Flagpole about his recent work, his approach to collaboration and the new Good Ship album, due out in, let’s say, November.

Flagpole: The Good Ship has gone through some lineup changes recently.

Rob Lomax: It’s actually changed pretty considerably over the past year. Our old violin player [Carla Wood] moved away, and now our new violin player is Liz Durrett. She’s a songwriter as well, and is quite, quite good. She’s playing out on her own a bit now, and I’m trying to convince her to let me play with her, but who knows.

We’ve also got a new bass player, Patrick Hargon, who’s played with the Sunshine Fix. It’s changed things around, although the core of the group is the same: there’s Jesse [Flavin, guitarist,] who’s played with me for years, and our drummer Brent [Jones]. There’s also another longtime member Daniel Rickard, from Viva. He sorta still plays with us, although he’s hard to get in touch with sometimesâ€¦

FP: It’s been a little more than a year since you released the album on Orange Twin. What’ve you been working on since then?

RL: Basically, we’ve been working on a new record for a while. We did some sessions at Chase Park, and have taken a long break and at some point will head back out there to finish it. We’re very slow [laughs]. But just about certain things! Maybe we should try a little harder. With the different members leaving, it’s a good time for us to go back and start work again.

FP: Have you thought about Orange Twin or another record label yet?

RL: I’ve just thought about finishing what I started with this record!

FP: What appeals to you about playing with a full band? You and Jesse have frequently performed together as a duo.

RL: We’ve done that a lot. In fact, the show at Tasty World will probably be kinda stripped down – although maybe not. I don’t think our drummer will be around, so it’ll probably be more of a low-key thingâ€¦ The last time I performed in this sort of stripped-down style, some of the songs [I played] I hadn’t played in a while, so it’s always fun to stretch the arrangement and work on my singing. With the full band, the drummer and everything, sometimes vocals can get drowned out a little.

FP: There’s a lot of sharing of members between The Good Ship and Carolyn Berk’s band Lovers, which just put out an album on Orange Twin.

RL: Yeah, Jesse, Brent and Daniel play with Lovers, and I have played with them, like on tours and every now and then. Carolyn’s moved to Boston, although I think she’s coming back into town at some point pretty soon to maybe do some more recording.

FP: So when you’ve got two very similar groups of people working on two songwriters’ material, is there ever a desire to just say, “Let’s get together and become one band with two songwriters”?

RL: Well, that was never really brought up because Carolyn always wanted to do her own thing and have it be all hers, which is totally fine. With The Good Ship, I’m actually looking to do more with other people, and I would not be opposed to having other members start to bring in more ideas. That way I wouldn’t have to write or propose all the material.

Jesse’s a great songwriter, and he’s starting to focus more on that, so I’d love to get Jesse to contribute more to the group. He’s also the best guitar player I’ve ever played with or heard. He picks things up well and plays very tastefully, and has a good ear for interpreting other people’s songs. Some people, you know, could be a great guitar player or musician but they don’t really understand the material or aren’t sympathetic to it and will shred all over it. Jesse’s very sympathetic.

FP: So what do you look for when you collaborate with other musicians? A lot of the songs on The Good Ship seem like they came from one place and from one songwriter.

RL: Well, those are pretty much the first songs I really wrote. I was a drummer for a long time, and the songs on the album were my first foray into song writing. I think our band is open to members bringing whatever they want to the table, and I think I can be pretty open about it.

FP: So is there a projected date or goal for the new recordings to be done and ready to go?

RL: You should just pick a date! [laughs] Pick a date and print it in the paper, and that way we’ll have a deadline to stick to. I mean, honestly, we were supposed to finish it this week. I alluded to the hard-to-find Daniel, and he’s recording this for us – he recorded the first album as well – and so he’s engineering everything, but we couldn’t find Daniel. We put out an APB, and we just found him, so maybe we’ll have something finalized soon.