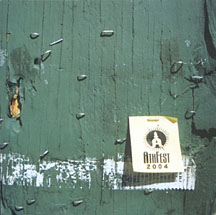 The Mir space station, launched in 1986, was initially to stay in orbit for seven years, the expected life span of any satellite circling the earth. The AthFest compilation CD, however, is in its seventh incarnation and going strong, with all indications that it’ll maintain its orbit around the Athens music scene.

Also this: The Japanese Bay anchovy has a life span of seven years, but to say there’s nothing fishy about the comp… that’d be too easy, yeah?

The capable and talented Russ Hallauer – musician, record label boss, etc. – is the one to thank for the majority of the effort behind the comp. He produced the collection, and his Ghostmeat Records has, as it has for the past six years, released the album. Mastered by Jeff Capurso and designed by David Fairburn, the album works as a sampler into the local scene.

The big CD release party kicks off Friday, May 14 at 9 p.m. The show’s free and features four of the acts lucky enough to merit a slot on the disc. Heidi Hensley performs a vibrant folk-rock set with her full band at 9:45 p.m., followed by the twang of the book-smart country rockers Stories Below at 10:45 p.m. The creative punk of Let’s Surf hits the stage at 11:45 p.m., and rapper Ishues grabs the mic at 12:45 a.m., backed by the live Herb and Skills band. You’ll be able to pick up a copy of the album for your very own at the show for only $8!

And how is the album? It’s impressive, and a step up from last year’s bland offering. As on past AthFest comps, about half of the songs are previously unreleased tracks from established and upcoming local acts, and won’t be found elsewhere.

This year’s comp kicks off with a fuzzed-out batch of indie-pop bliss from the Wee Turtles. “Flame On!: My Life As A Human Torch” combines the weird sensibilities of Marvel Comics’ Fantastic Four with perfect ba-ba-ba-ba-ba choruses, making this track probably the best intro to an AthFest comp yet. Ceiling Fan‘s entry “Como Te Llamas” of the recent album Hot Streets, combines power-trio riffs with an amiable jangle, topped off by off-kilter vocals that suggest a more rock-oriented John Linnell of They Might Be Giants.

The AthFest comp hits its first snag, however, with Elf Power‘s “Walking With the Beggar Boys,” off the album of the same name; an album that’s not the band’s strongest. While it’s great to see such an established local act featured – this is the first time one of the more central Elephant 6 acts has appeared on an AthFest disc – you get the feeling the track was chosen merely for its Vic Chesnutt backing vocals.

Bain Mattox and OverflO also find their way onto the album, with polite but unaffecting songs of generically Southern pop-rock of their respective albums. And despite his non-impact on local live music, Jack Logan makes an appearance (wouldn’t be an AthFest comp without him!) via his Monday Night Recorders. It’s forgivable, however, as “In My Home” is a subtle delight. Heidi Hensley, hey, revolution! and several other acts have songs on the disc not indicative of their strengths as live performers, but any album with 20 diverse tracks can’t be 100 percent boss.

And diverse it is. Though still heavily dominated by the guitar band, hey, that’s Athens. You’ll find sultry German cabaret (Audition With Max Reinhardt), eclectic klezmer-jazz (Kenosha Kid) and smoky swing perfect for a slow tango (The Artie Ball Swing Band). Let’s Surf‘s “200 Words” shows why they’re one of the few bands in town who can bring something fresh to punk, and finally! finally! hip hop finds a place on the AthFest comp, with Ishues‘ “Y’all Don’t Hear Me”; it’s liberal use of the word “what” makes it the most club-friendly track off his recent album Reality Flow. If AthFest, Ghostmeat and the crew keep up like this, they’ll keep this comp up among the stars for years to come.