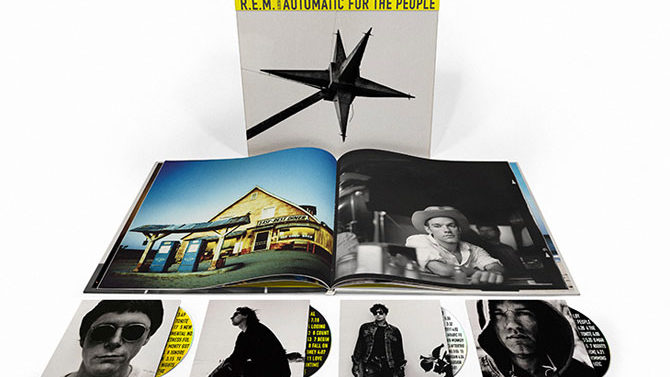 In honor of the 25th-anniversary reissue of R.E.M.’s landmark album Automatic for the People, the 40 Watt Club will host #Automatic25, a listening and viewing party, this Saturday. Proceeds from the event will benefit two local nonprofits, AthFest Educates and Family Connection-Communities in Schools of Athens.

We caught up with Jeff Montgomery, the proprietor of local-music respository Athensmusic.net and an organizer of Saturday’s event who has helped throw a number of R.E.M. listening parties over the years. The interview has been edited and condensed.

Flagpole: #Automatic25 celebrates the album’s 25th birthday, but it’s also the anniversary of the first-ever R.E.M. listening party in Athens. What are your memories from that party?

Jeff Montgomery: I was in college in Greenville, SC and working at the college radio station at the time when a fellow staff member heard about the party during a trip to Athens to see a show. Since I was a huge fan, I called directory assistance in Athens on a whim and found that there was a listing for an R.E.M. office phone number. I jotted down the number and nervously called to get information. That was my first experience in dealing with the office staff. They were just unbelievably friendly and helpful, which has been their hallmark ever since.

Back then, there were two shows—an early one with a meal included and a less expensive one afterwards. I came down and went to both. I remember several things very clearly from that event. First of all, it was my first time eating Weaver D’s, whose fried chicken and sweet potato souffle I still adore. I knew no one, so I was very quiet and shy, taking it all in. I ended up finding a seat next to a woman who I think sensed this. She was kind enough to talk with me throughout the evening, which I always appreciated. I came to learn that it was actually Mike Mills’ mom.

Community Connection was the beneficiary of that first listening party. I still remember people talking about its mission as a one-stop phone number for resources and referrals for anyone in the community and thinking, “This is a great idea… why don’t more communities have this?” … Later, I ended up joining the Community Connection board several years after moving to Athens.

Probably most importantly, this was the first time where I saw more of Athens than I was used to seeing at a late-night rock show at the 40 Watt with a bunch of college kids. Families, middle aged fans, friends of the band—it showed Athens was a community that supported its music scene and its locals. I think I really fell in love with the city that night and thought, “I could live here someday.”

FP: What was the local response to the album at the time? What was your personal reaction?

JM: I can’t speak too much to the local response, other than the fact that the people at the listening parties seemed to love it, since I was still a few years out from living here.

But for the people I worked with at the radio station and our listeners and my friends who became R.E.M. fans with me in high school, it was really an album that blew many of us away. It was so beautiful and dark at the same time and just so different from what we expected. Of course, I don’t know what any of us really knew what to expect after the curveball that was Out of Time.

FP: What’s your take on the album 25 years later? Do you hear it differently than you did back then?

JM: I think I appreciate it differently now as a middle-aged dad in more emotional ways that I did early on. Sometimes you hear people say that kids have an “old soul.” I think this album has a “old soul” aspect to it. It’s somber, it’s dark, it’s thoughtful, it’s personal, it’s wistful, it’s touching, it’s introspective. It has a few rocking anthemic songs, but it has more of those kinds of songs on it that when you sing along with them in private you really get into them—head uptilted, eyes sometimes closed. The kind you maybe don’t like to sing while driving.

“Nightswimming” has a nostalgic aspect to it that I appreciate much more now because it hits so close to home. A high school friend had a lake house where groups of us used to spend a good deal of time during summer breaks in high school and college. There was lots of nightswimming and hanging out with friends. Although we had already known each other for several years, my to-be wife and I started seeing each other the summer after Automatic came out as a result of hanging out together at this lake house.

The song perfectly encapsulates those times and what’s been gained and lost since. To me, it’s literally like watching an old VHS tape of memories when I hear it. My friend’s family sold the lake house, and those friends have had wildly different ups and downs over the years. Some are no longer with us. That song is special in so many ways as a soundtrack to that time and my life afterwards that I never could appreciate back then.

FP: What does a listening party offer attendees that they can’t get by jamming an album in the comfort of their home?

JM: It used to be that the listening parties were literally the first time you could hear the album. They would be held the day before the album came out and then Wuxtry would have a midnight sale of the record. Clearly, that’s not usually the case anymore.

There are still some unique aspects to these kinds of events—particularly this one, since it’s several weeks before the release. It is actually earlier than we’ve ever held one before. So it gets back a little to the original nature of the first ones: People will hear some unreleased music, hear the remastered version and see some of the videos before they can hear or see them otherwise. They’ll also have opportunities to pick up or win some cool items.

There’s also really a feeling of community at these events. We have fun. Since this one is being held at the same site of both the first listening party in 1992 and the only show the band played on the Automatic “tour,” it is also a celebration of the legacy of the 40 Watt Club.

JM: We’ll have some unique items to give away throughout the night, listen to the remastered version of the album, listen to some unreleased tracks, watch some interview videos about the recording of Automatic for the People and just have a good time. Attendees can also purchase a special shirt designed exclusively for the listening party.

As is usual, the band isn’t playing and won’t be in attendance. One thing not happening this time is a live auction. I’m proud of the fact that the listening parties I’ve been involved with have raised over $100,000 for local organizations over the years, a good chunk of which came from the auctions of signed guitars and other cool things. But for this one, we consciously decided to make this one more low-key and enjoyable for everyone…

Although it’s not part of the party, I should note that it is scheduled so that someone can go to Weaver D’s, which closes at 6 p.m., and idle down to the party afterwards for the full Automatic experience. It’s also an early night, so AthHalf runners can still come out and be in bed at a reasonable hour, while those who want to stay out later can stick around afterwards for a dance party afterwards with a special appearance by the Krush Girls.

JM: I never know for sure. I’ve been fortunate to help coordinate these Athens events since 2004 with the R.E.M. office for both audio and video releases, and they’ve always been held, simply put, when they made sense to do so. Sometimes I would have an idea for an event and sometimes the office would. If it made sense, we’d do it. Ultimately, of course, it is up to the R.E.M. office to decide whether to hold anything…

I hadn’t expected to do anything else after those farewell 2011 events at the Georgia Theatre and the 40 Watt and Ciné. But then it made sense to hold an event for the REMTV video package release in 2014. After that, I again thought that would be it.

We didn’t do a party for Out of Time’s 25th anniversary release. But Automatic is special, and I knew that it was also the 25th anniversary of the first listening party. So, again, it made sense to do one this time. I’m planning on this being the last one that I’ll be involved with, but I’ve said that before.