Starting the day bright and early at noon, I made my way through the crowds of Misfits shirts and into the Masquerade’s signature black-coated building to catch some smaller acts. Despite the good intentions of Auspice and Abuse of Power, the execution of their sets left little curiosity to seek them out further. Not a good start. Thankfully, The Menzingers, Deafheaven and Touche Amore performed admirably to some of the largest crowds that I have ever seen for those bands, with almost every member head-bobbing along or screaming at the top of their lungs. In terms of crowd participation, these were three of the highlights of Saturday. [Maria Lewczyk]

That is, until Ceremony began playing. Lead singer Ross Farrar steadily lunged into the crowd, drawing the brave frontlines in with arms wide open and mic in hand. The audience ate up the attention, and Farrar provided a feast. I left that show early to avoid a flood of people trying to exit the tiny door for the Hell stage, and caught the end of Diet Cig’s set outside at the Purgatory stage. The songs were boppy, entertaining and bright, and the enthusiasm from the two band members only highlighted the sparkly indie-pop vibe from the short set. [ML]

My first reaction to the freshly reunited Piebald was pure shock. The nerdy, ’90s-era emo haircuts you see in all of their press photos had morphed into long, luscious, thrash metal-worthy hair that got violently whipped around during their anthem-heavy set. It’s not often that you see a band return from a decade-long break up and look this happy to see each other. As they ran through the hits, like “American Hearts” and “Grace Kelly with Wings,” each band member had a huge, joyous smile plastered across his face, and so did every person in the crowd. [Nathan Kerce]

Next in line was Sorority Noise, a semi-new emo band founded by Cameron Boucher, also a member of Old Gray. Boucher was stoic and composed while belting out heartbreaking lyrics such as “I spent a lot of time last year learning that I don’t like me too,” only for the crowd to chant them back with fists clenched and teeth bared. The Masquerade had underestimated the intensity and size of the crowd, and the outdoor Purgatory stage was no match for the Sorority Noise fans. The tiny metal grates lining the stage were toppled about 15 minutes in, and staff had to hold up the barriers for the remainder of the set. There was an absurd amount of crowd surfing, considering that the show was performed on solid concrete. Oh well. [ML]

Later in the evening, Drive Like Jehu performed an excellent reunion set with super-fans heaving their bodies into the front row of the outdoor Park North stage. The atmosphere was intense but intimate, and longtime fans of the band left the set with a feeling of closure. However, at this point the heat had taken its toll, and it was time to call it a day. [ML]

I arrived on Sunday much wiser than the day before, with more sunscreen and time scheduled for shade and water. Instead of getting to the venue right as the doors opened, I made it just in time for the 1:30 p.m. time slot of Lemuria. In preparation for the long day ahead (most of the “acts to see” alternated between Park North and South, the immediately-in-the-heat stages) most of the Lemuria audience listened to the Buffalo natives’ set from the safety of the shade. Rainer Maria stole the show. The three-piece emo band took the stage and opened with “Artificial Light,” from its third album, A Better Version of Me. To my surprise, the group sounded almost identical to their recordings, as if nothing had changed since 1995. [ML]

Tigers Jaw started playing immediately after Rainer Maria’s set, but unfortunate mixing caused a lot of people to leave the Park North stage shortly after arriving. The bass and drum kit were too loud and overpowered the vocals from duo Brianna Collins and Ben Walsh. Although the group’s set was solid and filled with hits from its self-titled first release, the sound left my ears pounding. [ML]

I waited patiently in the growing crowd for Joyce Manor, who were slated to play at 4:05 p.m. After a solid 45 minutes of standing way too close to other sweaty bodies, the band took the stage. Right off the bat, the crowd started pushing and swaying, every face within view chanting alongside vocalist Barry Johnson. The band played favorites such as “Heart Tattoo” and ended the too-short set with the double-whammy of “Ashtray Petting Zoo” and “Constant Headache.” (Johnson commented that their songs are so short, they’ve never played a full scheduled set.) [ML]

The rest of the day was a blur, with stellar performances by staple emo band American Football and popular post-rock group Foxing. Although the American Football set was unsurprising, Mike Kinsella and the rest of the group have not aged a bit. The trumpet bits from tracks such as “The Summer Ends” still brought on a heavy sense of nostalgia and sentimentality only matched by the ebb and flow of emotion from Kinsella’s spaced-out lyrics. Foxing epitomizes the “emo revival” of the 2010s, retaining similar elements to earlier bands while forming a style all their own. Both performances were beautiful and engaging. [ML]

Currently on its farewell tour, early-2000s pop-punk band Motion City Soundtrack ran through its most popular synth-fueled tunes. MTS was a band that was always on the edge of being one of my favorite bands in high school during my skate-shoes-with-knee-high-socks phase, but they just never quite hit the spot for me. Still, hearing songs like “Everything is Alright” and “The Future Freaks Me Out” and others back-to-back was an admittedly nostalgic and moving experience. [NK] 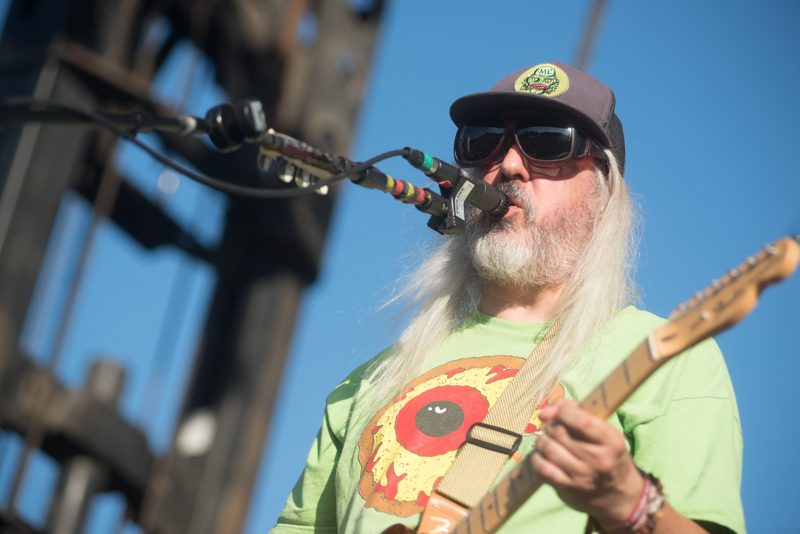 To my ears, Dinosaur Jr.’s post-2005 reunion material is some of the best work the band has ever done. Their albums have kept up an insanely consistent quality for a band that’s over 30, and I would consider Dinosaur, still, to be one of the best active rock bands in the world. That being said, their live shows can be hit or miss. On Sunday, the trio powered through a solid sundown set, featuring a lot of material off their excellent new album Give a Glimpse of What Yer Not. Unfortunately, there was an awkward moment that shouldn’t go without being mentioned. Lou Barlow had what he described on stage as a “mental breakdown,” where he threw his bass on the ground and ran backstage. He eventually was led back on stage and pushed through the set. J. Mascis had little to no reaction to the incident at all. It was a hard-to-watch moment, for sure, but the set still ended up being one of the best of the weekend. [NK]

Early 2000s post-hardcore pioneers Thursday, who were reportedly convinced to reunite after a five-year hiatus off the strength of Wrecking Ball’s initial lineup, played what was without a doubt the most outstanding set of the weekend. Even those who weren’t familiar with the band’s discography were pulled in by singer Geoff Rickly’s infectious energy and positive message. The set was heavy on Full Collapse—arguably Thursday’s best release—a good choice for a crowd that seemed mostly split between fans and newcomers. After a crazy year where Rickly was unfortunately and unfairly tied to the antics of infamous pharmaceutical exec Martin Shkreli, it was great to see him let loose on stage with hundreds of fans singing along to “Understanding in a Car Crash.” It was cathartic for everyone. [NK]