You may recognize Pinegrove from their 2016 album Cardinal, which showed up on “Best Albums of the Year” lists for plenty of music publications. The emo-folk band from New Jersey swept up fans with its alt-country twang and homestyle lyrics. The stage was way too small for the crowd; the audience piled out into the walkway and trees behind the Ponce de Leon stage, and those brave enough to stand in the crowd were crammed elbow to elbow. It was clear that Pinegrove has a massive fan base. The audience sang along to every word of every song, including “Angelina,” which was released prior to Cardinal on a 2015 compilation tape called Everything So Far. Lead singer Evan Hall was charismatic, commanded the performance and made the Pinegrove set one of the most enjoyable of Shaky Knees. [Maria Lewczyk]

Car Seat Headrest’s Friday afternoon set was a grand attempt at solidifying the band as bona fide rock stars, or as close as you can get to that label in 2017. For the most part, it succeeded. With a set mostly comprised of songs from last year’s excellent album Teens of Denial, Car Seat Headrest felt like a much bigger deal than your average indie buzz band. Songs like “Fill in the Blank” and “Drunk Drivers/Killer Whales” have a lot more impact on a massive festival stage, with band members mugging at the cameras like they’re in a Mötley Crüe music video. A solid cover of Devo’s “Sloppy (I Saw My Baby Getting)” was perhaps the biggest highlight. If I have any criticism, it’s the fact that singer/guitarist Will Toledo performed his soundcheck in a full powder-blue suit, but ditched it for the actual performance. I know it was hot as hell outside, but that suit would have added even more pizazz to an already lively performance. [Nathan Kerce]

This blurb isn’t as much about drunk-punk band FIDLAR as much as it is about the FIDLAR crowd. I stayed for the whole set, which included obvious hits like “40oz. On Repeat” and “Cheap Beer,” but was convinced to jump into the giant mosh pit halfway through. What I experienced sums up the entire FIDLAR show: Drunk teenagers and young adults lit up joints while slamming their sweaty bodies into each other. I got crushed by three massive crowd surfers who made zero effort to maneuver the crowd. Common courtesy, anyone? To top it all off, as the pit dissipated after the show, there was left a lone man with a limp. He had been trampled in the mosh pit and broke his ankle. Great show, FIDLAR. [ML]

This performance was the best of the entire festival. I waited at the Peachtree Stage for hours to see LCD Soundsystem close up, and managed to make it five rows from the front by the time James Murphy and company took the stage. The set brought a perfect combo of hits and deep cuts, including “Tribulations,” “Movement” and the pretentious mix of “Yeah.” Murphy took breaks to talk to the crowd through a gold-plated microphone, commenting on the “robot-like stage lights” and how poorly the stage crew set up their gear. (He basically remixed the performance as it was happening.) The set finished with the nostalgic double whammy of “Dance Yrself Clean” and “All My Friends,” leaving the crowd glistening with tears, glitter and smiling faces. Nothing is better than yelling the line, “Where are your friends tonight?” at the top of your lungs during “All My Friends,” while surrounded by all your friends. [ML]

The xx’s Saturday headlining set on the Peachtree Stage was a tactical, well-paced display of the British electronic rock trio’s strengths. Decked out in color-coordinated outfits, the band ran through nearly 20 songs from throughout its discography. It had been four years since the group last played in Atlanta, and its jam-packed set felt like it was doing its best to make up for lost time. The elephant in the room (or in the park) was that the band’s producer and DJ, Jamie xx, has developed a solo career that is now on near equal footing to this project. I did overhear a tongue-in-cheek suggestion that his placement on the stage, on a high platform looking down on his bandmates, may have been symbolic. While I’m not sure there’s any truth to that, the performance of his song “Loud Places” did garner one of the loudest crowd reactions. [NK]

One of the biggest treats of the weekend was the back-to-back performances of touring buddies Hoops and Whitney early Sunday. Hoops, an Indiana power-pop quartet, had just released their debut album, Routines, a week prior. Hoops’ summer-ready bops were a perfect fit for the early crowd, who clapped and woo-ed politely while trying to fit into what little shade there was around the Piedmont Stage. This was followed up by Whitney, a Chicago soft-rock band formed from the ashes of buzzed-about act Smith Westerns. Whitney performed most of its debut album to an impressively large crowd for a mid-day set. Both bands were playful, sunny and playing jokes on each other throughout the sets. It was a great time. [NK]

Third Eye Blind’s performance on the Peachtree Stage was a brief, potent set that played well among a crowd that would have mostly been small children at the peak of the band’s popularity. The majority of the setlist focused around the band’s 1997 self-titled hit album, which celebrates its 20th anniversary this year. Lead singer Stephan Jenkins, the only founding member of the band left, has a reputation for being a bit self-serious, and that shined through at times. At one particularly tone-deaf moment, Jenkins took the time to clarify that Third Eye Blind was a “guitar rock band, not a DJ band,” before performing a cover of Icona Pop’s “I Love It,” seemingly unaware of the irony.  But it’s that ridiculous sense of earnesty and entitlement that makes songs like “Semi-Charmed Life” and “Never Let You Go” hold up as legitimate pop classics all after all these years. Instead of going the Smash Mouth route, coasting off royalty checks and performing at state fairs, Third Eye Blind is still trying to make its fans feel something. Judging by the band’s performance on Sunday, it still has some of that magic left. [NK] 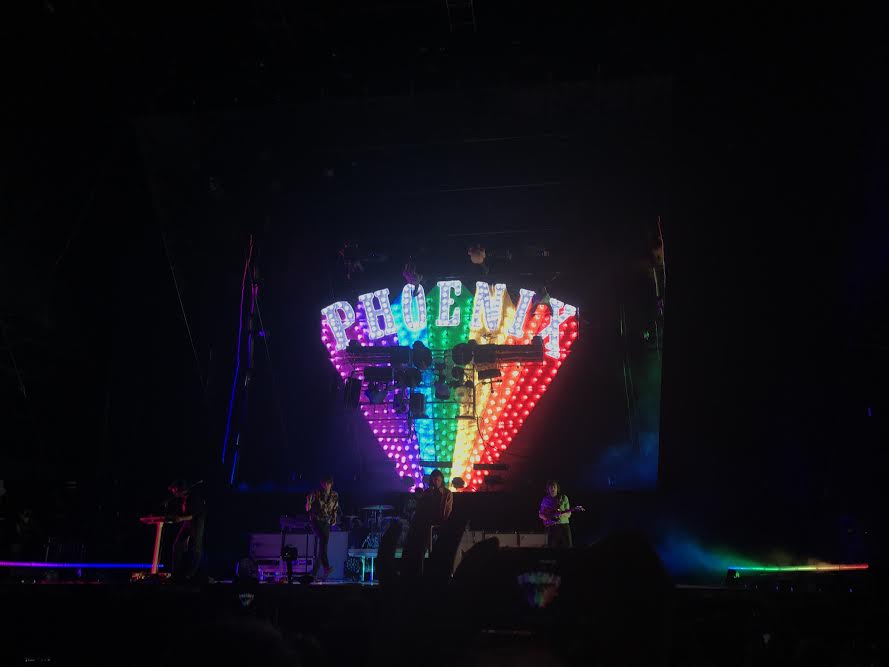 The French electropop band got lots of airplay with its 2009 album Wolfgang Amadeus Phoenix, landing spots in commercials, movies and television shows. The group’s prominence has declined since then, with their subsequent album, Bankrupt!, flying under the radar. For their first performance at a music festival in the United States, Phoenix killed it. The set ran a half-hour late, because the stage crew had to assemble a massive sheet of mirrors that hung above the stage, as well as a platform of multi-colored neon lights that the band stood on. But the performance did not disappoint. Phoenix alternated between Wolfgang Amadeus classics while throwing in tracks from other albums, never losing the crowd. After a double encore of a slow ballad and the international hit “1901,” singer Thomas Mars ran through the audience, climbed the sound tower and surfed the crowd, all while holding his microphone. The crowd jumped and danced alongside the band, making the air electric. [ML]