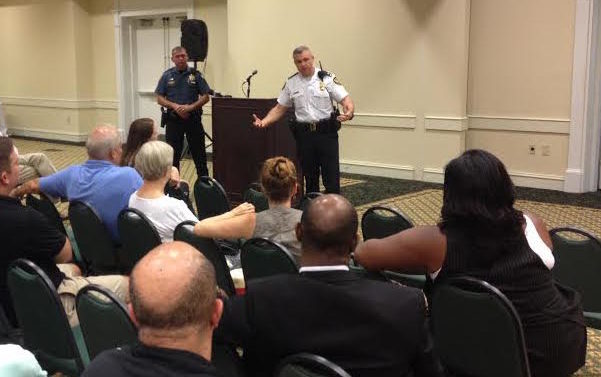 Athens-Clarke County police have identified a “person of interest” in the murder of 28-year-old Daniel Macias downtown early Saturday morning, they said Wednesday.

Police met with downtown business owners and the media Wednesday evening to update them on the investigation into the shooting of Macias, a Riverbend Parkway resident and Agua Linda server, near the ACC Courthouse at the intersection of Hancock Avenue and Jackson Street.

“We’ve got folks looking at every angle of this,” said Capt. Jerry Saulters, head of the department’s Criminal Investigations Division.

But there is still a lot police don’t know about what happened that morning.

“We don’t have a lot of information about where (Macias) was, where he was going,” Police Chief Scott Freeman said.

Authorities don’t believe Macias’ shooting was random, based on the number of shots fired at him.

“Historically, this type of violent crime is personal,” Saulters said.

This afternoon, police released a short video clip of a white man dressed in dark clothing walking alone past the courthouse parking deck on Hancock Avenue at 2:37 a.m. Saturday and said they want to speak with him.

Freeman said he is happy with his officers’ response. Twenty police officers converged on the area “within seconds” of hearing shots fired, Saulters said, and he noted that video showed 14 patrol cars passing by the area in the hour before the shooting.

“I don’t know what more we could do as police to have prevented this,” he said.

Freeman said he’s not stepping up patrols downtown in response to the shooting, saying that a greater police presence downtown could adversely affect businesses.

“Realistically, no one wants to live in a police state,” he said.