Tug is a new local band that, even in its relative infancy, is already one of the more exciting prospects for the future of Athens punk scene. The sort-of supergroup is made up of three longtime local musicians: former Tonda leader Dick Hunsinger, Art Contest’s Garrett Burke and Monsoon’s Emmett Cappi. Their set at the 40 Watt Friday could be best described as a mix of experimental noise rock, traditional hardcore and metal. Cappi, though mostly known as a supporting player in past projects, shined as he took on the role of lead singer. His energy was the kind of stuff you only see in a band’s earliest days, as if he has been waiting years to get this intensity out in the open. Hunsinger continues to be one of the best instrumental musicians in Athens; his guitar playing in Tug is as powerful as it has ever been. Burke’s math-rock drumming skills translate fine to Tug’s harsher sound. Tug’s ability to blend a large variety of genres into a sound this accessible and genuine calls to mind the likes of ambient noise-metal megastars Deafheaven. While Tug’s recent EP, Cover the Earth, is a decent introduction to the band’s sound, its live set is required listening. [Nathan Kerce]

Friday’s show on the Georgia Theatre main stage was an enthralling mix of punk swagger and bar-band sway, with Muuy Biien’s opening performance easily dominating the night. The band’s new material, which dips more into CBGB-era post-punk and funk-inflected territories than the band’s initial DIY hardcore recordings, was executed with unrivaled confidence, and singer Joshua Evans’ electrifying stage presence—tongue out and rife with jump kicks—captivates more and more the closer the band gets to releasing its forthcoming album. [Andy Barton] 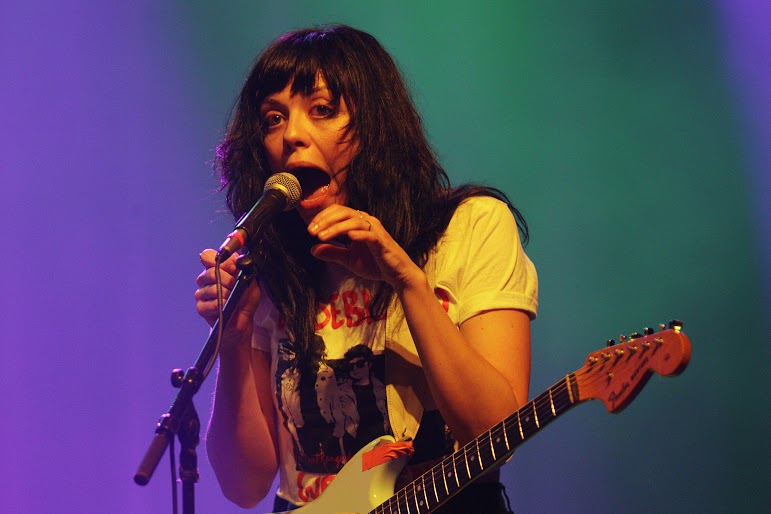 The Coathangers. The Coathangers! The Coathangers. When it comes to garage-rock, there’s something so damned essential about a trio. A duo means you’ve got to make a sacrifice somewhere, while in a four-piece, everyone’s got somewhere to hide (and five or more just feels decadent). Three is the way to go, and the Coathangers are a model of vigorous triangular efficiency, from each according to the entirety of her ability and then some, rumbling and rioting in every permutation as they traded instruments (the orthodox drums, guitar and bass, plus a dog toy). Toward the end of the set, security escorted out a mosher, who asked incredulously, “Is this not that kind of show?” To which the guard who had him by the elbow replied, “It’s not that kind of show.” But it totally was. [Adam Clair]

If you were one of the few who happened to catch Palace Doctor‘s set at Cine late Friday evening, you were treated to a solid smattering of the newly formed local group’s earworm-y garage-pop and a spot-on cover of one of the all-time great Beck songs, “Pay No Mind (Snoozer),” from ’94’s Mellow Gold. It was one of those great, unexpected AthFest moments that instantly puts a collective grin on the crowd’s face. [Gabe Vodicka] 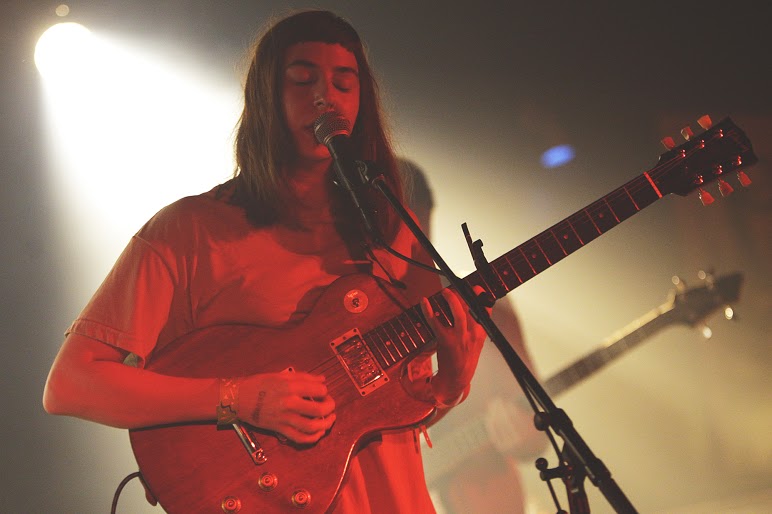 Mothers‘ set at the 40 Watt Friday was a typically excellent outing from the newly crowned Flagpole Athens Music Awards Artist of the Year winners. Though the set sounded familiar to anyone who has seen the band on its recent worldwide tour, there were a few surprises. It should be noted right off the bat that Mothers’ new bassist, Chris Goggans, already sounds like he has been playing with the band from the beginning—a seamless transition if there ever was one. In terms of notable moments, a cover of Glenn Frey’s classic “The Heat is On” from the Beverly Hills Cop soundtrack called to mind the band’s set-closing cover of Devo’s “Gut Feeling” from AthFest 2015, a moment that would define the group’s live energy moving forward and justify its decision to expand from Kristine Leschper’s solo act to a four-piece. The band also debuted some new material that sounded excellent, if not fully fleshed out. [NK] 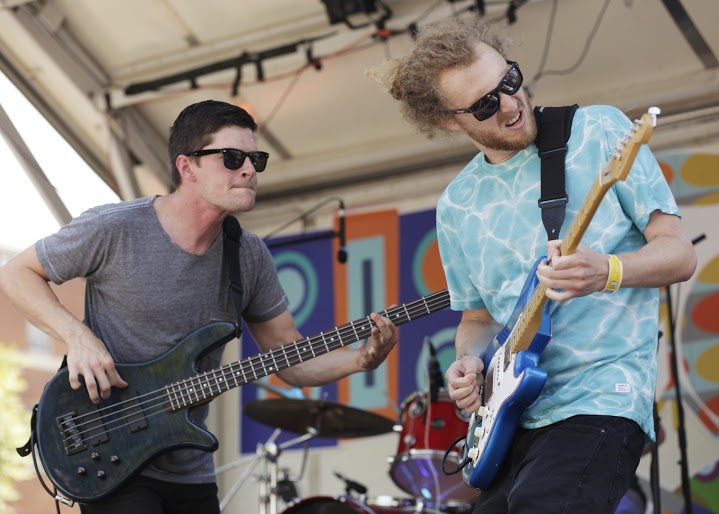 The unfortunately named Dank impressed the Pulaski Street stage crowd early Saturday afternoon. The audience was large but scattered, trying to avoid contact with the punishing rays of the sun. It would not be inaccurate to describe Dank as a jam band, though that is doing the group a slight disservice, as it intentionally seems to dip its toes into all kinds of genres. Elements of synth-pop, dance and funk were are all implemented into the band’s set, something the outdoor crowd seemed to appreciate. Dank, unlike a lot of jam bands, keeps a lot of its songs brief and bite-sized (relative to the 20-plus-minute single-song sessions you’ll see other bands go off on), leading to a level of accessibility it would’t otherwise have. The elephant in the room is that Dank’s lyrics are generic and borderline terrible at times, but big instrumentals are the true focus here, and they more than carry the weight, especially in an outdoor festival environment. [NK]

The Caledonia Lounge made a seamless transition from its Dirty Athens Day Party into Saturday evening’s Club Crawl, though a layer of muggy man-sweat lingered in the air as the 9 p.m. hour rolled around and Art Contest took the stage. The math-pop duo quickly whipped a moderately sized crowd into action. The band’s intricate guitar loops and frenetic rhythms continue to impress; with its Hella-on-uppers vibes, Art Contest has established itself as one of Athens’ must-see live acts. [GV] 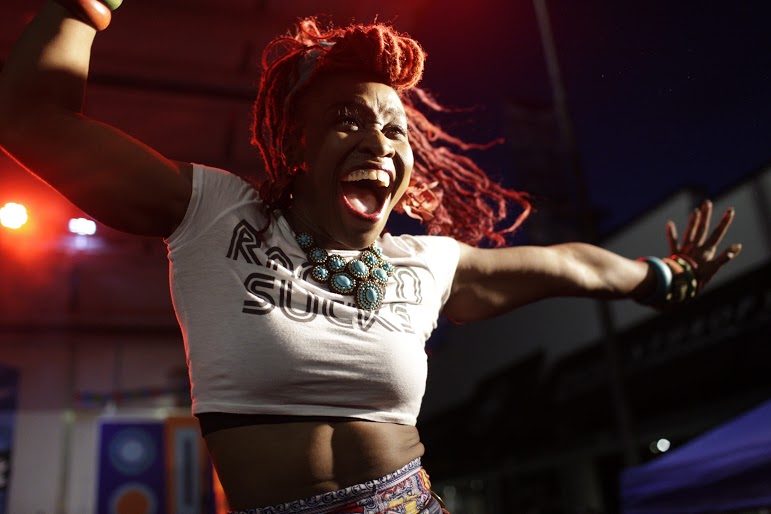 Whether you were familiar with their back catalog or not, legendary alt-hip-hop group Arrested Development’s headlining set at the Pulaski Street stage Saturday night was one of the most energetic and exciting sets that stage has seen in years. The majority of AthFest on Saturday was plagued by brutal heat, reaching up to 99 degrees at several points throughout the day. People were tired, sweaty and sick from being out in the sun all day, but AD still managed to get the crowd hype for a 90-minute set. The group ran through classic hits like “Tennessee” and “People Everyday,” as well as a variety of new songs, a few freestyles and a medley of ’90s hip hop covers. The crowd seemed at best mildly familiar with most of the band’s material, but it didn’t really matter, because no matter what the group were playing, its crowd control was top notch, keeping everyone engaged, happy and jumping. It’s not easy to put a smile on someone’s face after they’ve spent all day in the sweltering summer heat, but anyone who was there to witness AD’s engaging, positive hip hop was sent home grinning ear-to-ear. [NK]

As the temperature finally began to drop Saturday night, the outdoor setting of Little Kings became the perfect match for each of its four performers. Neighbor Lady’s understated accompaniment pushed singer Emily Braden’s stellar, reverb-laden vocals to the front of the mix. Moths’ set was relatively low-key, with a seated Jacob Morris strumming his acoustic guitar from the steps, but provided plenty of texture to get lost in. Wanda‘s performance, the group’s third in three nights, was the highlight of the evening. The band’s winsome attitude, dreamy soundscapes and singer Avery Draut’s magical pipes continue to build anticipation for the day we get the pleasure of a record to listen to over and over again. Consensus for the night was, “Damn, these ladies can sing.” [AB]

Eureka California’s brief set at the HHBTM showcase at The World Famous late Saturday was what anyone who is familiar with the duo has come to expect at this point. With zero stage banter or even the occasional pause to take a breath, Jake Ward and Marie Uhler ran through a 20-minute set of rip-roaring pop-punk. It felt like there should have been a mosh pit or some sort of crowd movement, but thanks to The World Famous’ tight constraints, EC played to a mostly still crowd. The imagery of them blasting their brand of poppy garage-punk to a room full of people politely nodding is funny in retrospect, but it did feel like a little bit of a downer in the moment. [NK]

Black Lips is a legendary live band at this point, but it’s hard to blame the late night AthFest crowd for being a little sluggish in the 40 Watt’s perseverant air conditioning after a long, hot day that pushed the mercury towards the triple-digit mark. Bassist Jared Swilley managed to work in a well-executed stage dive, and “Bad Kids” got the college kids moving a little, but overall, the set had the feel of a radio alarm clock barking out too-early, too-loud Top 40 when you just want to sleep in. That’s no slight to the band, whose hit-filled set was airtight and energeticâ€•they just seemed to have more energy than the majority of their audience. A parabola of toilet paper sailed over the 40 Watt’s dangling Christmas lights early in the set and then again toward the very end, but otherwise, the crowd seemed as staid as it had for Mothers’ much more sedated set 24 hours earlier. The veteran Atlanta punkers brought it with most of their usual gusto, but AthFest’s night owls couldn’t quite keep up. [AC] 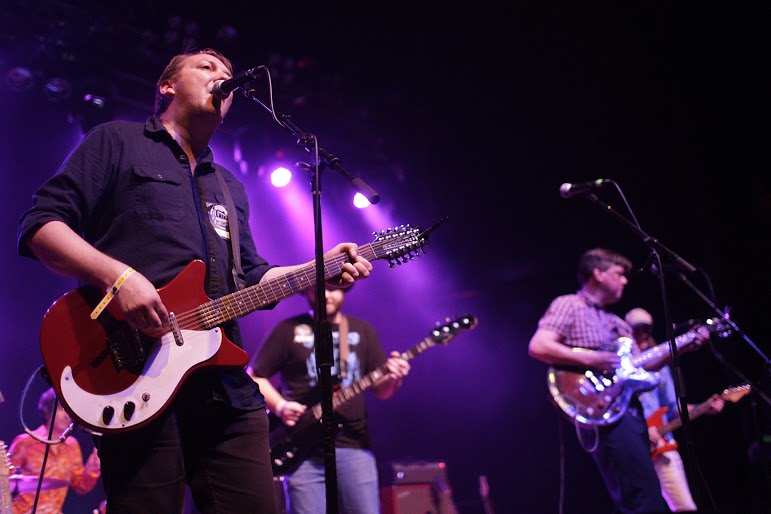 Elf Power played a solid set to an unfortunately sparse crowd at the Georgia Theatre past midnight on Saturday. The floor was nearly empty by the time the band took the stage, but thankfully more people started to pour in as time went on. The group powered through a long, solid set of tunes, with Andrew Rieger politely thanking the crowd with a “Thanks, y’all” after every song. Highlights included a live rendition of the band’s cover of The Dwarves’ cough-syrup anthem “Drug Store,” as well as a touching tribute to The Glands’ Ross Shapiro, who passed away earlier this year. While it’s unfortunate more people weren’t there, Elf Power played like the Georgia Theatre was a packed house. If you weren’t there, you missed out. [NK] 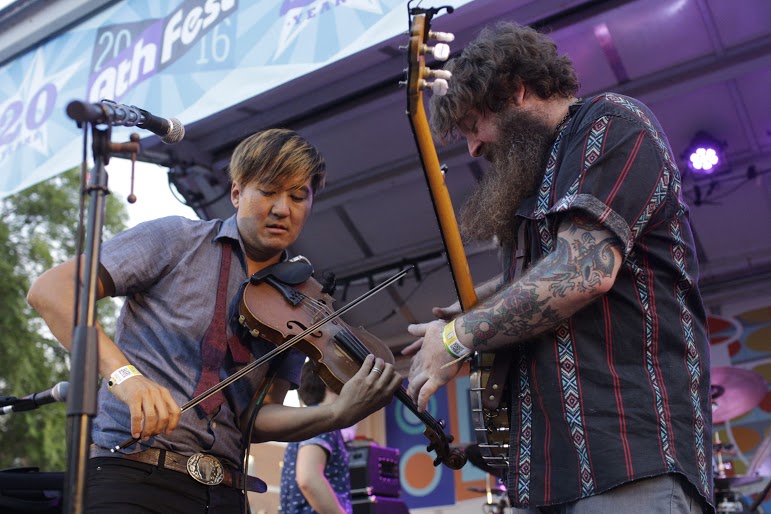 As the sun set slowly behind the AthFest main stage, mercifully pulling the oppressive temperature down with it, Kishi Bashi closed out the festival with an exclamation point, punctuating a musically diverse weekend with a fairly eclectic set of his own that featured songs he played on the same stage two years prior, as well as plenty of new material (alternately funky and bluesy relative to previous stuff, with all of Kishi Bashi’s art-pop hallmarks and plenty of falsetto), along with typically varied instrumentation and a fellow in a steak costume. Kishi Bashi and his slick backing band (and often a looping pedal) built up intricate soundscapes robust enough to survive in an outdoor setting, swelling and billowing before blowing away like a sand mandala on the first real breeze of the weekend. Though his red bowtie hung loose from his collar for most of the set (he tied it on mid-song and then untied it by the end of the same tune), Kishi Bashi’s commanding performance wrapped AthFest up in a neat bow and kept a tired, sweaty crowd on its toes, getting lost in the layers emanating from Kishi Bashi and his band’s sonic house of mirrors. [AC]