From Sep. 18–Nov. 6, Flagpole photo intern Randy Schafer shadowed the members of local band Swamp, in an attempt to document what it’s like to be in a band in Athens while simultaneously attending college at UGA.

Previously: Life on the Stage 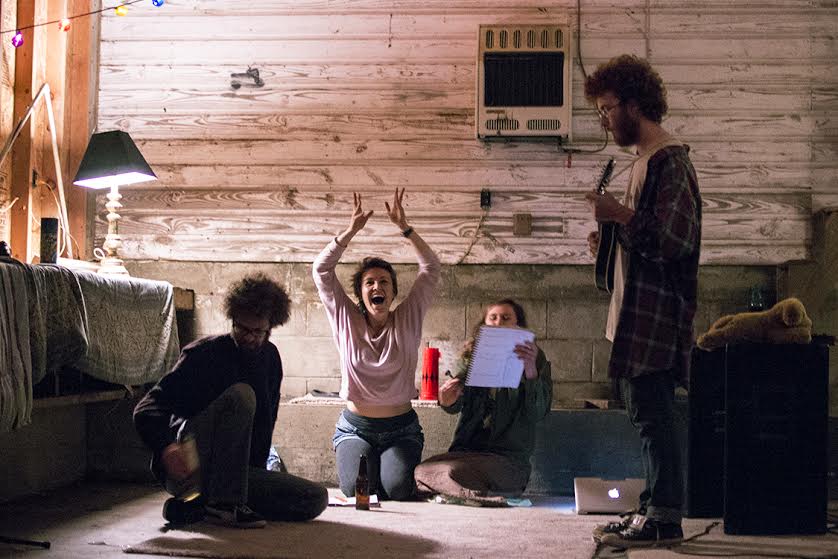 On All Hallows Eve, Owen Hunt (left) sets down his beer, as Maya Rae (center-left) practices her avant-garde performance with Lulu Lacy (center-right) and Tommy Weigle (right) plucks the strings of his unplugged guitar in the barn and future stage of Swamp’s Halloween House Show.

Halloween is usually the time for costumes and candy, tall-boys and tail-shakers, horror movies and late-night debauchery, with costumes often painted on for weeks. For Swamp, the list includes an industrial-sized container of mayonnaise and some alcohol-soaked chicken heads and testicles.

Charlie Bond, a 20-year-old sophomore biological engineering major at the University of Georgia, lives on two-acres of relatively undeveloped land, sandwiched between farms and student neighborhoods. He has a coop with two chickens, five ducks, a cat, a dog and a snake. After a couple “meat chickens” died of natural causes, Bond froze the heads, testicles and a trachea and decided to use them as Halloween decorations, submerging the heads in Mason jars filled with isopropyl alcohol. 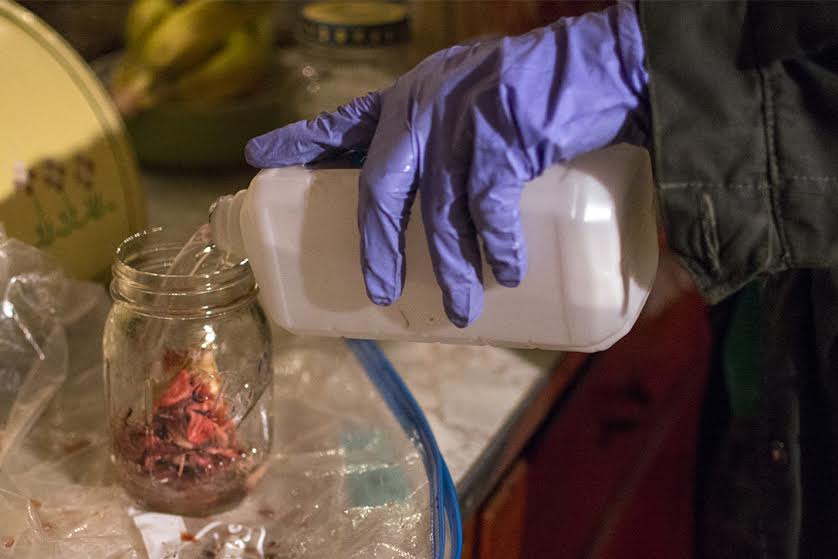 Filling two jars with chicken heads and parts, Bond seals the containers and preps them for decorating the barn.

The decor of the Swamp Halloween show is like a traveling countryside horror-show meets Bed Bath & Beyond and “Pee-Wee’s Playhouse” in a DIY, Southern freak-show-styled operating room with cement floors. For the members of Swamp, especially Bond, putting together and playing a Halloween house show is a blast.  “I feel like it’s easier to play with a costume on,” Tommy Weigle says. 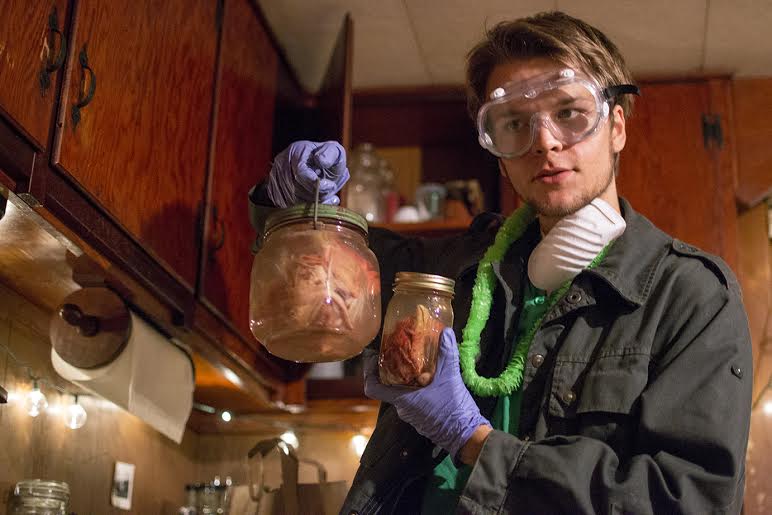 Filling two jars with chicken heads and parts, Bond seals the containers and preps them for decorating the barn. 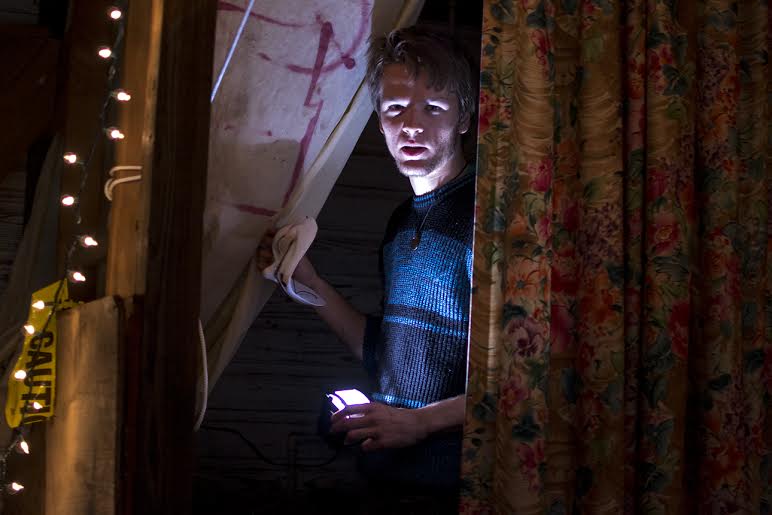 After placing additional decorations and lights, Bond continues to organize the barn, holding onto an LED head-light while peering out of a curtain. 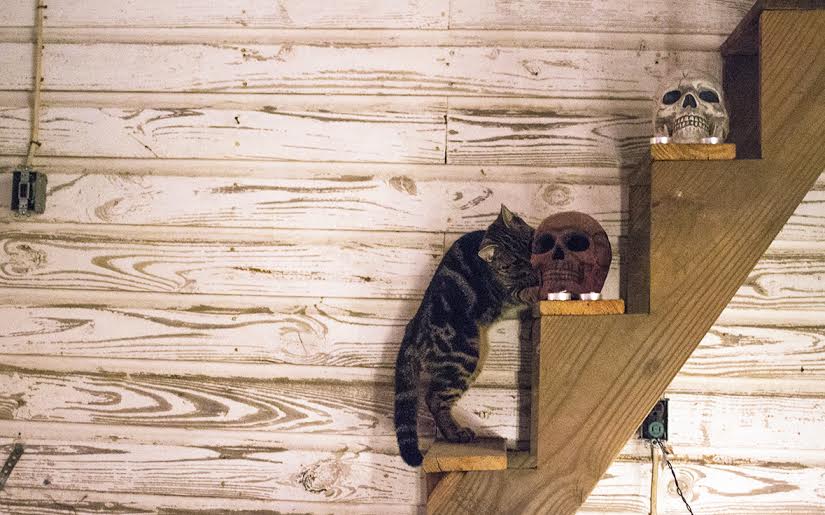 Bond’s cat, Pickles, plays with one of the fake skulls decorated on the steps that lead up to a small 2nd floor of the barn. 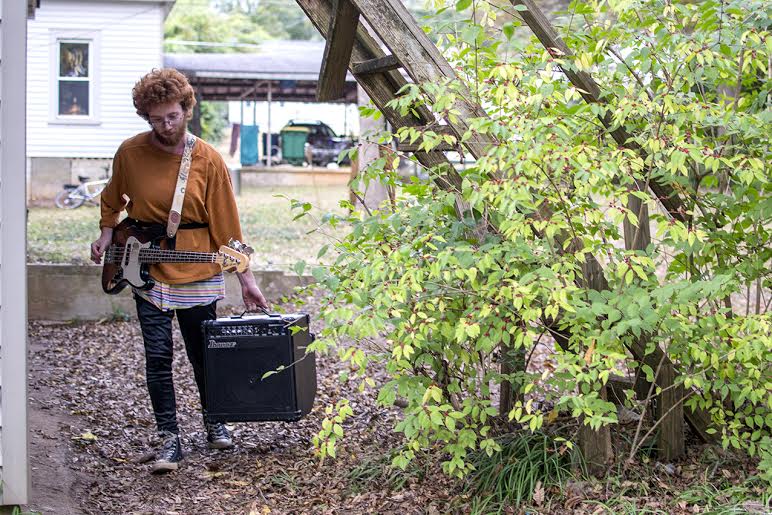 Weigle walks outside, passing under a case of withered stairs, while transferring the bass guitar and amp from the practice space into the barn for the Halloween show. 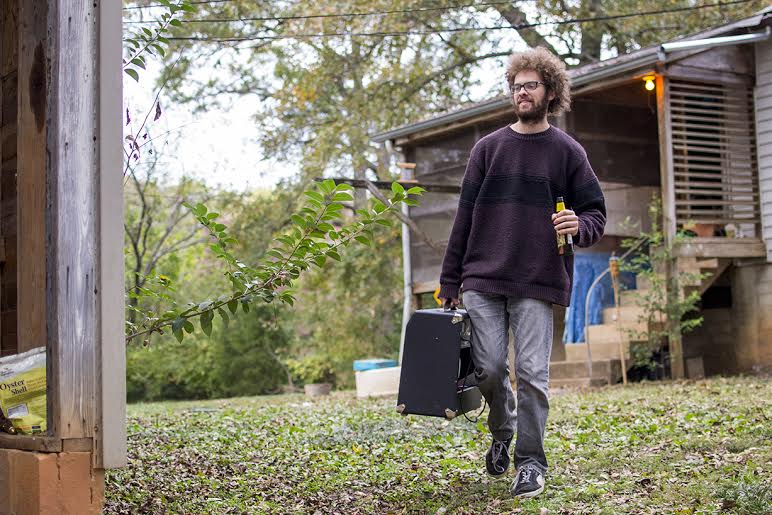 Following Weigle, with beer in-hand, Hunt carries a guitar amp outside from the practice space on his way to the barn to set up the stage.

After setting up most of the decorations and musical equipment, the band members split up to have fun, while their friends began to show up and help decorate or set up camp. Not wanting people to drink and drive, Bond allows friends to set up tents to crawl into at the end of the night after the show ends. While Weigle takes care of his own affairs, Bond and Hunt enjoy goofing around on the property.

“One time me and Lulu were at the tractor supply store getting some chicken feed, and we saw this little pedal-cart,” Bond said. “And you have one of those moments where you’re a child in an adult body with adult money, so we bought this freaking go-kart… and on Halloween, me and Owen were just flying down this hill in a little cart.” 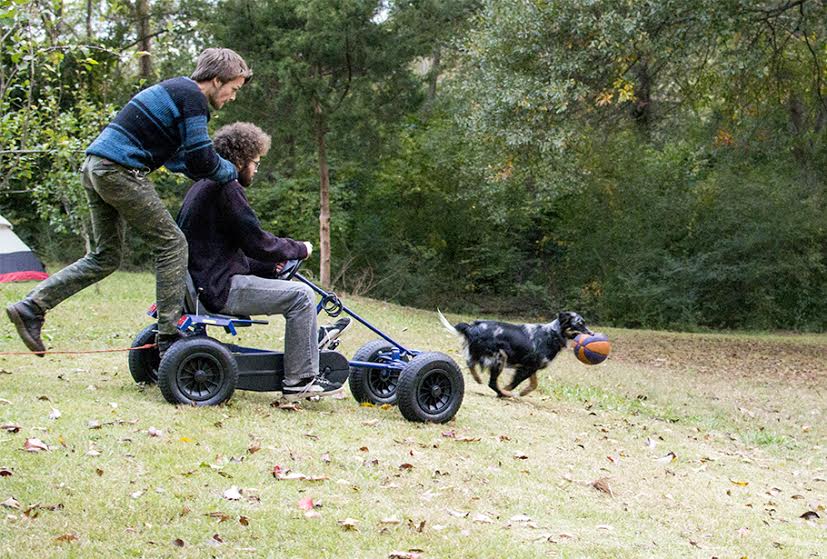 Bond runs, pushing for acceleration as he jumps on a four-wheeled pedal-cart with Hunt as they race down a hill, while Bond’s dog Theo chases them with a basketball in his mouth.

Tacking up extra lights with some tapestries and skulls, the barn is transformed once the sun goes down, as it radiates with an orange hue. 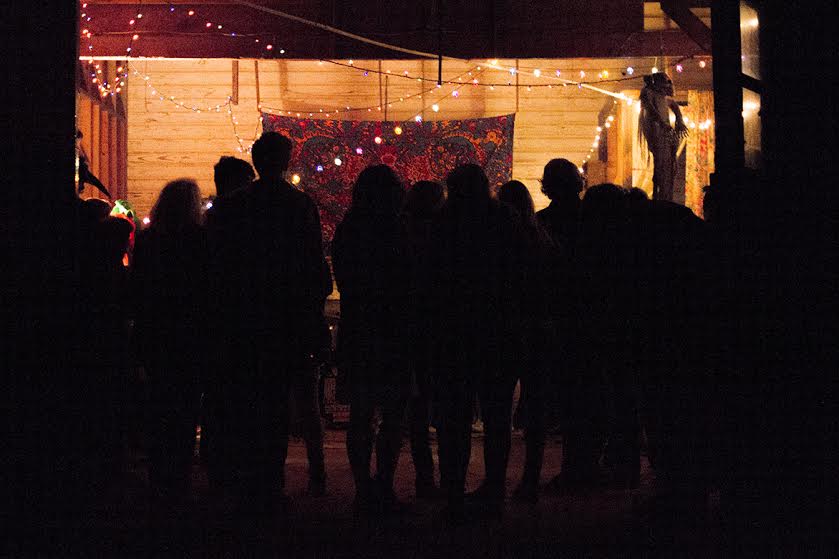 Waiting to start the show after the sun goes down, more people assemble inside the barn, as Swamp’s set time grows near. 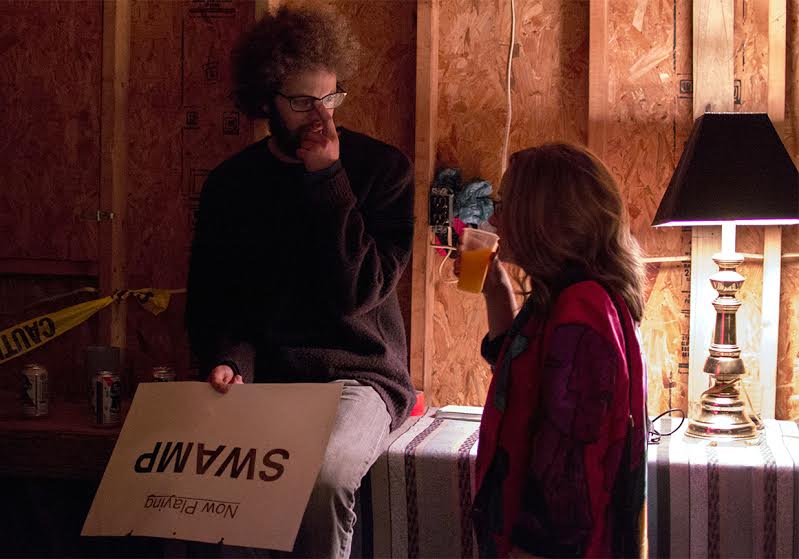 Hunt sits on a counter holding his band’s “Now Playing” sign as he talks with a girl inside the barn, moments before Swamp goes onstage. 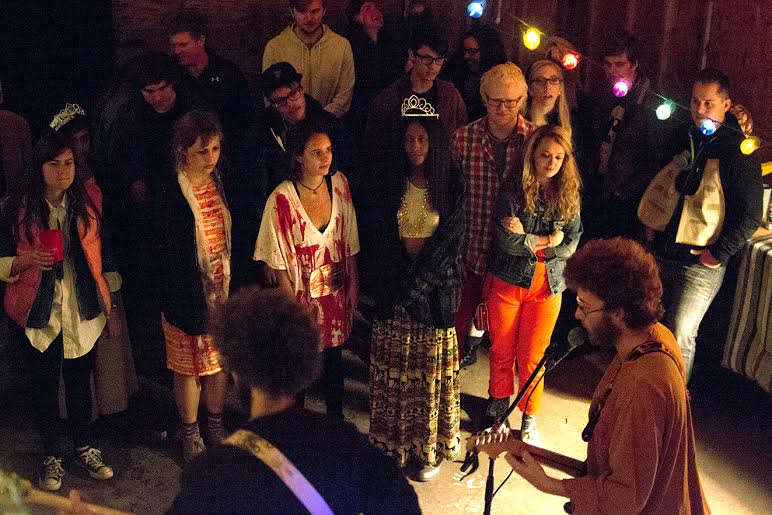 Swamp performs for a sizable audience during its Halloween House Show, with 30–40 people filling the barn, with others outside by the gazebo and keg or smoking cigarettes by the barn entrance.

Part sandwich, part performance art and part white, sticky mess, Weigle performs his “Mayonnaise Man” sketch at the end of the show. “With the mayonnaise thing, we had no idea how that was going to go,” Weigle said. “I’m glad it went well and people got into it—it could have been horrible.” 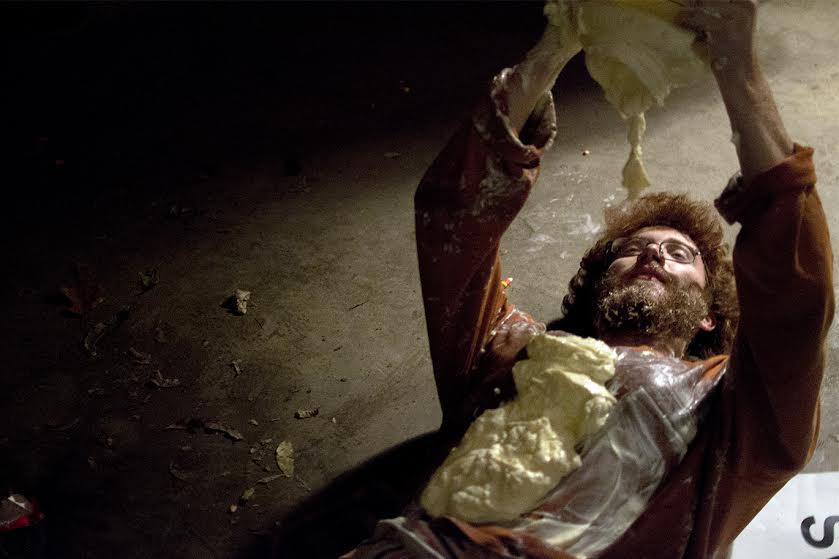 As the show finale, Weigle lays on the floor with a gallon-size container of mayonnaise. He squeezes a large blob of mayo onto his chest, rubbing it into his clothes as the crowd gasps and laughs. 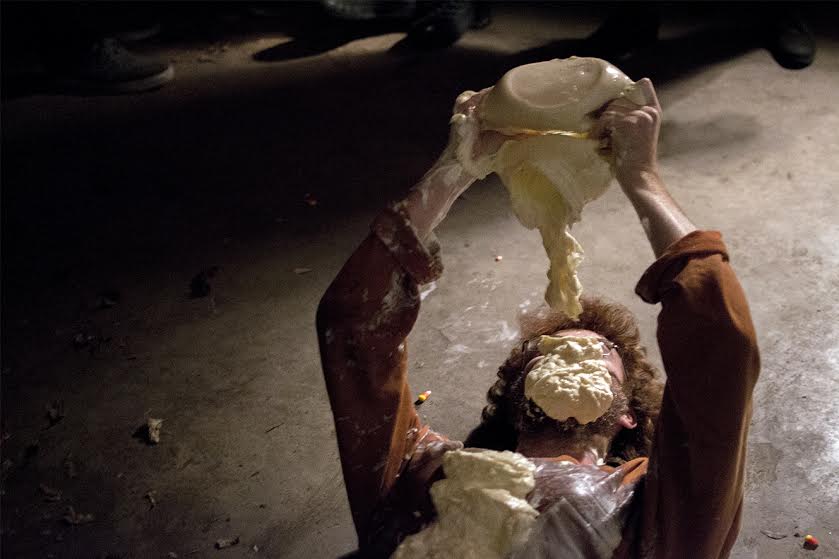 Weigle squeezes the container harder until the mayonnaise oozes out, piling onto his face a white, creamy blob. 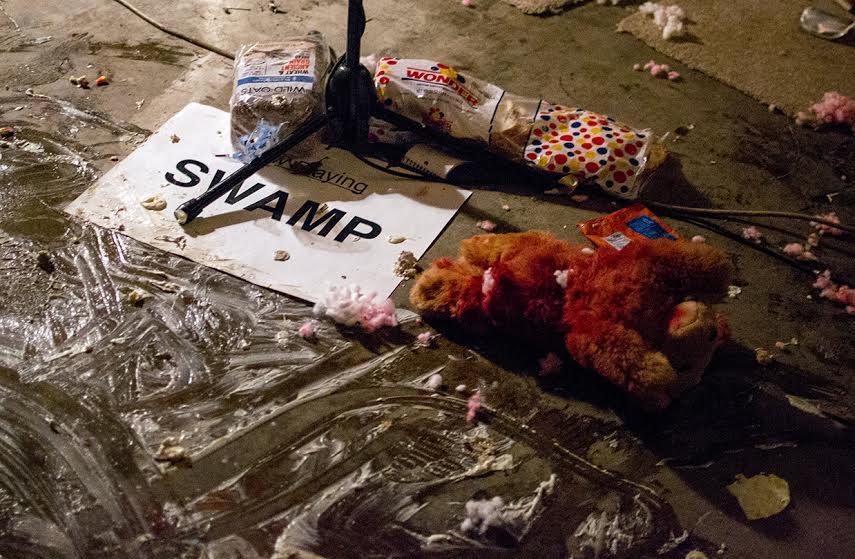 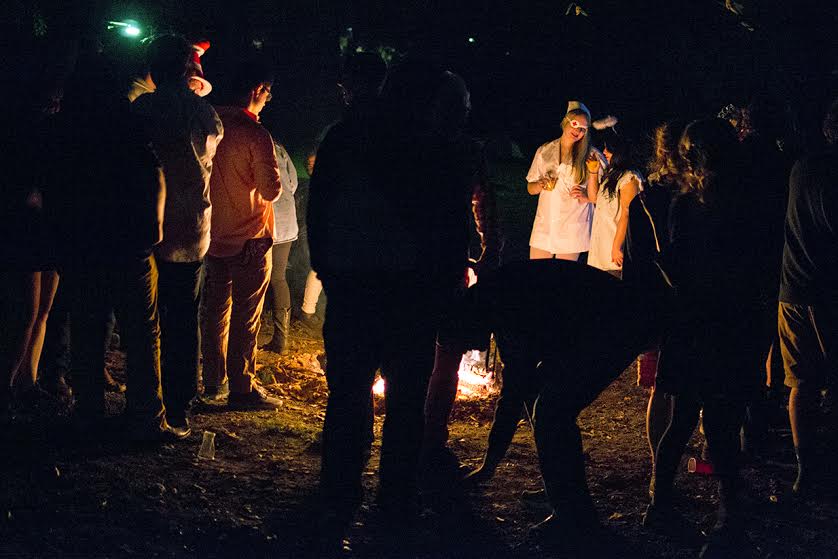 At the end of the night, friends and audience members gather around the fire pit with members of Swamp and the opening band, Minor Wiley.