Even After Graduation, Carden Wyckoff Fights for Arch Access 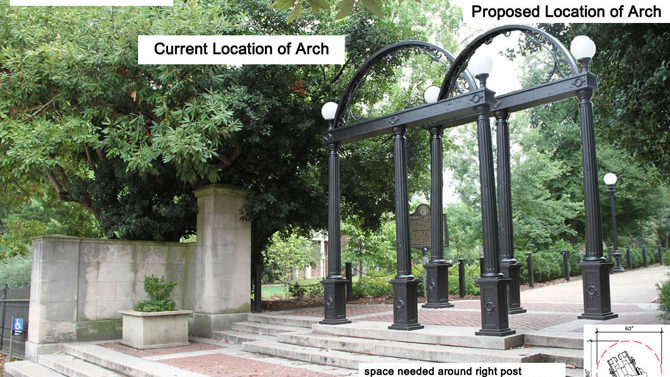 Since she entered the University of Georgia, Carden Wyckoff has been fighting to extend to the handicapped the time-honored tradition of going under the Arch after graduation.

When Wyckoff, who suffers from muscular dystrophy, graduated last spring, she reluctantly settled for walking on a ramp alongside the Arch that UGA agreed to install after she and other disabled students circulated a petition that garnered thousands of signatures and Facebook likes. In October, she took the fight a step further, filing a complaint with the U.S. Justice Department alleging that the Arch’s stairs violate the Americans with Disabilities Act.

“We’re saying that in Title II of the ADA, a public entity may not deny its programs, activities [or] services because its facilities are inaccessible,’” Wyckoff said. “[When] a facility is altered, since 1992, it is required to be deemed accessible and made accessible for people with mobility issues.” 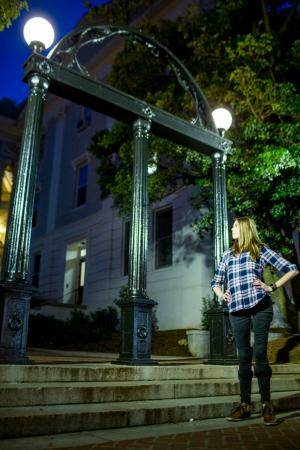 The Arch is not only one of the university’s most recognized symbols, but it is considered, as the late Khaled Alsafadi, a handicapped student and activist, once put it, the literal and figurative transition from the campus into the community. “It’s definitely a symbol of the school and the history of the university,” said Max Johnson, an able-bodied student. “I’m not going to touch it until I graduate, and hopefully, if I get into vet school here, I probably won’t even touch [the Arch] until I graduate from there, honestly.”

Two years ago, Wyckoff, Alsafadi and Marquise Lane began to appeal through UGA’s chain of command, culminating in President Jere Morehead’s offer to construct a temporary ramp for spring 2014 commencement. The ramp was made permanent this summer to improve access to the nearby bus stop. “Even though it’s not exactly what we asked for, it’s a step in the right direction,” said Lane, a senior who is impaired by cerebral palsy and uses a walker. “But I would love to walk under the Arch like everybody else.”

In November 2014, Wyckoff and longtime family friend Rose Caplan met with UGA Equal Opportunity Office Director Janyce Dawkins and filed a formal complaint. They had two issues: the quarter-mile walk to the Arch before the ramp was installed at the Broad Street entrance to North Campus, and making the Arch permanently accessible. “Carden isn’t the type of person to complain,” Caplan said. “She’s one of the sweetest people I know.”

But Wyckoff didn’t feel like a full-fledged member of the UGA community without the ability to walk under the Arch 365 days a year. “UGA is better than temporary,” she wrote for an article about muscular-disease awareness for the Muscular Dystrophy Association website. “The issue here does not regard ADA compliance. According to the ADA, access into North Campus is available… This is about creating equal access at all times.”

Even with the ramp now permanently in place, some students are unable to cross under the Arch. The distance from the Arch to the first of six steps in front of it is three inches—equal to the width of a cell phone screen. That’s not enough space for a person in a wheelchair or on crutches to maneuver. “The tradition that is over a century old states that if you have not graduated, you do not pass under the Arch,” Wyckoff said. “It’s a rite of passage. Those stairs limit people with mobility issues, people in wheelchairs, walkers or really any walking problem.” 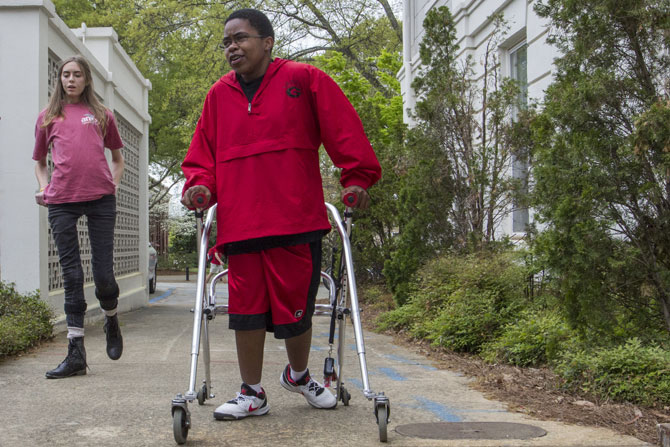 Wyckoff and Marquise Lane, a senior who’s worked with her on Arch accessibility issues.

Starting last May, the university installed a temporary platform that’s wide enough for wheelchairs to maneuver so that spring graduates can have their pictures taken under the Arch. But the platform isn’t constructed for summer or fall ceremonies.

University officials maintain that the Arch does not have to meet ADA standards because it’s not a “program, activity or service” covered by the ADA; it has historical significance, which exempts the structure from compliance; and the ramp and temporary platform are enough. UGA opted not to move the Arch back to accommodate the handicapped when it was repaired and repainted over the summer.

“[T]his summer, the University constructed a ramp, at the cost of approximately $100,000, from the North Campus bus stop on Broad Street to the platform behind the Arch,” Janice Gleason, UGA’s interim director of communications, wrote in an email to Flagpole. “This measure has significantly improved access to North Campus for people with mobility impairments, and it also has provided a more accessible route to the Arch. In addition, the university has provided a temporary ramp for photographs following the last two spring commencement ceremonies.”

Wyckoff and Caplan appealed the Equal Opportunity Office decision to President Jere Morehead, then to the University System of Georgia Board of Regents. In May, the BOR found no discrimination. But the university never submitted a report on the historical significance of the Arch, according to Caplan, who provided email correspondence between Wyckoff and Karen Anderson-Cordova, the program manager of environmental review and preservation planning for the BOR. Such a report would reveal that the Arch has been moved in the past—for example, it was pushed back eight feet in 1964.

BOR Vice Chancellor for Legal Affairs Nels Peterson declined to comment. “I don’t think I’m really in a position to speak about that,” he told Flagpole. “The appellate file for review, I can’t speak to that.”

In her latest complaint filed with the DOJ on Oct. 19, Wyckoff is seeking to have the Arch moved back five feet so people in wheelchairs and on crutches can maneuver through it to the ramp leading down to the Broad Street sidewalk. She, Caplan, Lane and her mother, Christiane, are still waiting to hear if the DOJ will act on the complaint. “We’re not even sure it will make its way to court,” said Christiane Wyckoff. “It might be that they decide to, or they may say it’s OK, you never know, but it is possible that they will never look at it.”