Video: Misfortune Leads the Sons of Sawdust Back to the Past and Back from the Brink 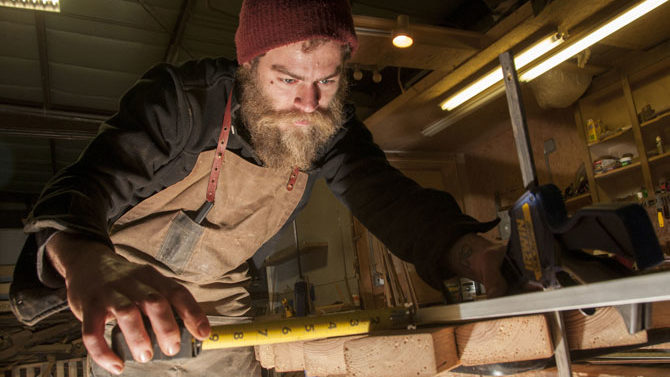 Click here for a photo gallery of the Sons of Sawdust converting reclaimed wood from an old barn into a table for the Athens restaurant Goodie Two Shoes.

There are small, defining moments in people’s lives that can either drive the nails into their coffins, or cause them to rise up and build a new foundation. For Matt and Ben Hobbs, a pair of woodworking brothers also known as the Sons of Sawdust, their collective moments of financial and physical strife in the past rekindled a dormant passion—one whose roots began to sprout at an early age, guided by their grandfather.

In 2012, a construction knee injury left Ben Hobbs unemployed and broke. Matt and his wife, Shayna, lost their Tennessee-based wedding photography business during the recession.

Shortly after Ben’s injury, Matt made Shayna a homemade farm table as a gift. Soon, the idea of selling the table on Craigslist was the catalyst of the Hobbs’ venture into woodworking as a profession.

“So our business was formed out of a knee injury,” Ben says. “And I got really depressed, because that was my only source of income. And Matt, being the good brother he is, sits down with me and says, ‘How can we make some money for you? You don’t have to despair, there is a solution out there.’”

Now that they own a warehouse in Watkinsville, the Athens brothers are working to keep the legacy of their grandfather Cecil T. Hall’s woodworking alive. They use Hall’s tools on each piece of furniture they create.

“When I think about Pa, I always think about being in his workshop,” Ben says. “And everything he’s taught us, we carry on.”

They’ve managed to harness that integrity into a thriving business, with orders for tables, bed frames and other pieces of furniture from local residents and businesses around town backed up for several months.

One reason the Hobbs brothers prefer using reclaimed wood is the authenticity and storyline attached to the longleaf pine used to build these now dilapidated locations. Such wood is only found in national forests in the 21 Century.

Using wood with weathered scars and nail holes, aged from years of use, helps add detail not found on the beams shelved in stores. Many times, these old buildings the brothers find are falling apart, with a history that often diminishes, like buildings the brothers recently visited in Comer in late February.

“There’s a lot of intentional thought that goes into this process,” Ben says. “If you’re thinking about a table when you’re building it, and thinking positive thoughts, and imagining a family sitting around it laughing and having fun, playing games, I feel like the product is going to have a different vibe when it’s being built.”