Swamp Photo Essay, Part One: Life On the Stage

“At a venue, generally the stage is above the audience,” says Tommy Weigle, guitarist and vocalist for local indie rock three-piece Swamp. “But at a house show, everyone is on the same level, so it’s [easier] to interact with people in the audience. One, because we probably know them better personally, and two, because we can run into them and stuff, which is fun.”

Performing music in front of a crowd of people provides its own challenges, routines and expectations—and its own rewards, far beyond the gratification of a good jam behind closed doors. At first, though, it can be daunting.

“I know both Owen [Hunt] and I used to be really, really shy about things,” says Weigle. “So, playing live, a lot of the time, was… not necessarily like, ‘Let’s get this over with’… Sometimes it’s nice to get out of a familiar environment and try something new—but sometimes it’s terrifying.”

In addition to conquering the live music beast, the members of Swamp have to manage school responsibilities, finances, maneuvering around each other’s schedules and planning what gigs to play when and where.

From Sep. 18–Nov. 6, Flagpole photo intern Randy Schafer shadowed the members of Swamp, to document what it’s like to be in a band in Athens while simultaneously attending college at UGA. 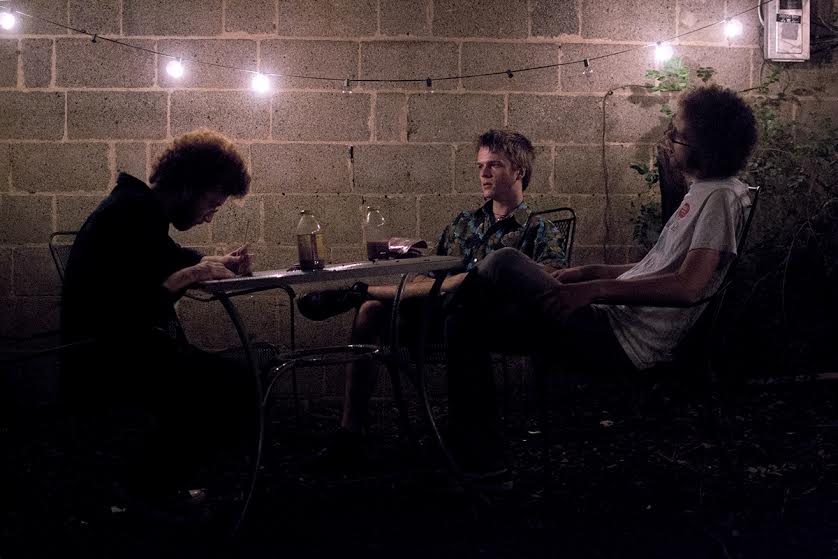 “Just with my personality, I don’t have a drive to go out and seek interaction with people,” Bond says. “Waiting for us to play, or waiting for another band to play, my impulse is just to sit in the corner by myself, or hang out with one or two people I already know.” 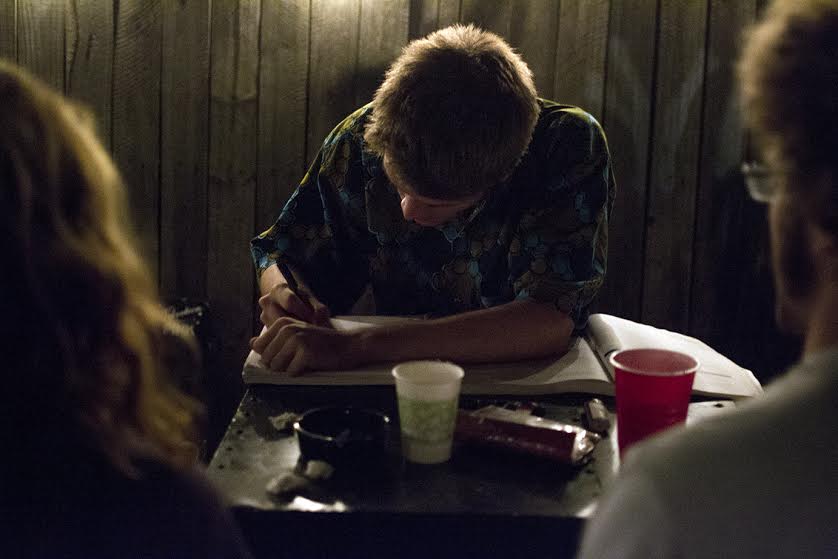 With a Physics test at 8 a.m., eight hours from the start of his band’s set-time, Bond (center), is forced to study for his test before Swamp goes on stage at Caledonia, while his girlfriend Lulu Lacy (left) and bandmate Hunt (right) converse on the back patio in front of him.

“I’ve twice had a physics test the morning after a show where we’re playing at midnight,” Bond says. “I have a lot of classes where it’s rigorous hard science.”

One of the hardest parts for these three college students is finding a way to make money. But the young musicians say it is not their first priority. Given that a majority of Swamp’s shows are either free to the public or house parties with no cover, band members say they play for the love of music.

“One of the most important things we’re constantly trying to do is push ourselves forward,” says Weigle. “I feel like the way music gets better is if someone is trying to experiment and being more creative with it.”

Hunt adds that he fears the day the band tries to recycle old ideas. “This band will be dead when we stop coming up with new ideas,” he says, “and we stop being surprised with what we’re doing.” 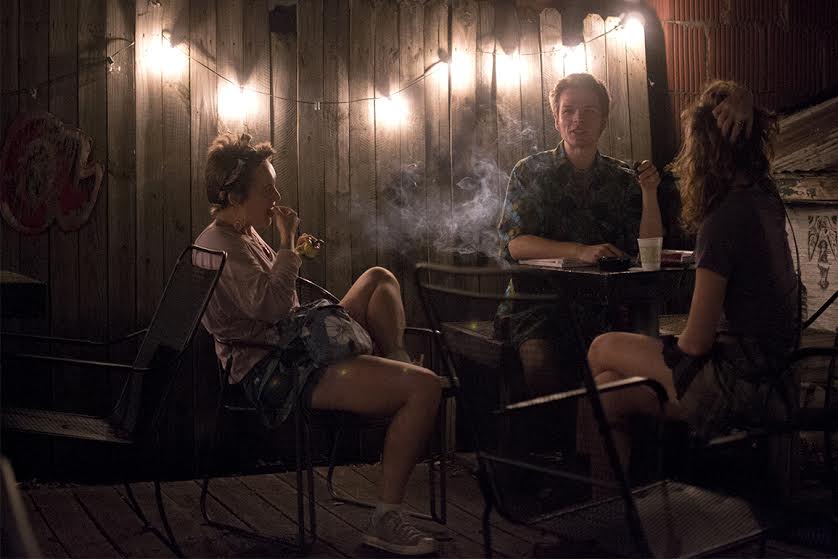 Distracted from his studying, Bond (center), smokes tobacco from his pipe while talking with his girlfriend Lulu Lacy (right), and her friend Maya Rae (left). 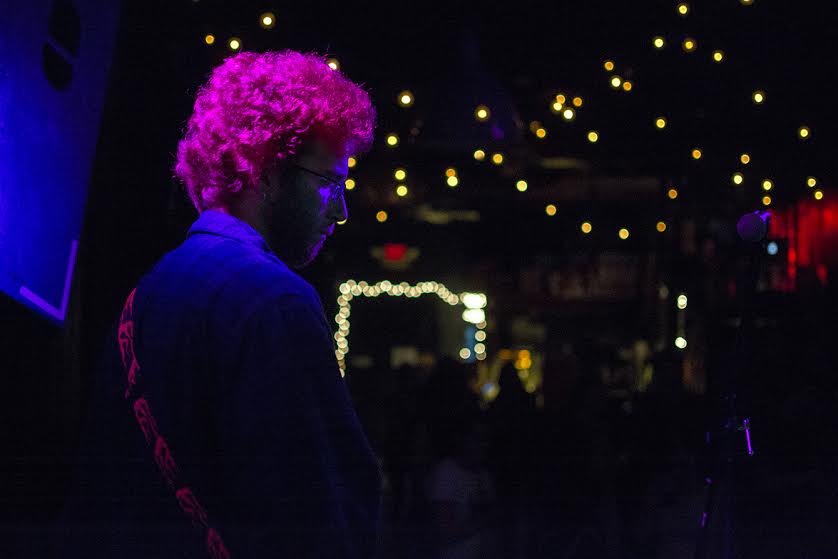 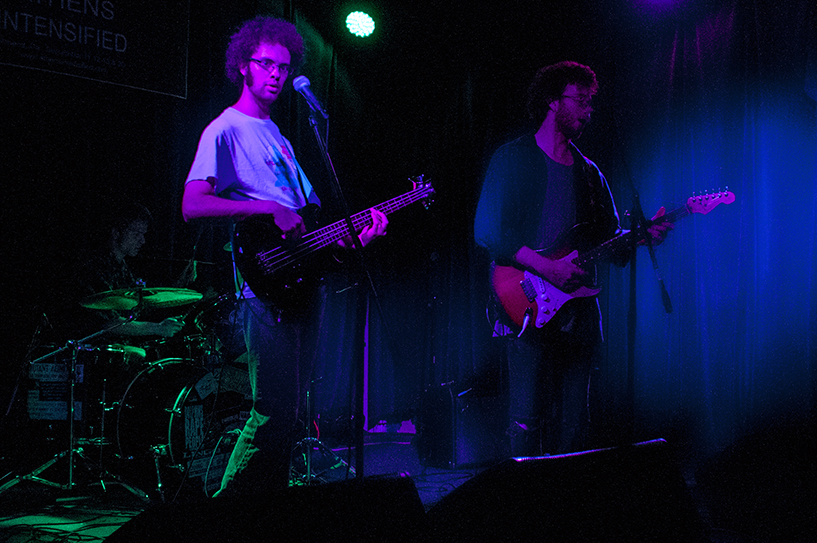 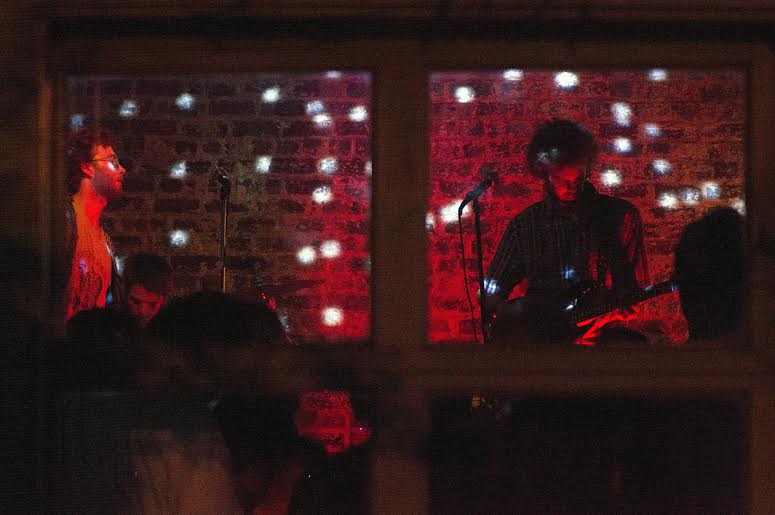 Swamp performs at Go Bar in September, three days after its show at Caledonia Lounge. 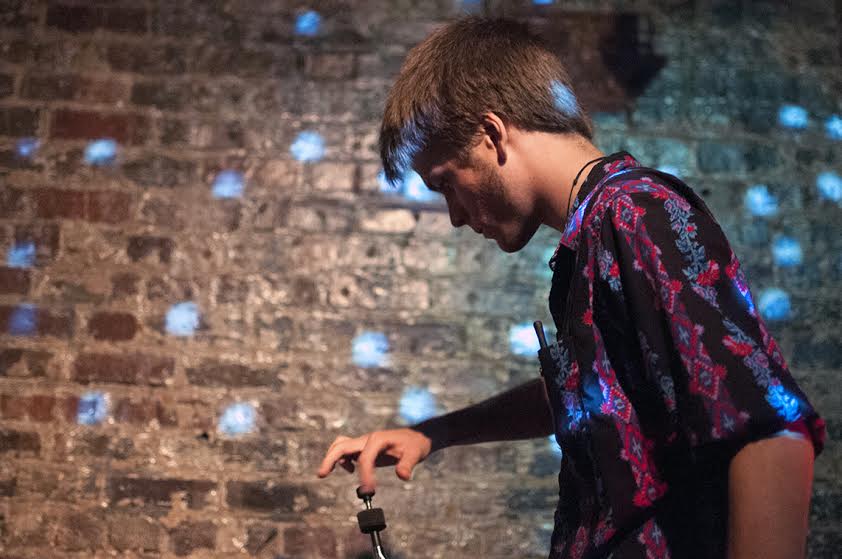 Bond breaks down his drum set, removing his cymbals from the stands after performing at Go Bar. 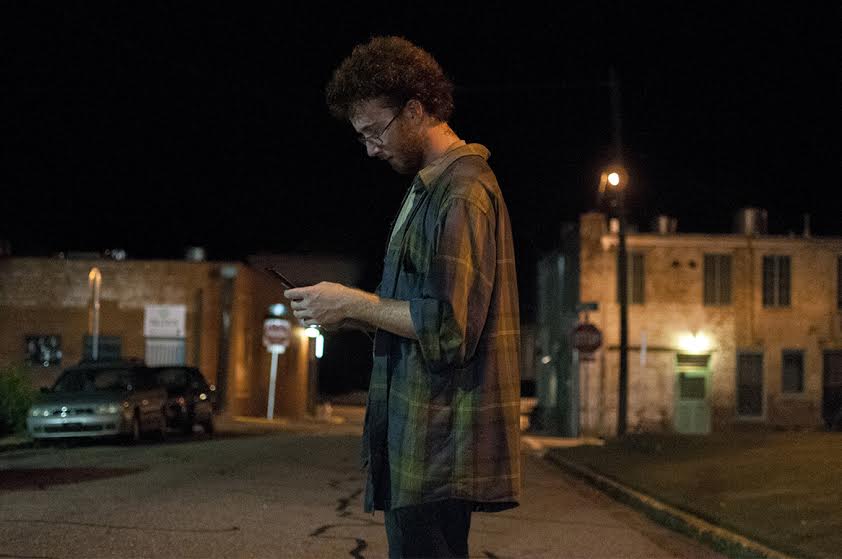 Still filled with energy, and enjoying his after-show performance-high, Weigle begins calling friends to see where he will enjoy the rest of his night . 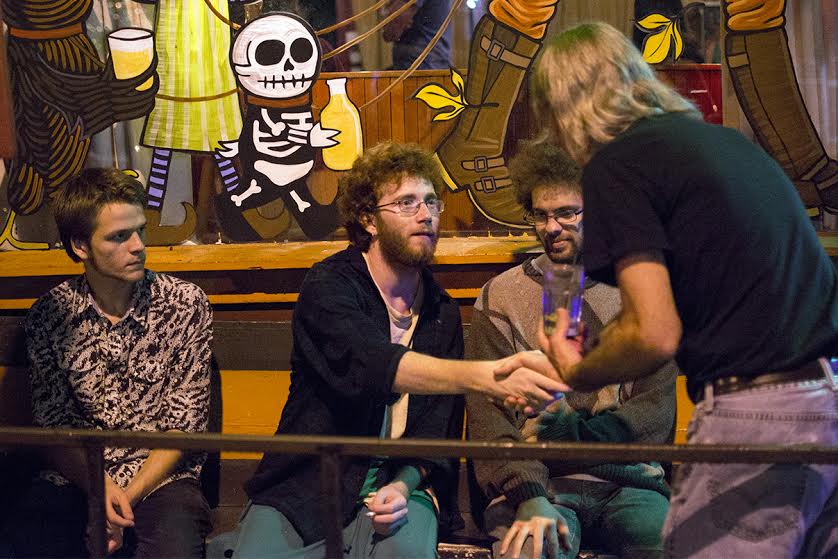 Before performing at Flicker, the band sits outside on a bench and talks with bar patrons. Weigle (center), shakes the hand of a patron asking him about Swamp’s musical sound, and thanks him for the conversation. 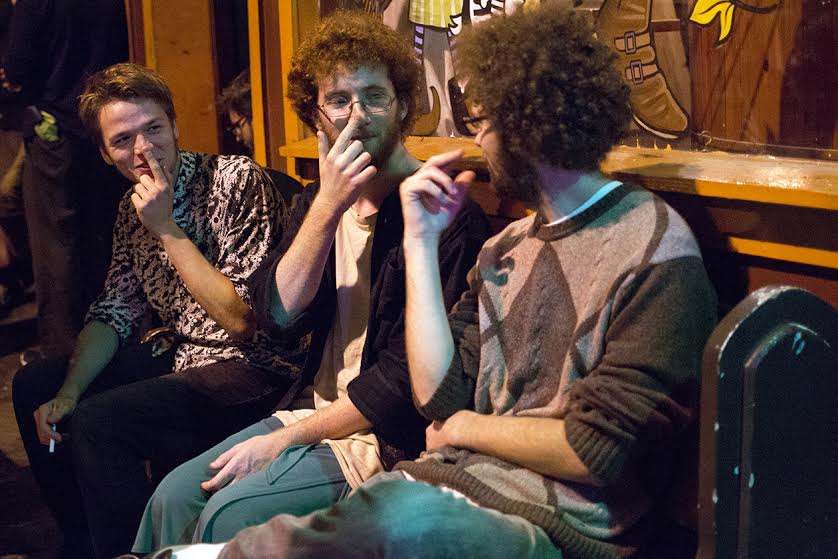 Realizing they forgot Bond’s snare drum, the members of Swamp play a game—seeing who touches their nose last—to determine who will be the person to fetch the drum before the show.

Swamp performs as the opening band at Flicker Theatre & Bar in early October.

Although Swamp plays concerts at venues downtown, the band prefers to play house shows, because of the more carefree attitude of the audience and increased crowd participation. “The difference between a house show and a venue show is that we don’t need to be as on-point,” Hunt says. “And we can have more fun and do crazier shit.” 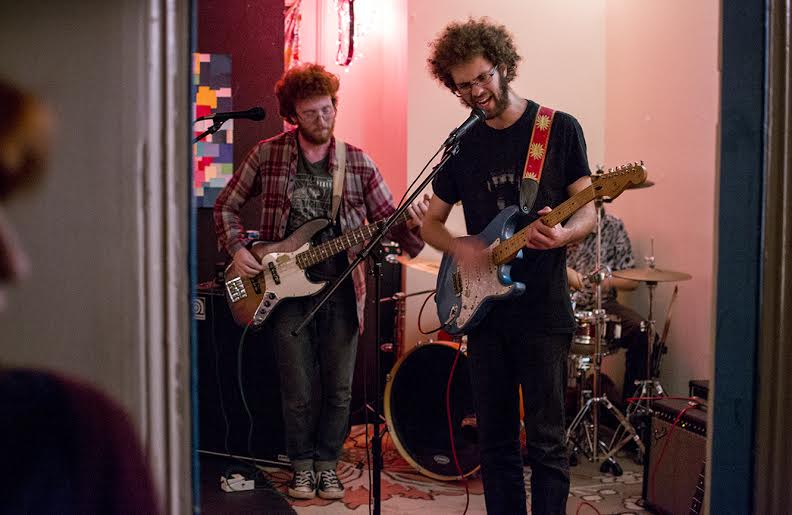 Swamp plays at a house party on Reese Street, and Hunt (right), sings while playing guitar after switching with Weigle (left), on bass.. 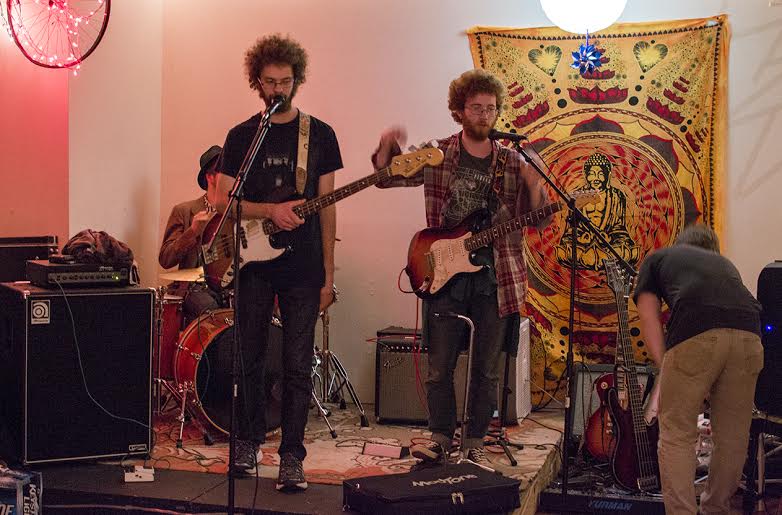 Swamp experiences sound issues at the beginning of their set. As a member of the band Hooker tweaks the knobs of the PA system, Weigle (center-right), dances on stage. 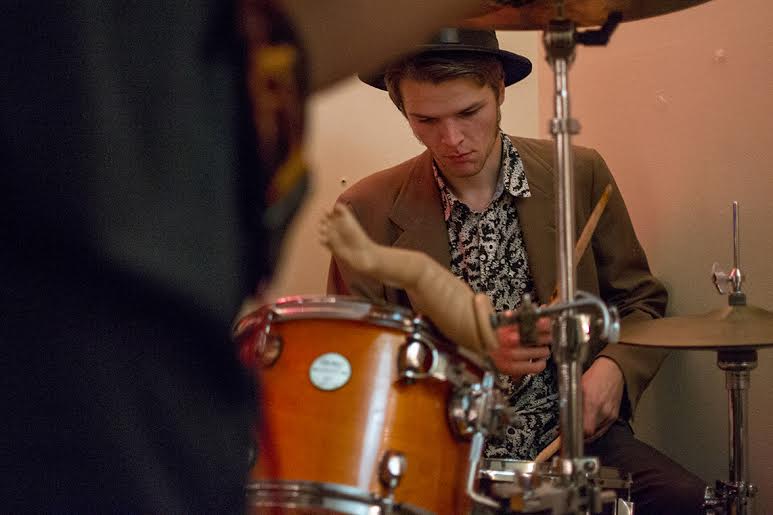 Playing on another drummer’s set, Bond places his signature baby-leg-attached-to-a-prosthetic-hook-arm prop to one of the crash stands, making it feel more like his own. 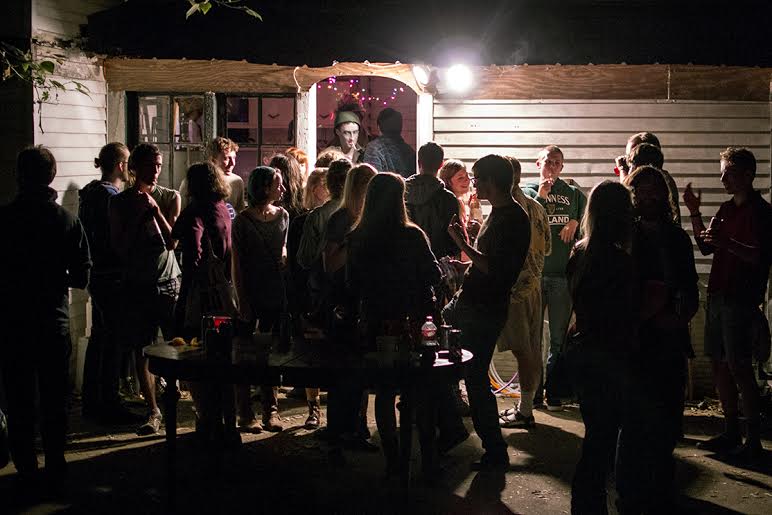 Before and during the band’s set, people congregate outside near the keg, playing beer pong, or walk back inside after filling up.