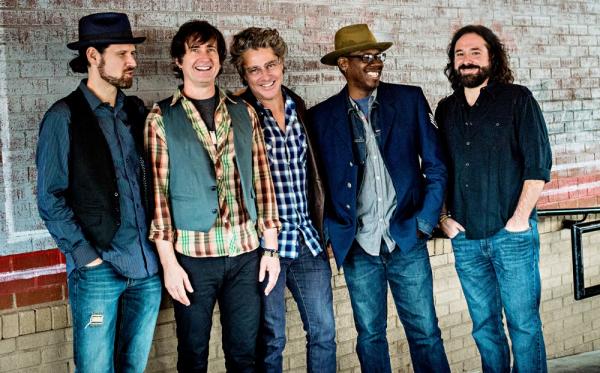 Collective Soul frontman Ed Roland is in town, but don’t expect to hear “Shine” blasting from the interior of a local music venue. Roland is performing a residency at The Melting Point, Sundays through February 17 at 7:30 p.m., with a new group, The Sweet Tea Project. Intrigued by Roland’s turn toward a rootsier, Americana sound, Flagpole caught up with him to hear his plans for the new band.

Flagpole: How did The Sweet Tea Project come to be?

Ed Roland: Everything happened naturally. I’m in a band called Collective Soul, and we had some time off about a year and a half ago. And some friends of mine on what I like to call the coffeehouse circuit—I have a studio in my home, and it seems like that’s where everybody ended up at 2 or 3 in the morning. So, I was like, “Hey guys, I’ve got these songs that I would not present to Collective Soul because it doesn’t fit that sound.” So we started playing, and it blossomed from there. We did a show and everybody was like, “Oh this is great, why don’t you record this?” And I was like, “Yeah, why don’t we?” So, it kinda happened naturally. Just dudes hanging out.

Who else is in the band?

The first record we made, it was an open-door policy. Anybody could come and play. Kevn Kinney [of Drivin’ N Cryin’] came and sang for me, and the lead guitarist in the band [Christopher Yates] has been on tour with everybody from TLC, Madonna—he just got off Justin Bieber’s last tour. It’s a broad spectrum of cats that are in the band.

When’s the record coming out?

The record’s coming out in 2013, we recorded last year. But over the holidays, we recorded another record that we’ll release at the end of the year. We have 24 songs recorded. The first record will be released in April—it’s called Devils N Darlins—and the second one we hope to release at the end of the year, but if not, it’s next year. It’s basically completed, also.

How are The Sweet Tea Project’s songs different from Collective Soul’s?

With Sweet Tea, these songs I wrote were a little bit more personal and [like] storytelling. I staretd to co-write with the guys, and it took on a whole different feel, whereas with Collective Soul, I write everything and usually I’m on the back of a bus. This, I kind of got to jam out with guys and figure out what we’re doing. So, I took a different approach, not only instrument-wise [with things like mandolin and banjo], but also lyrically.

What did you learn from co-writing?

I learned a lot. With Collective Soul, it’s been my band. I started the band just because I wanted to be the songwriter. Whereas with Sweet Tea, you kind of branch out, you know, later years in your life, you become less controlling, I’d like to think. And of course I learned. I’m going to co-write with the guys in Collective Soul on the next record, because it just opened me up. You learn all kinds of different things, from phrasing to words that you necessarily wouldn’t use in a song because you don’t use them in everyday speech. But if you work with other people and they use different words or ideas—the phrasing’s the one thing I learned more than anything. You know, being with Collective Soul and sitting in the back of a bus, it kind of becomes a pattern, in a sense. With co-writing, it’s opened me up to a lot of different things, like vocabulary and rhythm and timing.

Who has been the most influential person in Sweet Tea in that way?

Oh, Christopher Yates! The first band I ever was in was his band. They were a Six Flags band, and they needed a lead guitarist, and I auditioned and I met him and they were kind enough to ask me to join the band. A couple months later, I was like, I’m not playing any cover tunes; I want to play my tunes. So I took the band over. I’ve known Christopher since I was 18 years old, and we’ve gone through a lot of things, as any relationship does over the years. He’s a wonderful songwriter himself, and a great musician. He’d be my partner in crime in this.

You’re a Southerner, and The Sweet Tea Project sounds much more Southern that anything you wrote with Collective Soul. What is it about this music and this time in your life that made you want to explore those roots?

I was born in Atlanta and never left, even with Collective Soul. I always [lived] in Georgia, but I was never here. So, the couple months I had off, when Sweet Tea [started], I was home. So I kind of naturally absorbed those sounds. I grew up in the ’80s, so I’m a New Wave baby, for lack of a better term. But when I got home, I started to listen back to what I like to call the troubadour years—Jackson Browne and Elton John. I was like, man that’s beautiful, the stories and the harmonies. I hate labeling, I think that’s the worst thing you can do to music or a person, but more Americana. And I just kind of felt at ease with that. I settled into my Lay-Z-Boy in my living room and realized I’m from the South.

What are your goals for The Sweet Tea Project?

Ed Roland and The Sweet Tea Project play the Melting Point every Sunday through Feb. 17.