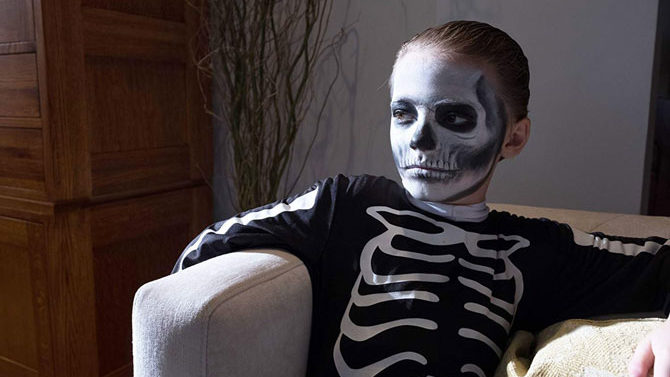 A young couple (Taylor Schilling of “Orange Is the New Black” and Peter Mooney) are struggling to have a child. When they finally have a son, Miles (Jackson Robert Scott), he turns out to be a prodigy. The movie also strongly implies an awful serial killer (Paul Fauteux) who likes to cut the hands off his victims before killing them died at the same time Miles was born. As Miles grows up, his extreme genius takes on a dark side. A babysitter ends up severely injured, he savagely beats a classmate with a giant wrench, and the family dog goes missing. (Prepare accordingly if such grisliness troubles you.) Eventually, Miles’ troubled mother, Sarah, finds answers from a doctor played by Colm Feore. (It is rarely a good thing if Feore shows up to help with your problem.)

The Prodigy gets off to a good start, opening with the old Orion Pictures logo and a ’70s-style font, and never really falters. This subtle twist on the killer-kid genre is far from buzzworthy, but it is bleaker than expected. Director Nicholas McCarthy made a solid debut in The Pact (worth streaming if you are interested), and his first major release (I do not recall his second flick, At the Devil’s Door, getting much of a release) is a solid entry in the popular horror subgenre. Some of the parenting dilemmas and moral quandaries outweigh the silly mumbo jumbo that could derail a less mature horror flick.