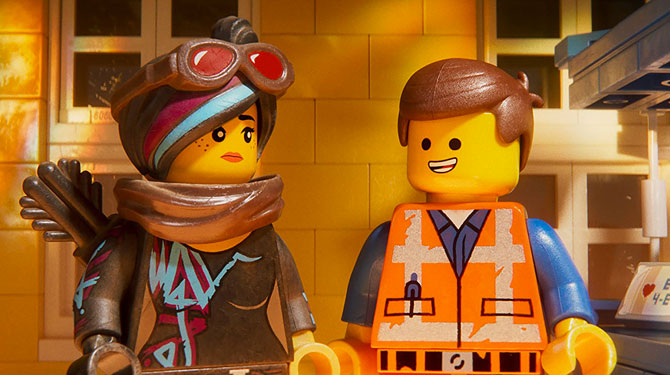 The Lego Movie 2: The Second Part does not break or rebuild what does not need breaking or rebuilding. Lego Movie master builders Phil Lord and Christopher Miller may only provide the sequel’s script—Mike Mitchell, who directed the underrated Sky High, is in charge—but what the duo construct is as awesome as the original. It actually works better now that the secret of the real world is out of the bag. Perceptive moviegoers should have no trouble deciphering the clues needed to uncover this film’s mysterious cataclysm.

The Lego Movie 2 picks up where the previous film left off. Duplo—bigger Lego bricks intended for smaller hands—aliens have invaded, decimating Bricksburg and turning it into the Mad Max-ian Apocalypseburg. Still, Emmet Brickowski (v. Chris Pratt) thinks everything is awesome, even as his girlfriend, Lucy, aka Wyldstyle (v. Elizabeth Banks), broods over the dystopian landscape. When General Mayhem (v. Stephanie Beatriz) arrives and kidnaps Lucy, Batman (v. Will Arnett) and some of Emmet’s other pals, the eternal optimist blasts off into the stars to rescue them from Queen Watevra Wa-Nabi (v. Tiffany Haddish), who may or may not have nefarious intentions, despite her welcoming song and dance, “Not Evil.” Fortunately, Emmet meets Rex Dangervest (also voiced by Pratt), a galaxy-hopping, cowboy/raptor trainer who helps him reach the Systar system, where his pals are being held captive for a royal wedding.

The first film revealed that the Lego world exists due to the real-world play of Finn (Jadon Sand) and his sister, Bianca (Brooklyn Prince), two lucky kids who have access to an extraordinary number of Lego bricks. Lord and Miller take advantage of this audience knowledge to generate deeper empathy for its plastic persons if Emmet fails. Naturally, this compassion is entertainingly besieged by pop culture jokes and contagious earworms, like “Catchy Song,” expected by fans of the first Lego Movie.