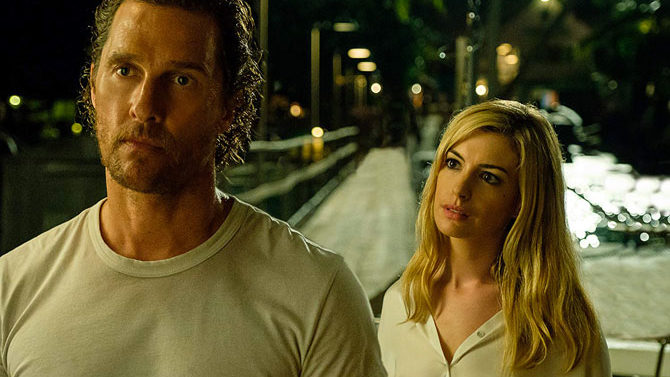 Talk about a movie without an audience. The audience attracted by Serenity’s Matthew McConaughey and Anne Hathaway film noir-ish illusion will be at best confused by and at worst angry at its trickery. McConaughey stars as Baker Dill, a charter boat captain paid to ferry tourists visiting Plymouth Island who are interested in catching some big fish, as well as some rays. Baker is more obsessed with catching the big one that keeps getting away than he is making a living when a blonde femme fatale, Karen Zariakis (Hathaway), appears with a $10 million scheme to kill her abusive husband, Frank (Jason Clarke, reveling in Frank’s supreme nastiness). Apparently, Baker had another life once, and Karen is his ex-wife. She even baits her hook with the safety of their teenage son, Patrick (Rafael Sayegh), who is a target of Frank’s rage.

Or so it all seems, until a persistent tackle company representative named Reid Miller (Jeremy Strong) blows up the entire narrative. McConaughey has not sweated this much since 1996’s A Time to Kill—it’s hard work selling writer-director Steven Knight’s script. Were the movie to remain a sexy, noir-ish crime drama throughout, it would please a small adult audience and quickly be forgotten until its inevitable airings on cable. McConaughey bares so much skin, the movie is likely to start rumors he has the lower anatomy of a Ken doll, and Hathaway has matured into a terrific Barbara Stanwyck.

Just as the film gets comfortable with itself, Knight makes a sharp turn into a subpar “Black Mirror” episode. The move may make the movie more original than it first appears, but originality is not always an improvement.