The Kid Who Would Be King Review 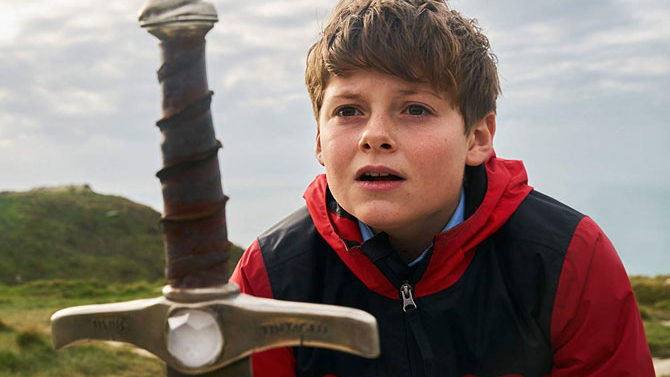 Remember Attack the Block, the awesome flick where aliens attack street-smart English teens starring current Doctor Who Jodie Whittaker and new Star Wars hero John Boyega? A bloke named Joe Cornish, who also helped write Ant-Man, directed it way back in 2011, and surprisingly, The Kid Who Would Be King is his second feature. Less surprisingly, his earnest new movie is a winner for the kids at whom it is aimed and their adult companions who grew up on similar fare in the 1980s.

Cornish’s revisionist take on the King Arthur legend sees 12-year-old Alexander Elliot (Louis Ashbourne Serkis, the son of mocap legend Andy Serkis) as the new owner of Excalibur. Along with a hand-jiving Merlin (Angus Imrie as a teenager, Patrick Stewart as a grown-up) and his chosen knights—best pal Bedders (Dean Chaumoo) and two bullies, Lance (Tom Taylor) and Kaye (Rhianna Doris)—Alex must defeat Morgana, Arthur’s half-sister and the last of the Pendragon line, before she destroys the world. (Were you expecting a more original villainous plot?)

Sure, The Kid Who Would Be King is a knockoff of a knockoff of Harry Potter. Is Percy Jackson author Rick Riordan more disappointed that Cornish got to this idea before he did, or that the talented filmmaker was not in charge of the adaptation of his flagship series, which appears worse in the rearview mirror? One of the movie’s most armored suits is that it is not a movie made for adults costumed as a kids’ movie. The Kid Who Would Be King should hit a bullseye with its target audience. Cornish remembers the heroic dreams of childhood and throws in enough teachable afterschool-special moments to make everybody feel better about all the bloodless combat.