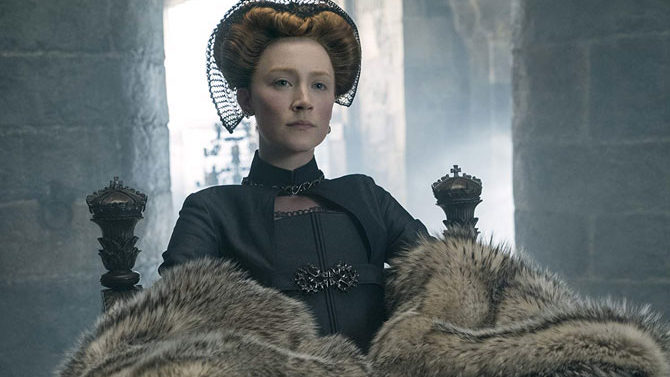 This winter’s royal double-feature of The Favourite and Mary Queen of Scots should take care of anyone laboring under the illusion that being queen was a blast. In 1561, Mary Stuart (Saoirse Ronan) and her cousin, Queen Elizabeth I (Margot Robbie), both held legitimate claims to the English throne, but Elizabeth was Protestant at a time when England had just made the switch from Catholicism. A staunch Catholic, Mary did not provide the right optics.

The script, by Beau Willimon, who created Netflix’s “House of Cards,” is titillating, if less fun, than that of The Favourite. Heavy lies the crown, but Ronan wears it well, while Robbie spent more time in the makeup chair as Elizabeth’s style goes from Johnny Depp’s Mad Hatter to It’s Pennywise. Since the movie is about Scotland, former Doctor Who David Tennant shows up as John Knox to yell mean things about Mary—but it’s OK, because he is so good at yelling.

In her directorial debut, Josie Rourke relies heavily on her theatrical background, so do not expect the highflying cinematic shenanigans of Shekhar Kapur’s Elizabeth. Mary Queen of Scots would have been better received were it a BBC production seen on Netflix, HBO or PBS.