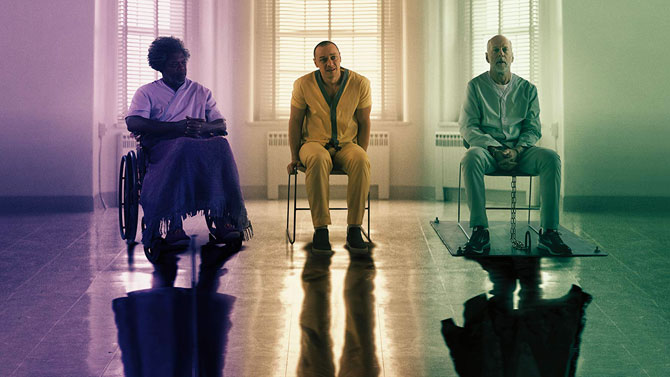 Nineteen years ago, M. Night Shyamalan followed up The Sixth Sense with Unbreakable, a somber rumination on superheroes. Now, that vastly underrated film has a sequel. Thanks to a single scene—Shyamalan’s best twist in a career that has risen and fallen on final-act revelations—2016’s Split was bound to Unbreakable, a standalone entry in a franchise held together by the barest of threads.

David Dunn (Bruce Willis), now known as the Overseer, and his archenemy, Elijah Price, aka Mr. Glass (Samuel L. Jackson), finally return to do battle, but since Elijah’s bones are so brittle, he needs a proxy for the climactic showdown. The mastermind enlists the Horde, a poor guy named Kevin (James McAvoy, who deserves all the awards he did not win for Split), whose multiple personalities prepare the way for the animalistic Beast. Good and evil plan to do battle on the streets of Philadelphia—that is, if they can get out of the psychiatric hospital where they are being treated for superhero disorder by Dr. Ellie Staple (Sarah Paulson).

Glass enters a world much changed. The pop-culture landscape to which Shyamalan introduced Unbreakable was not like our current superhero-filled (some might say plagued) era. Superman and Batman had not appeared on the big screen since 1987 and 1997, respectively. X-Men had only debuted a few months earlier. Sam Raimi’s Spider-Man would not make his first appearance until May of 2002, and the Marvel Cinematic Universe would not be born until 2008’s Iron Man. So, when Unbreakable debuted in November 2000, superhero movies were not a dime a dozen and the most reliable studio tentpoles.

Since then, society has resoundingly answered “yes” to the questions asked in Unbreakable. Now, we must deal with the aftermath of that decision. The less artistic Glass wonders why society now wants comic-book heroes so badly when they have been here for years, languishing at the kiddie table.

Before Shyamalan destroyed his career through a hubristic belief in the infallibility of his revelations, a giant superhero property was only another hit away for the young filmmaker, who excelled at restrained direction and clear narratives. Now, he has revived his career with a sequel that may be better thanks to distance and changing tastes. Glass is the first film of M. Night’s second period to feel like it belongs with the hits from the first.