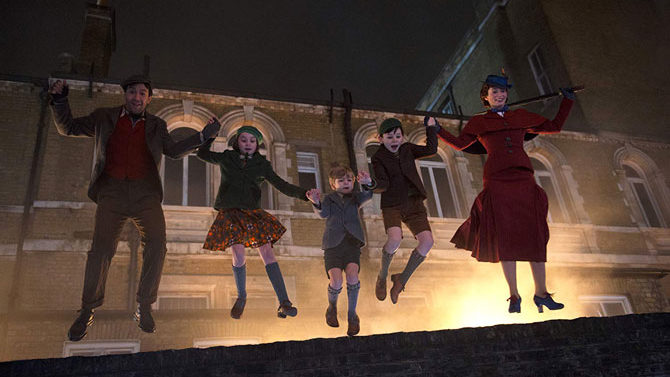 This Mary Poppins sequel—some of my family members confusedly expected a remake—is not practically perfect in every way, though its flaws are mostly musical, as you will not remember one single song once the credits have rolled. Why cast Lin-Manuel Miranda as the new Dick Van Dyke—a singing, dancing lamplighter named Jack—if you are not going to let him punch up the songs?

If you can get past how poorly the sequel compares to the original musically—obviously, I cannot—you can be swept away by Emily Blunt’s enigmatic take on P.L. Travers’ flying nanny, who has returned to help the now grown-up Banks children, Michael and Jane (Ben Whishaw and Emily Mortimer) again. The movie has its standout moments. Meryl Streep makes a nice addition to the Poppins-verse as Mary’s upside-down (only on the second Wednesday of the month) cousin, Topsy, and Marshall shows off his choreography background when the lamplighters jaw-droppingly “Trip a Little Light Fantastic.” If Blunt’s Mary happens to drop by again—hopefully, in less than 54 years—remind her to bring some more supercalifragilisticexpialidocious songs.