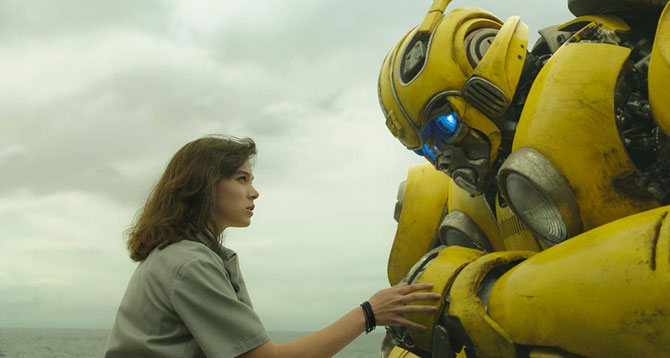 The fifth Transformers movie, The Last Knight, easily reached the series’ peak of goofy fun, but Bumblebee, a prequel to Michael Bay’s bombastic actioners, is the most spiritually faithful to Hasbro’s popular robots in disguise since 1986’s animated feature. It even has Stan Bush’s “The Touch,” a nod to the animated movie I have only been expecting since Bay’s 2007 blockbuster kicked off this highly anticipated, violently disappointing franchise.

Set in 1987, Bumblebee focuses on newly 18-year-old Charlie (Hailee Steinfeld), who finds the titular yellow Autobot in her uncle’s junkyard. Naturally, a shadowy government organization—represented by a properly humorous John Cena—and two exceptionally mean Decepticons voiced by Angela Bassett and Justin Theroux are also after Bumblebee, who was sent to Earth by Autobot leader Optimus Prime.

Director Travis Knight (Kubo and the Two Strings) and writer Christina Hodson perfectly meld ’80s coming-of-age flick—the soundtrack is absolutely perfect—with the blockbuster robot-on-robot action audiences have come to expect to create a Transformers with heart and humanity. Bumblebee feels like a long-lost ’80s flick you grew up loving. Too bad the movie simply sets up the five bellicose Transformers we already have, rather than its own kinder, gentler series.