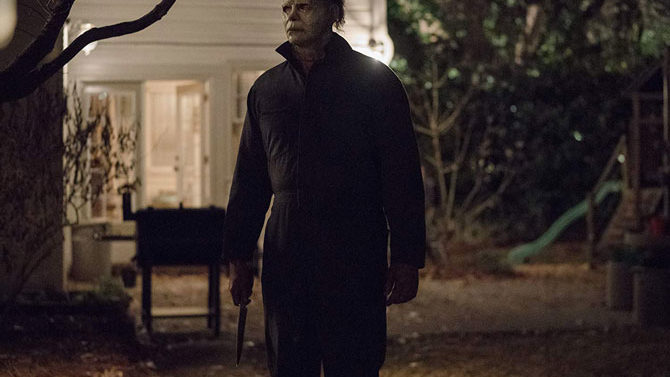 Considering Halloween has been my traditional answer to the oft-asked question about my favorite movie since high school, my reaction to David Gordon Green and Danny McBride’s sequel—the 11th film in the long-running horror franchise—is complicated. For the average filmgoer simply looking to get their horror rocks off during the month of October, Halloween will do the trick.

Ultimately, the movie does not feel that different from its predecessors (aside from the atrocious Halloween: Resurrection), though it stands on its own as the best-made Halloween since the original. The contributions of Carpenter, who is as close to a film god as a mere mortal can be, as composer (again), as well as executive producer and “creative consultant,” certainly helps this Halloween feel like the first entry since 1981’s original sequel to take place in the same Haddonfield originally terrorized by Michael Myers.

Jettisoning the baggage of the six direct sequels, Green, McBride and Jeff Fradley posit that Michael Myers was recaptured on that fateful Halloween night in 1978 and re-institutionalized at Smith’s Grove Sanitarium for the next 40 years. Since then, he has not spoken a word, continuing the long-held theory of his original doctor, Sam Loomis (the late, great Donald Pleasance, whose presence is missed), that Michael is the physical embodiment of evil.

Enter two true-crime podcasters (Jefferson Hall and Rhian Rees), who want to delve into the events of this 40-year-old killing spree by callously confronting Michael with his true face: the decomposing mask he wore in 1978—it hardly resembles the modified visage of William Shatner anymore—just in time for his transfer to a new facility. Later, they attempt to interview lone survivor Laurie Strode (Jamie Lee Curtis), whose brand of PTSD has turned her into a survivalist who, like Michael, has waited 40 years for another confrontation.

Minus the intriguing setup, the movie plays like a standard albeit well-made Halloween sequel. Michael haunts the streets of Haddonfield, hunting down teens and isolated women in bathrobes with whatever implement he can get his giant paws on. This Michael is not Rob Zombie’s Halloween big, but stuntman James Jude Courtney definitely possesses as intimidating a presence as Michael has ever had. Eventually, the longed-for confrontation between Michael and Laurie unfolds in what stands out as the tensest sequence in all 11 films. Not even Laurie’s original walk through the haunted Wallace house was more nerve-wracking.

In their setup for what is in essence Halloween 2 Redux, McBride and Green mine the canon even while jettisoning its most famous revelation—that Laurie is Michael’s other sister. Thankfully gone is the Thorne/Druid mythology unwisely introduced in Halloween 6 to explain Michael’s truly evil nature. McBride and Green shrewdly acknowledge the appendages they excised by inserting ever-popular Easter eggs like the opening credits, snippets of lyrics, repeated dialogue, even the family of newly added potential victims.

Nevertheless, for all the crafty filmmaking—Green is by far the highest quality behind-the-scenes talent the franchise has seen outside of Carpenter—the idea of retconning Halloween on a big anniversary is far from original. Halloween H20 did the exact same thing in 1998. Even their new take on Laurie Strode is not that fresh; one or both of them must have recently watched Terminator 2 before coming up with their older, more dangerous Sarah Connor—I mean Laurie.

Still, the entire project is ambitious for a slasher sequel and ultimately works. The kills should be grisly enough to satisfy the new kids, while the older kids get their kicks out of seeing Halloween returned to its Carpenter roots. Now, we sit and ponder how Halloween will be renovated when it turns 60.