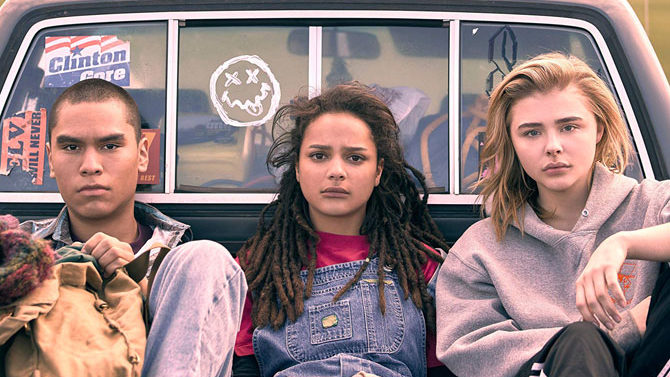 After being discovered in the back seat of her prom date’s car with another girl from her bible-study group, Cameron is sent to God’s Wisdom by her evangelical Aunt Ruth (Kerry Butler). At God’s Wisdom, Cameron and other teens—wild child Jane (Sasha Lane), politician’s son Adam (Forrest Goodluck, who made his debut as Leo’s son in The Revenant and shines here) and more—struggling with their homosexuality are preyed upon by Rev. Rick (John Gallagher Jr.) and his psychiatrist sister, Lydia (Jennifer Ehle).

The Miseducation of Cameron Post radiates 1993. Akhavan captures the little moments of ’90s reality with incredible accuracy (of course Cameron’s Breeders tape came from Columbia House). The momentary snapshots at Cameron’s prom could come from my own high-school rite of passage. (I do wish the filmmaker had scored that sequence to a timely hit of the era.)

However, prom is where Cameron’s normal life ends and the film begins. Akhavan and her co-writer, Cecilia Frugiuele, bravely and caringly adapt Emily M. Danforth’s novel. The teens are unwilling victims of emotional—never physical—abuse, yet Akhavan refuses to treat their abusers like the one-dimensional villains one expects from a movie about as insidious an action as gay conversion therapy, which probably makes the sibling duo even more sinister. In The Miseducation of Cameron Post, the 1990s, that golden decade of independent and queer cinema, are alive and well.