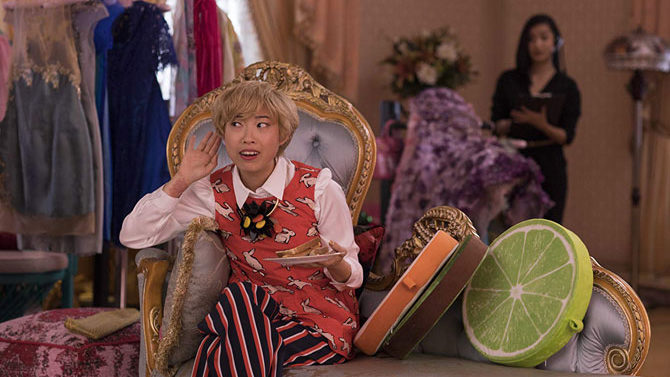 Easy as it may be to find fault in the cinematic adaptation of Kevin Kwan’s global bestseller, it is simpler to sit back and enjoy the vacation to Singapore. Rachel Chu (Constance Wu) is the daughter of a single mother who emmigrated from China. Now a professor of economics at NYU, Rachel has snagged a catch in Nick Young (Henry Golding). He is nice, attractive and funny; what she does not know until they are in first class on the way to meet Nick’s family is that said family is old Singapore money—near-royalty in a region of the world where actual monarchs reign. For the audience, Nick’s opulent wealth means we are in for the trip of our lives, enjoying Singapore like only the 1 percent can. For Rachel, it means a few angry looks; a dead fish in her bed, like she had refused a request by the don; and Nick’s resentful mother, Eleanor (Michelle Yeoh).

Not a single moment of Crazy Rich Asians surprises. Hollywood has been plying this sort of family drama since its golden age, when studios ruled but movie stars shone brighter than actual stars. It’s the stars of Crazy Rich Asians who push through the hoary drama of disappointed parents and haughty rich people. Wu is as funny and gorgeous as the role requires; she channels both Hepburns, as well as modern romcom icon Julia Roberts. (If Hollywood were fair, this film would send Wu to the A-list like Pretty Woman did Roberts.)

As strong as her chemistry with Golding is, any scene featuring both Wu and Awkwafina’s Peik Lin wins the movie. Some discomfort arises from the ostentatious wealth on display—the film shares some wishful-watching DNA with Bravo’s reality lineup—but among these rich folks, even the mean ones are a lot more human.