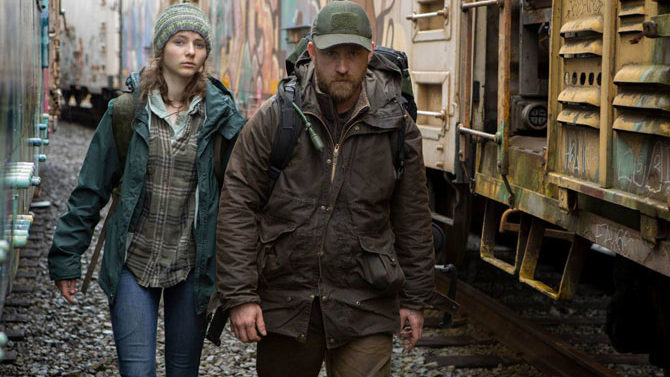 The arrogance of “normal” undergirds this sweet story of an unhomed father and daughter after they are uprooted from their camp in the woods outside Portland, OR. Single father Will (Ben Foster) is struggling to raise his daughter while suffering from PTSD from his time in the military. His answer is to live a solitary life of subsistence. This survivalist existence is really all Will’s teenage daughter, Tom (Thomasin Harcourt McKenzie), knows. All we learn of Tom’s mother is that she died before Tom was old enough to remember anything about her.

After a runner sees Tom, the duo are rounded up and placed in a house, where they are tasked with living the life dictated by society. Will is given a job working on the Christmas tree farm owned by their generous benefactor (popular television genre actor Jeff Kober). The paperwork is begun for Tom to attend school, but she never does, as peripatetic Will feels the urge to keep moving. But now that Tom has a taste of a steady life in a home with a roof and other amenities, she begins to question a rootless existence.

Debra Granik’s first narrative feature since the brutal chill of Winter’s Bone is equally moving, if ultimately kinder; this world, adapted by Granik and Anne Rossellini from Peter Rock’s novel My Abandonment, is populated by so many kind souls, including Winter’s Bone matriarch Dale Dickey. While these cinematic worlds may differ, the films do have in common a revelatory breakthrough performance from a young lead actress. McKenzie’s highest-profile performance to date is just as stunning as Jennifer Lawrence’s was. Further comparisons with Lawrence are futile, but Granik certainly can be complimented for her eye for talented young actresses.

The second half of 2018 opens strong, with a consensus candidate for the year’s best film. Only time will tell if it has the staying power to fight off the heavy hitters coming in November and December.